Have you ever wondered what it was like to live in that dark period of our nation's history when the free press was shut down, the voice of the people was suppressed, and thousands of Filipinos were abducted, tortured and summarily executed?

The University of the Philippines is again living up to its reputation as the bastion of youth social consciousness, this time through a obstacle run that will give runners a taste of what it was like during the years of Martial Law.

Dubbed The Great LEAN Run (TGLR), the activity will feature obstacles reminiscent of dictatorial rule, such as barbed wire, water cannons, anti-riot police, arbitrary arrests and much more.  Runners will aim to survive the challenges of the course for a chance to win prizes, not to mention unique bragging rights.

TGLR honours the life of Lean Alejandro, student leader of the 1980s who led the student movement that helped a national people's action to depose then President Ferdinand Marcos.

Atty. Susan Villanueva, Chairman of the UP SAMASA Alumni Association, said, "The overthrow of the dictator and our subsequent return to democracy is a major victory of the Filipino people.  The youth of today should be made aware of the real situation at the time so that they can learn from it and be guided by its lessons as they become the new leaders of the nation."

Proceeds of the obstacle run will go to the UP fund for the Liwasang Lean Alejandro.

The Great LEAN Run will be held on September 19, Saturday, 5:00pm at the UP Sunken garden and Academic Oval in Diliman.  Registration is ongoing online at the Great LEAN Run Facebook page and Chris Sports branches at SM Megamall, SM City North, Glorietta 3 and Metro Marjket Market BGC.  For details, interested participants may contact Irish Vayne  Alacar at  0906270646 and vayne.alacar@withoulimits.ph.

Posted by Thirdy Lopez at 5:37 AM 0 comments

Shop Anything, Anytime, Anywhere with the Lazada Mobile App!


MANILA PHILIPPINES – Lazada (www.lazada.com.ph) - the Philippines’ One-Stop Shopping and Selling destination continues to keep its commitment of effortless shopping to Filipinos with the Lazada Mobile App. Now, Filipinos have access to more than half a million products right at their fingertips. Giving Filipinos the power to shop anything, anytime, anywhere through the Lazada Mobile App. 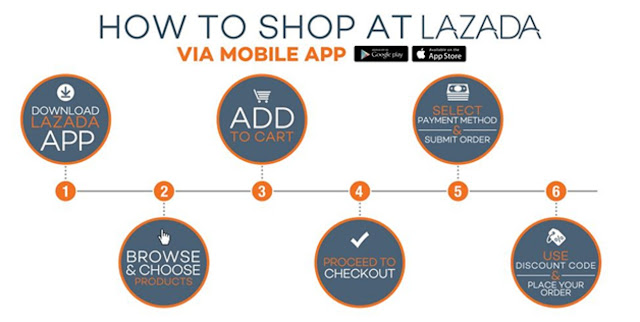 Effortless Shopping tips to all Shoppers On the Go::

Secure Shopping
·         For mobile shopping, choose shopping sites with an app. It’s easier to use and most importantly, more secure as it’s harder to tamper with.
·         Check news articles about the shopping site to ensure it’s not a temporary online shop that will disappear after pocketing your money.
·         Ensure the shopping site has a return policy such as Lazada’s Buyer Protection: online shops without return policies can mean scam or unauthentic products.
·         Do not give your password to anyone. Online shops’ email support or call support personnel should never require your password for identification.
·         Only use your credit or debit card on sites with a padlock icon in the URL bar. This means the site uses secure communications to prevent any third-party eavesdropping.
·         Check for security labels such as PCI-DSS certification. This means the shop has been audited and is certified safe to use.
·         If you don’t receive an acknowledgement email from the online shop shortly after a purchase, there might be an issue with your purchase or it might be a scam. Call the site’s hotline to verify.
·         If you strongly suspect you have been scammed and your credit card information has been stolen, contact your bank or credit card issuer to block the card and investigate.

Savvy Fashionistas
·         Pick the right size by using the size chart feature, taking your measurements and checking carefully for any international conversions (UK, US, EU, Japan).
·         Ensure the site has an exchange policy like Lazada’s 100% Satisfaction Guaranteed policy that enables you to return clothes within 7 days, and re-order the outfit in a size that fits you perfectly.
·         Only shop for fashion on shopping apps that provide a few angles so you can see exactly how the clothes fit on the model or mannequin.
·         Get your friends’ comments or ‘likes’ easily by sharing the item on Facebook or Instagram before buying.
·         Read product details to check on the fabrication so you’ll know how the clothes feel on you.

Parenting Shoppers
·         Spend quality time with your family instead of getting caught in traffic to the shopping mall. Shopping at the Lazada Mobile App lets you shop at your convenience, any time of the day!
·         Diapers and milk powder are not only expensive, but heavy to carry. Look out for online promotions and take advantage of door-step delivery.
·         Follow the Lazada Super Moms Facebook page and subscribe to the newsletters to get the latest deals delivered straight to you.
·         Don’t let getting overwhelmed in crowded malls and toy stores stop you from giving the best to your kids. Shop for educational toys online, conveniently.
·         If you’ve brought the wrong size of maternity clothes, take advantage of Lazada’s  100% Satisfaction Guaranteed policy. Return the wrong size within 14 days (30 for Vietnam), and re-order the outfit in the right size.

Tech Addicts
·         Online shopping allows you to compare prices for your favourite gadget. Do keep a look out for sellers on the same site that may offer a bigger discount or bundle deal.
·         Searching for phone accessories, power banks and covers is less overwhelming online as you can easily compare your options and colors, and sort them by price.
·         Subscribe to Lazada’s newsletter or like our Facebook page to get news on exclusive and limited edition tech launches.
·         When looking for a gadget in a specific model or colour, check out Lazada’s wide range online first. It’s better than visiting the retail store and discovering the gadget’s sold out.
·         Shopping for your favourite gadget online is easy. You can do it anytime of the day with fast and reliable delivery to your home or office.

Smart Savers
·         Take advantage of free shipping if you spend a certain amount, or do a group order with friends so you can all enjoy free shipping.
·         Download the Lazada mobile application to enjoy special app-only discounts and access sales anywhere, anytime! Turn on push notifications on mobile to stay updated on the latest promotions.
·         Watch out for time-sensitive flash deals, set your alarm so you don’t miss the promotion!
·         Look out for exciting promotions from our bank partner with store-wide discounts.
·         Sign up for newsletters for sale promotions and coupon codes.
·         “Like” the Lazada Philippines (www.facebook.com/LazadaPhilippines) on Facebook to get notifications on the latest deals.
·         To have a truly effortless mobile shopping experience, download the Lazada Mobile App and join Lazada’s Big App Sale happening this August 27-31 and enjoy as much as 80% discount from your favourite brands.

The Lazada Big App Sale: A Shopping Treat for all those Shoppers On-The-Go! 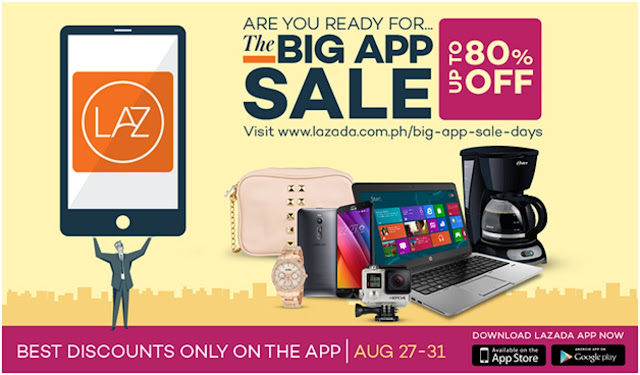 Lazada Philippines is again rolling out five (5) days of non-stop shopping deals for all Filipinos to enjoy. Packed with deals, discounts, and games, the Lazada Big App Sale (www.lazada.com.ph/big-app-sale-days/) is Lazada Philippines’ way of making shopping more enviably effortless, enjoyable, and fun for Filipinos through the Lazada Mobile App.
With as much as 80% exclusive discounts on bestsellers and favorite brands, the Lazada Big App Sale boasts hundreds of thousands of products all housed in the Lazada Mobile App.

So save and shop now with the Lazada Mobile App and be part of the Lazada Big App Sale(www.lazada.com.ph/big-app-sale-days/) this August 27-31.
Posted by Thirdy Lopez at 1:08 PM 0 comments