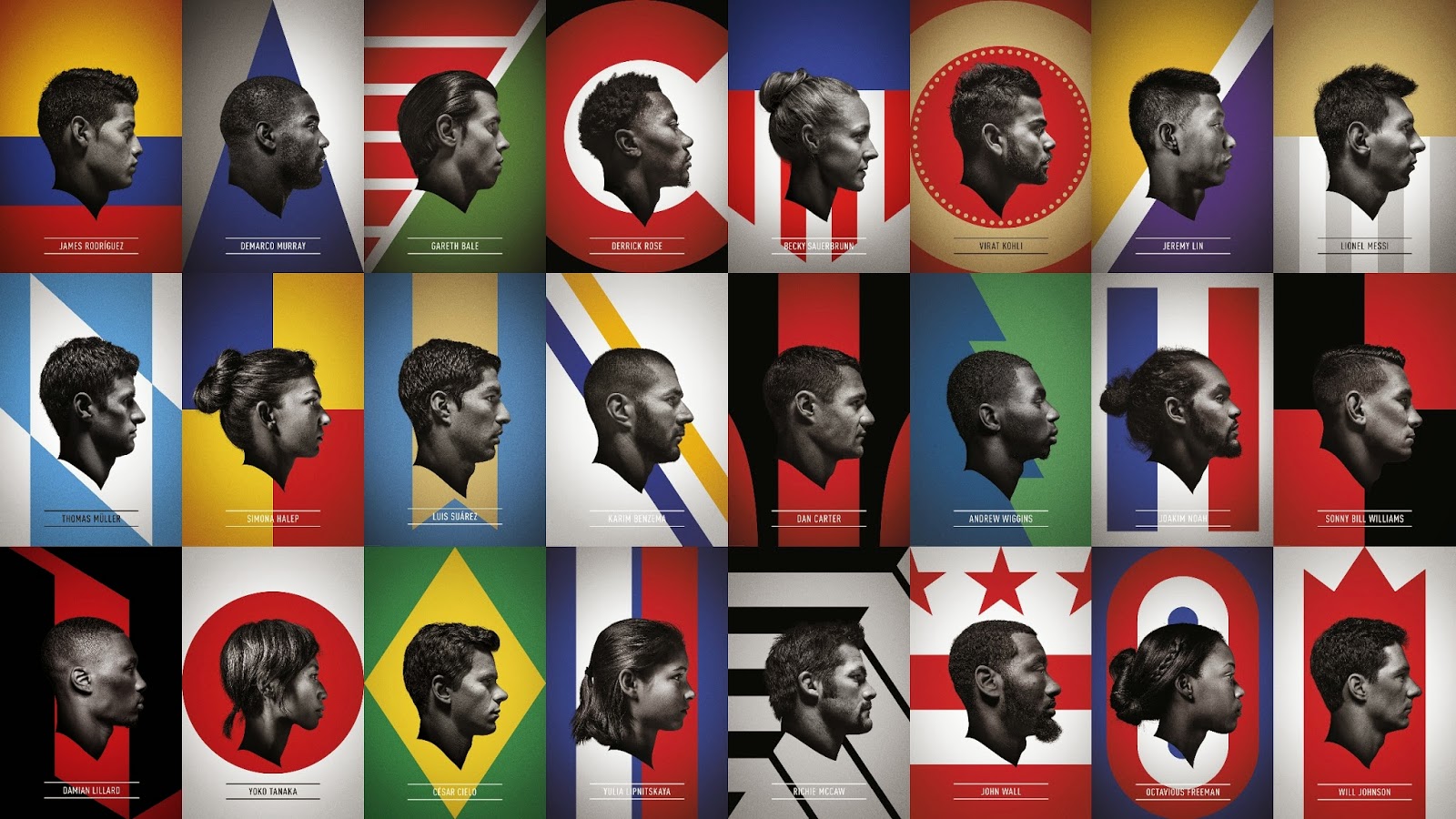 Herzogenaurach, February 2015 – adidas brings its passion for sport to life with the roll-out of a series of films - Sport 15. All films are based on the insight that sport happens in moments. adidas celebrates the fact that every moment in sport is a chance to redefine yourself and create something new for you or your team.

In sport, no one owns today – every minute of every game is up for grabs and yours for taking. 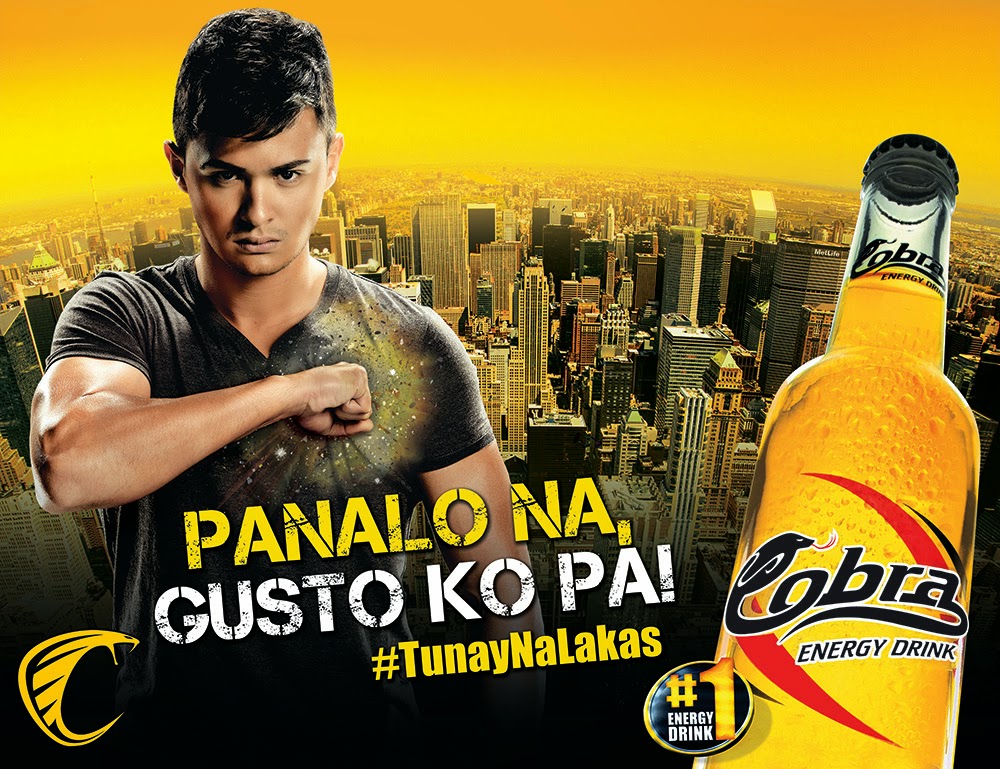 Whatever the challenge, despite all odds, Filipinos rise above them all. And there is only one drink that has powered up the Filipino spirit like no other – Cobra Energy Drink. From the demands of daily life to the tests of physical and mental endurance, only the country’s number one energy drink provides the right kind of energy for every situation.

Through the years, Cobra has evolved from powering Lakas ng Pinas to being a source of Tunay na Lakas. Now, as Filipinos take on a new role – from being copers adapting to circumstances, to seekers wanting more out of life, Cobra launches its most powerful campaign to date: Gusto Ko Pa. Driven by the need not just for the energy to see things through, but also for the inspiration to take it to the next level, Gusto Ko Pa is a rousing call to action from Cobra to want more out of life. 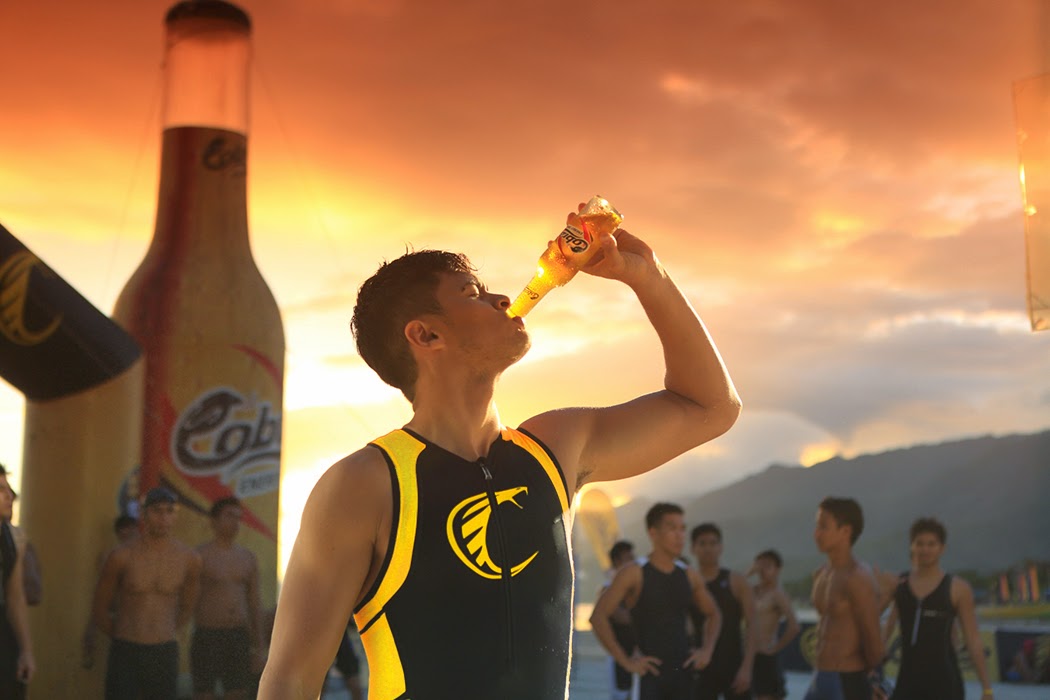 No one embodies these values more than Cobra Energy Drink’s latest endorser, Matteo Guidicelli. The multifaceted actor has evolved from being a multi-awarded racecar driver, to a triathlete of the country’s most grueling sporting event, and now a highly sought-after actor. With every endeavor, Matteo has excelled and exceeded, inspiring Filipinos to dream higher, work harder, be better.

“We asked ourselves, ‘What inspires Filipinos?’ before we came up with the new campaign. The answer was simple: We want more. Gusto Ko Pa is for all those who go above and beyond duty. When in sight of the finish line, they are already preparing for the next race. When met with a deadline, they are already rolling up their sleeves for the next task. This is where Cobra comes in, powering the passion for more. And this is where Matteo fit in, living up to the hunger to do more,” says Abe Cipriano, AVP for Marketing for Non-Alcoholic Division of Asia Brewery.

The new face of Cobra, Matteo Guidicelli, continues, “It is an honor to represent a brand that has fueled the Filipino spirit unlike any other. That they see in me the values that every Filipino strives for is an inspiration to be better at what I do now, and to work even harder for what’s next. I call on every Filipino to never settle, to find their passion, and to power themselves up with Cobra Energy Drink. I want this to become a rallying call for every Filipino –to do more, to be more, dahil ‘Gusto ko pa.’”
Posted by Thirdy Lopez at 9:00 PM 0 comments


Herzogenaurach – The adidas Group ranks third among the Global 100 Most Sustainable Corporations in the World (Global 100 Index). The results were announced by Corporate Knights, a Toronto-based media and investment advisory company, during the World Economic Forum in Davos. The adidas Group was recognized as best European company by Corporate Knights and as leader in its industry.
“We are absolutely excited about the recognition ‎our sustainability efforts are receiving. The nomination as one of the world's most sustainable companies underlines the great work our teams have been doing over the last years and the positive impact we have made. Through our work, we will continue to push boundaries as we strive to lead the way towards a sustainable future for our company and the entire industry,” says Herbert Hainer, adidas Group CEO.
The Global 100 Index is one of the most extensive data-driven corporate sustainability assessments in existence and is based on quantitative sustainability indicators covering economic, environmental as well as social aspects. The adidas Group has been listed in the Global 100 Index for several years, ranking eighth in 2014.
Companies named to the Global 100 index are the top overall sustainability performers in their respective industrial sectors. Listed companies must have a market capitalization greater than $2 billion (USD).
For full rankings please visit: Herzogenaurach, Germany (January, 2015) – The Energy Running revolution has taken a bold new step as adidas unveiled the greatest running shoe ever, Ultra BOOST. At a guarded launch location in New York City, Yohan Blake, David Villa, Sammy Watkins and a team of elite athletes pledged their allegiance to the revolution while hundreds of witnesses from around the world were onsite for the introduction of Ultra BOOST.

“To answer the world’s athletes’ call for more Energy we aimed to create the greatest running shoe ever and we’ve done exactly that with Ultra BOOST,” said Eric Liedtke, adidas Executive Board Member. “adidas has raised the industry standard with BOOST and will continue blazing a path in Energy Running for those who dare to follow.”

Ultra BOOST features 20 percent more* BOOST cushioning material, the highest Energy Return cushioning in the running industry, and has eliminated the traditional EVA midsole for more direct contact to provide the ultimate expression of BOOST. Made of thousands of unique energy capsules, BOOST delivers a consistent performance over hundreds of kilometres, in virtually any condition. 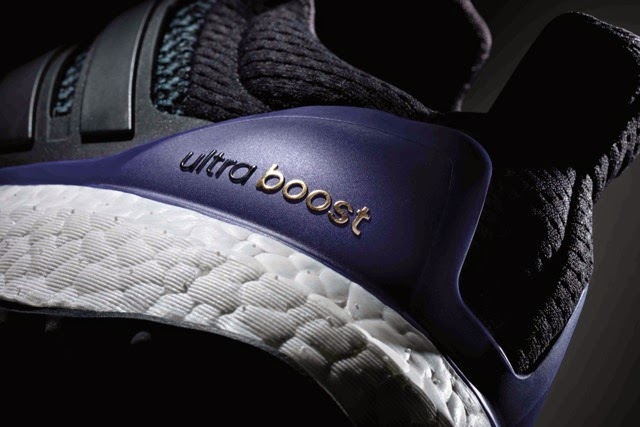 To complement the unrivalled Energy Return of BOOST, Ultra BOOST features an innovative update to adidas’ PRIMEKNIT technology built to reach new heights of comfort, support and style.
A runner’s foot can remarkably expand up to 10 mm or more in width while running. When restrained, this expansion can cause severe discomfort, friction and the leading injury in running, blisters. Unlike other leading knit technologies the innovative PRIMEKNIT pattern of Ultra BOOST provides comfortable support in less expansive areas of the foot and adaptive stretch where it’s needed to deliver maximum comfort.

“Each technology featured in Ultra BOOST was built to complement each other providing energized adaptability through a customized fit, look and feel,” said Ben Herath, Vice President of Design for adidas Running. “While we’ve taken innovation to the next level, the sleek silhouette of Ultra BOOST is built to look as good as it performs.”

One of the most advanced features of Ultra BOOST is the Stretch Web outsole that adapts and stretches to your foot strike and movement. The perforated elastic design harnesses and maximizes the Energy of BOOST without restricting any of its qualities. The unique appearance of the Stretch Web outsole is the perfect look to complement the eye-catching Energy capsules of BOOST.

Ultra BOOST also features an entirely new heel construction that frees the natural movement of the Achilles tendon. A carefully tuned external heel counter comfortably cradles the foot and adapts to the high extension of the Achilles. A new featherweight sock liner adapts to the runner’s natural foot form, for a customized fit and feel.
Ultra BOOST also boasts a new dual-density TORSION® SYSTEM, embedded into the shoe’s base. This allows more independent movement between heel and forefoot for superior stability and a smooth, more controlled run.

Your greatest run ever awaits with Ultra BOOST at www.adidas.com/ultraboost. adidas Ultra BOOST will be available in leading adidas stores in the Philippines and Runnr BGC from February 25, 2015 at P 8295.

Join the adidas Energy running movement by following @adidasph on Twitter or Instagram.
Posted by Thirdy Lopez at 6:00 AM 0 comments 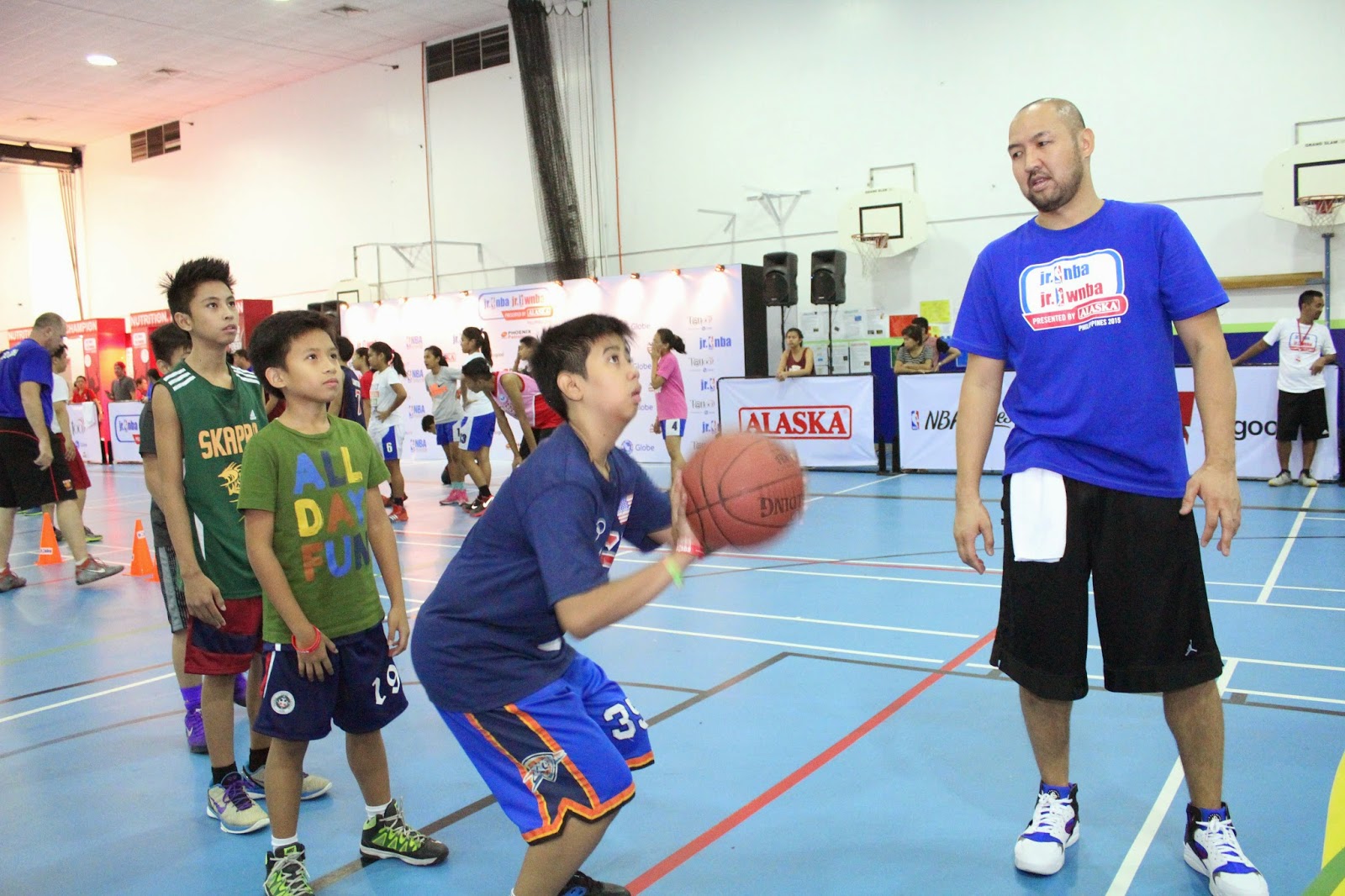 At the 2015 Jr. NBA and Jr. WNBA Presented by Alaska Tip-Off, Jan. 24, at the British School Manila, Bonifacio Global City, Philippine Basketball Association All-Star player and coach Jeff Cariaso has announced his return to Alaska to help the next generation of young and aspiring basketball players realize their dreams. The launch was led by Alaska Milk President and CEO Fred Uytengsu, NBA Country Manager for the Philippines Carlo Singson and Alaska Milk VP for Marketing Blen Fernando.

“This feels like a homecoming for me because I’ve always been proud to be part of Alaska. My job right now is to find the best basketball players for boys and girls around the country and help them develop to their full potential not just as players but also as persons and productive members of the community,” said Cariaso.

Cariaso started his 15-year career in PBA after he was drafted sixth overall by Alaska in 1995 where he also took the Rookie of the Year award that year. On his 2nd year in the league, he achieved a rare Grand Slam with the Aces. When Jeff rejoined Alaska Aces in 2004, he was team captain for six years before announcing his retirement in 2010 after playing 15 seasons in the league.

From being a 10-time PBA All-Star, 2003 PBA All-Filipino Finals MVP and 2002 PBA All Filipino Best Player of the Conference, Cariaso began his transition to becoming a coach in 2011. 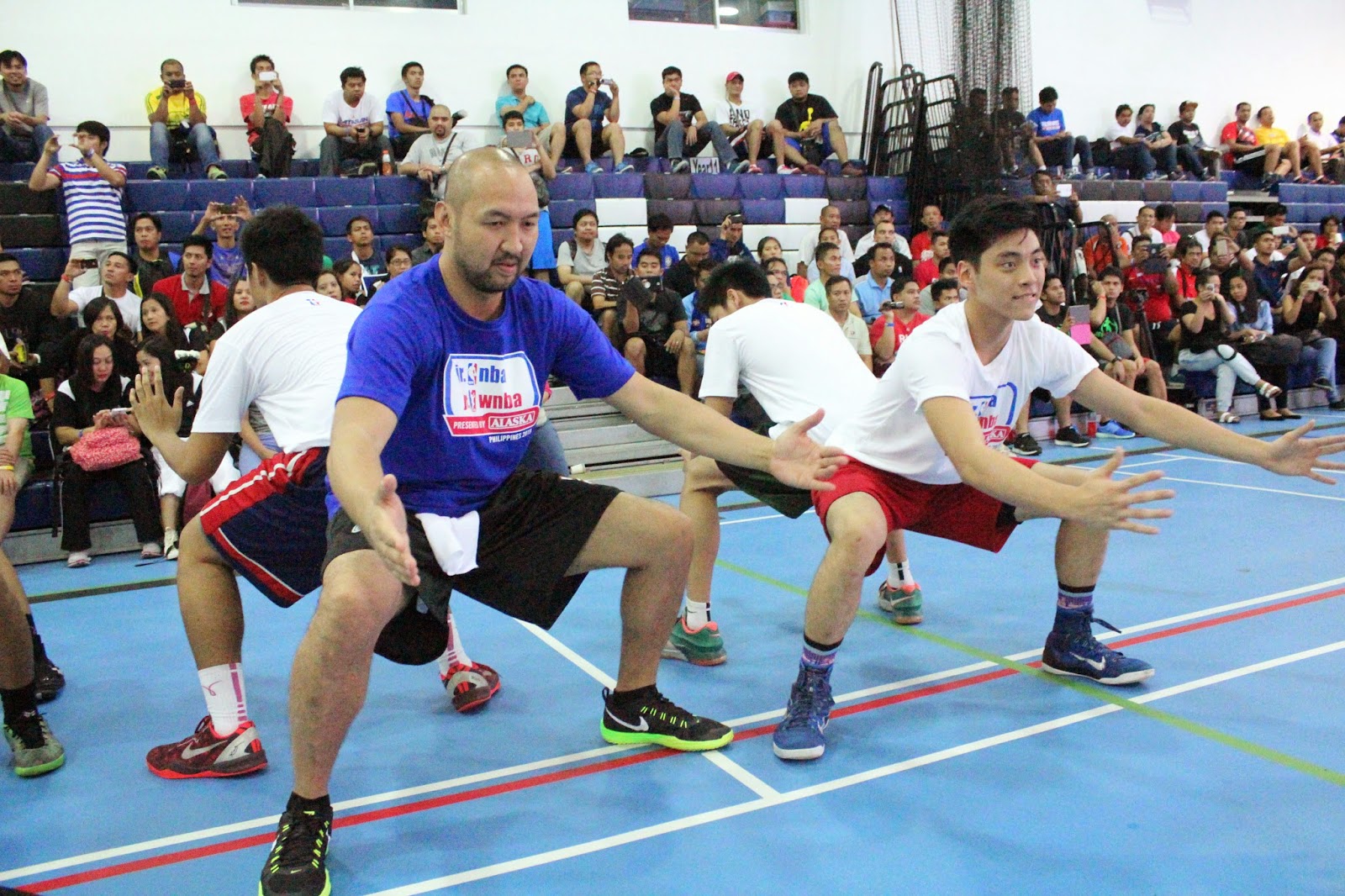 Cariaso returned home to Alaska this year to as Basketball Director for Alaska Basketball Powercamp and Jr. NBA and Jr. WNBA under Alaska's NUTRITION. ACTION. CHAMPION. Program to help aspiring young players achieve their full potential. He will travel around the country together with the other coaches to conduct school clinics for coaches and players during the regional selection camps. They will also teach not just the basics of the sport but also STAR values of Sportsmanship, Teamwork, (positive) Attitude, and Respect. These activities will culminate in the National Training Camp at the SM Mall of Asia where the 2015 Jr. NBA and Jr. WNBA all-star teams and national coaches are named.

The players and coaches will then have an experience of a lifetime when they go on a trip to watch an NBA game and meet NBA players. Last year, the Jr. NBA and Jr. WNBA teams flew to Beijing, China to meet basketball legend Yao Ming and played friendly basketball games with other all-stars teams from Southeast Asia.

Young boys and girls will learn positive values as they as they showcase their basketball skills with athletes of the same age (10 to 14) through the Jr. NBA and Jr. WNBA. Alaska promotes a healthy lifestyle, especially among children, through regular sports activities and proper nutrition.

According to the 7th National Nutrition Survey of the Food and Nutrition Research Institute and the Department of Health, obesity is increasing with nearly two out 10 children considered as overweight. Under-nutrition is also a public health concern.

With Alaska as presenting partner, the Jr. NBA and Jr. WNBA program has reached thousands of schools and communities nationwide and benefited thousands of young boys and girls, parents, and coaches through basketball training camps and school clinics.

The Jr. NBA/Jr. WNBA program for 2015 will definitely be exciting with Coach Jeff on board in helping our future athletes realize their dreams. Encourage your children to go out and play! 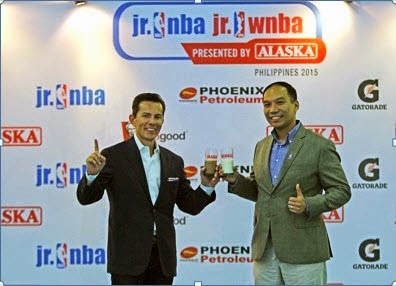