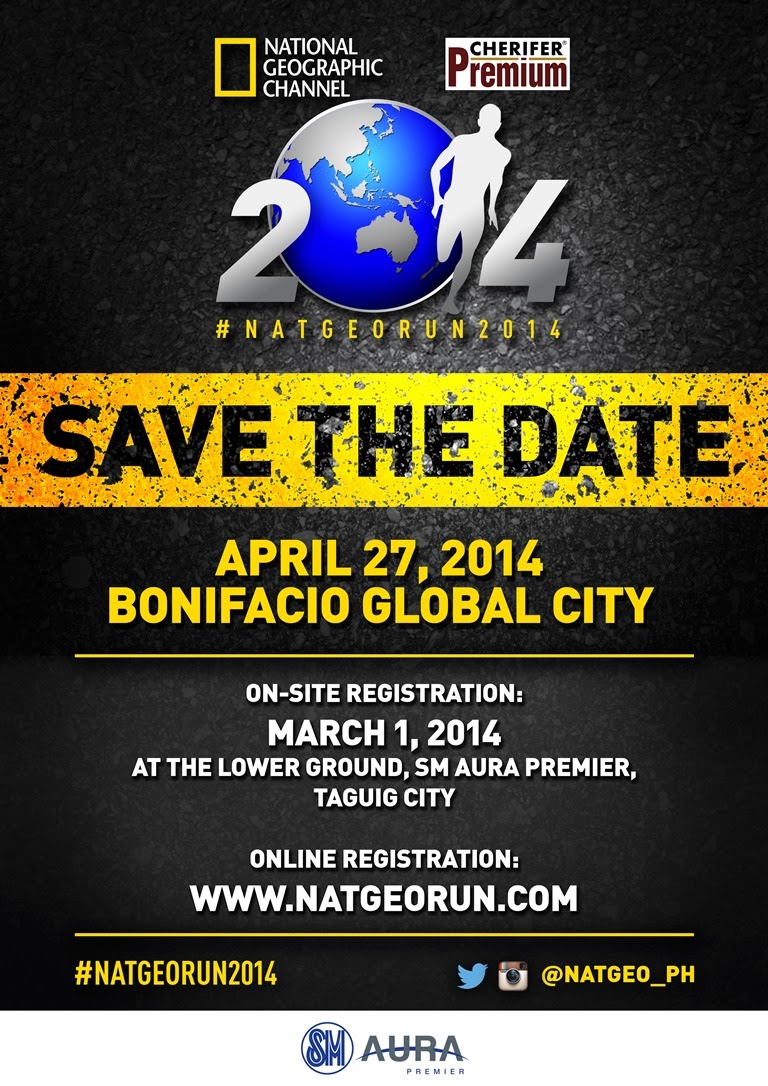 On April 27, 2014, National Geographic Channel (NGC) renews its commitment to the environment by celebrating this year’s Earth Day (which falls on April 22 globally) with another round of its wildly successful Earth Day Run. Now on its fifth year, Earth Day Run is expected to attract 12,000 running enthusiasts of all ages and fitness levels to participate for the good of the environment.

Earth Day Run has consistently been besting its record for number of participants, with last year’s expected number of 10,000 runners demolished by an actual registered 12,000 participants. NGC hopes to replicate that success for Earth Day Run 2014 by registering 12,000 runners in the 3K, 5K, 10K and 21K categories, including a new fifth category of 42K designed to draw the most physically fit and expert runners in the country. The event itself is considered one of the biggest runs in the Philippines.

This year, NGC is working once again with its environmental partner, World Wide Fund for Nature (WWF), to make a solid difference in the Philippines’ environmental footprint and give sustainable livelihood opportunities for local communities. Last year, the two organizations used proceeds of the Earth Day Run to plant P1 million worth of fruit-bearing trees in the Abuan watershed in Isabela, in the Sierra Madre region. Besides partial reforestation of this important resource, local farmers were given the privilege to own and care for the trees as well as harvest their fruits for their income. In 2014, NGC promises to raise money  for WWF’s Bancas For The Philippines project, which aims to train fishermen affected by Typhoon Haiyan (Yolanda) last November 2013 in the making and use of fiberglass boats for artisanal fishing. These boats are designed to withstand the onslaught of typhoons to ensure that the fishermen can continue with their livelihood in any event.

WWF’s experts will train fishermen on site and help them build the fiberglass boats while reducing the use of sawn timber and plywood, in the hopes that the communities can produce one boat per day. Many fishermen were left with no sources of income when their boats were destroyed by Haiyan, and so this project is a significant step toward the rehabilitation of communities in Palawan, which was ravaged by the typhoon last November but slow to receive relief due to the sheer number of islands in central Philippines that needed to recover from the devastation. Earth Day Run 2014 aims to help these fishermen directly with the sharing of climate-smart technology that will help them recover their livelihood, as well as decrease the fishing pressure on our seas that have been heavily exploited by commercial fishing by promoting artisanal fishing for small-scale fishermen.

Earth Day Run uses recyclable materials for its race bibs and a “Zero Paper” registration process in the form of a Centralized Registration System, which National Geographic pioneered in the country. Participants can support the Haiyan rehabilitation efforts of NGC and WWF by signing up on www.natgeorun.com or visiting the sign-up booth at the Lower Ground floor of SM Aura from March 1 to April 20. Finishers of the longer races of 21K and 42K can not only take pride in their physical victory and willingness to help Haiyan survivors and the environment, but they will also each be getting a medal and finisher’s shirt to commemorate their triumph.

Nearly four months after Typhoon Haiyan, those affected by it still need so much help, and it has become important to sustain the public’s interest in their rehabilitation. Earth Day Run 2014 invites all runners to register and do their part while enjoying the health benefits of good exercise and unity in supporting the survivors of one of the most devastating natural disasters in the country’s history.