Last year, 711 organized a fun run and was the first to execute a race on the Cavitex Route. This year, the race is back to celebrate the 1000th 711 branch. It was held last January 19 with the starting line at Aseana City, Paranaque. 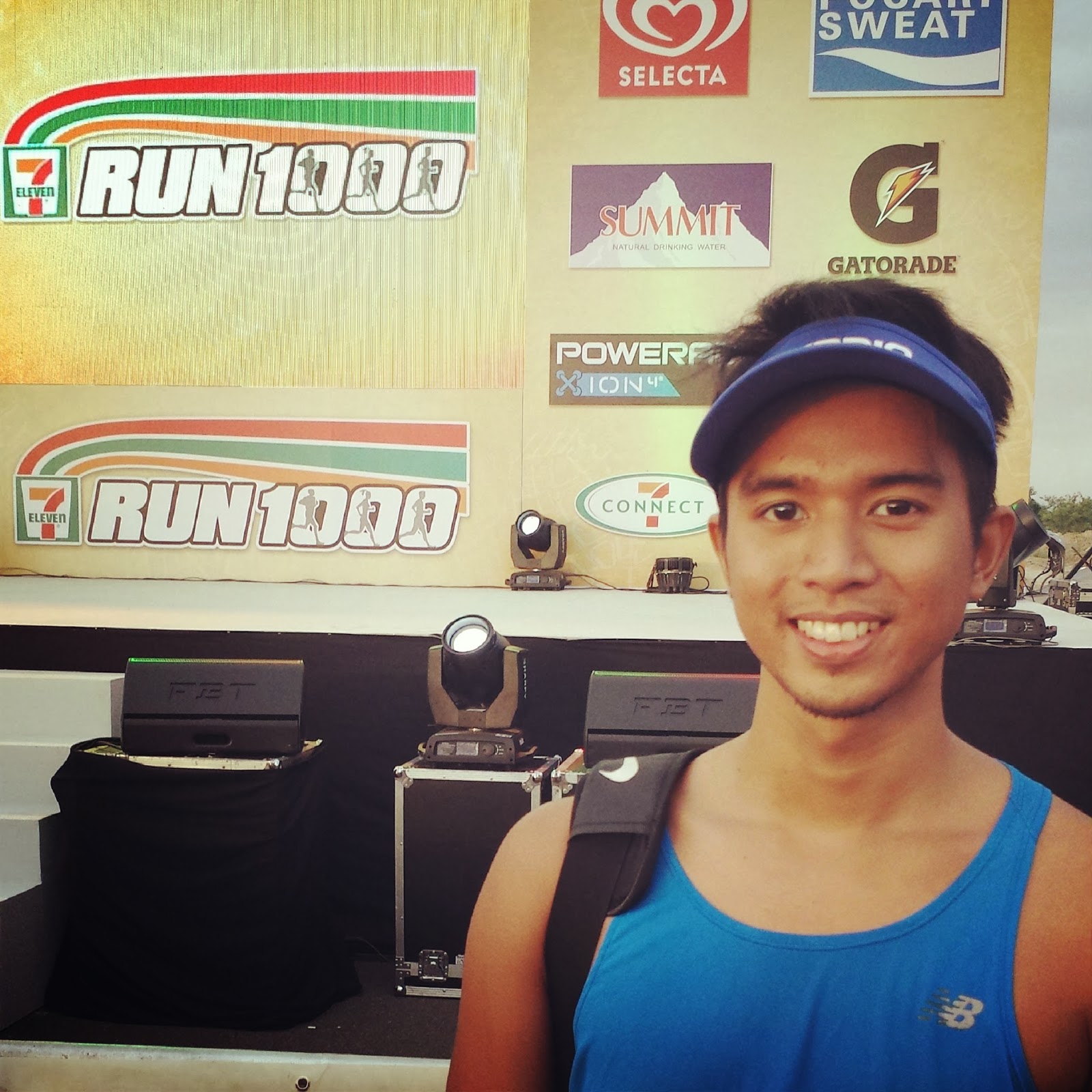 I am not training for any running event now but that doesn't mean I am not training. I attend crossfit classes, some GX classes in Fitness First and do regular swimming. So I guess I am still in good shape. I am still not motivated to long distance running. Though, I am happy with running as fast as I can.

The week before this race, I joined the Corregidor International Half Marathon - 10K Challenge and I really had fun not minding if I'll fail 12kms later as the distance was for sprinting so given the opportunity, I joined the 5km event.

It was a really cold morning. It wasn't a struggle waking up but it was a struggle whether I should join the event or sleep more. Good thing fellow #RunnerRusher (Rye) already tagged me in his facebook post so I was forced to go through it. And also, I asked some PRC (Pex Running Club) members to meet up for post run breakfast so not wanting to break a promise, I got ready and headed for Aseana City.

I arrived around assembly time which was ample time to check my bag in (which was a good 15 minute walk) and head to the starting line (another 10 min walk). I would only need to feel my garmin vibrate 3 times so instead of warming up on the first mile. I was moving in place as the rest of the 5,000 5k runners waited for running host Boy Ramos to signal us to begin the race. 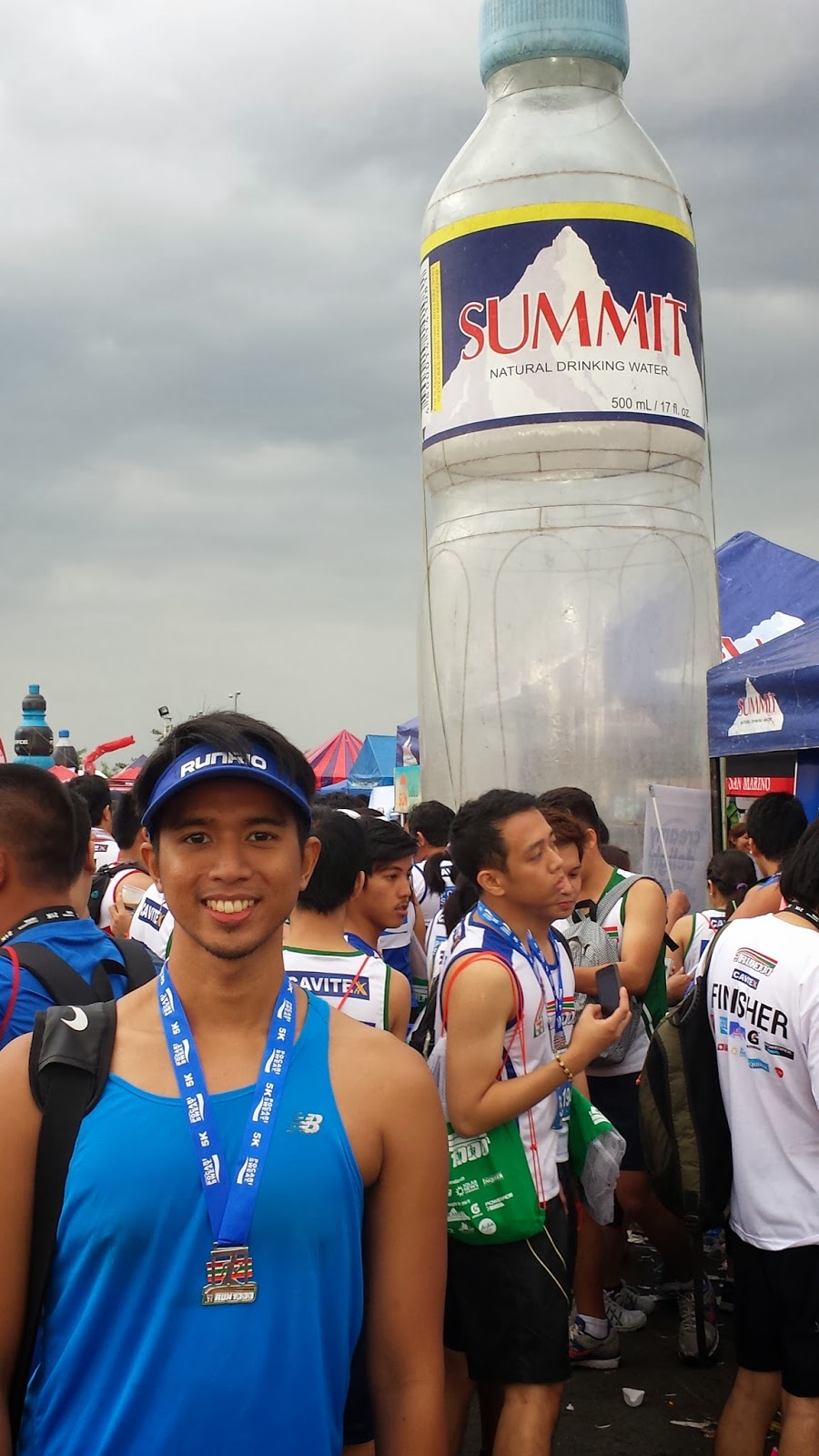 At the Summit booth

I tried to position myself in the middle of the pack and when the timer started, it turned out I was in the walking group. I had to find ways to get ahead of the walkers. It was 5,000 runners on a short distance category and I wasn't suprised they were walking but they hogged the whole road. Despite that, I still kept my pace. I didn't looked at my watch almost the whole race but I did look for key people to run ahead of. 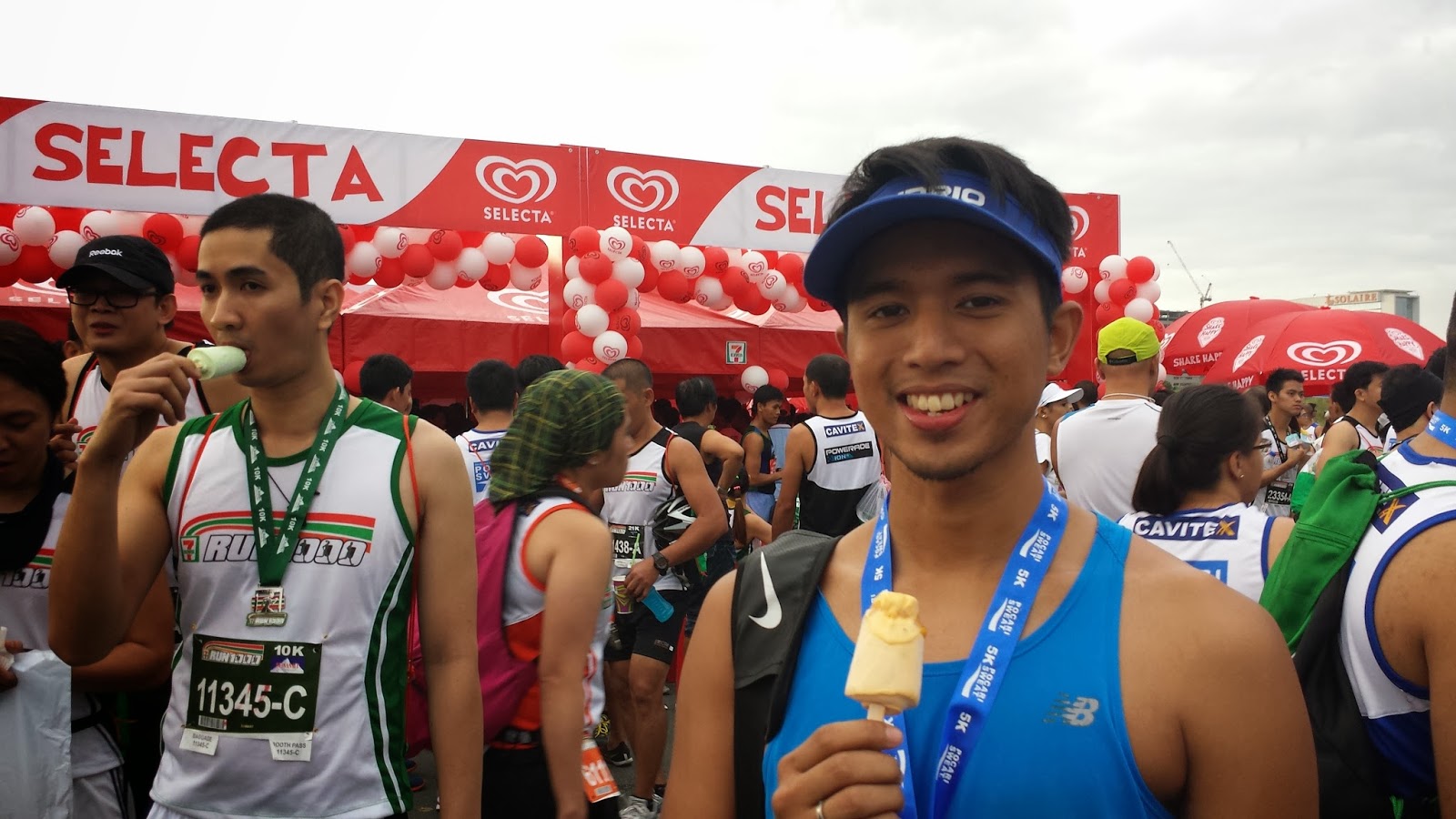 The route was mostly flat and we didn't reach the stinky part of Cavitex so I liked the route. At the last few meters towards the starting I passed one of my key people. Let's call him Kuya Chicken legs. I was traversing through the maze of people when I saw him passing me by so I race a little faster. I was trying to catch him when I almost bumped into a group of people and Kuya Chicken legs reached the finish line as I was figuring out a way to passed some people. I reached the finish line at 28:50. I was guessing it was a PR. But after checking out the results of my last 5km PR race, I was slower by 5 seconds. I am still waiting to check the official results if my reading was right. I was thinking if I was able to catch up with Kuya chicken legs it might have been a sure PR. Anyway, there's always another race.

Still breathing hard from sprinting, I walked a little to cool down and found a corner to stretch. Then, I made my way to the line for the finisher's kit when CJ spotted me. We then checked out the booths in the venue. It included freebies from Powerade, Pocari Sweat, Omega Painkiller, Trust Condoms, Coke, Mogu Mogu, Banana Yogurt Drink, Selecta, Summit, Nestea, Uniliver and a lot more. 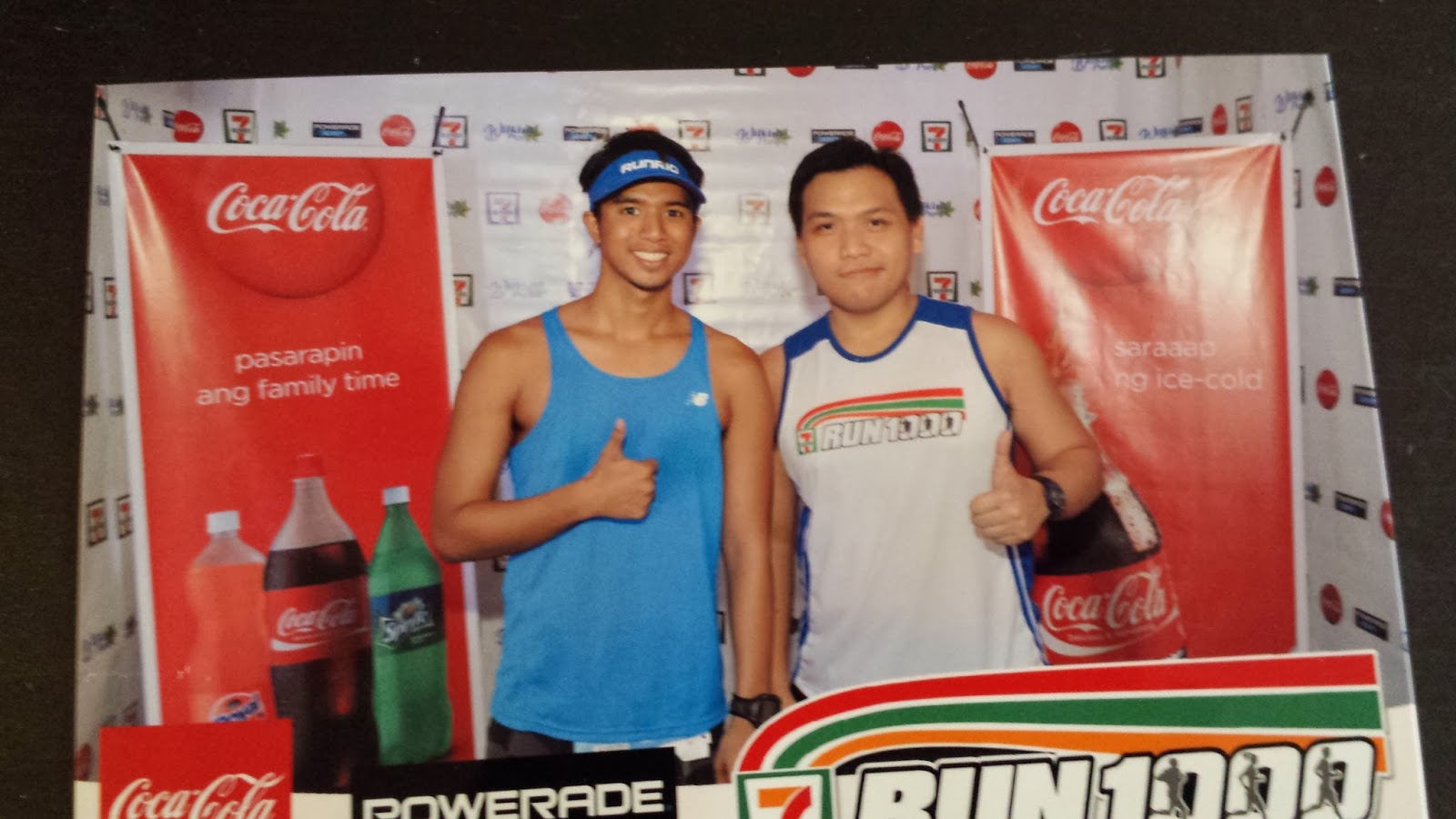 We have a photo booth printout!

After that, we met with the other PRC folks (Dom, Enrich, Calvin, Eva and JC) and went to MoA for breakfast. CJ and I were supposed to do a circuit workout but we both were too lazy to do so. (Note to self: Wag tatamarin! Kelangan bumawi.)

The 711 Race was a great event. There were more than enough hydration on the route. The markers were present to show which way is which. Marshals were visible. The Singlet and the Finisher's Kit was of good quality. 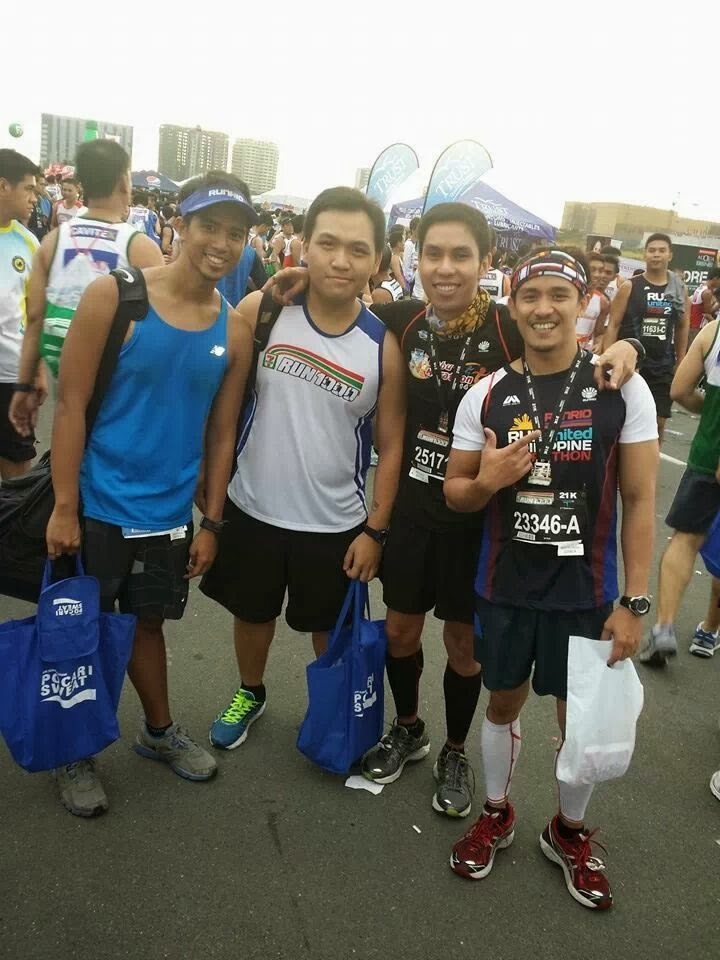 Me, CJ and 21k finishers, Noel and Rolly
(Photo from JP)

But the highlight of the race was the tons of giveaways and freebie booths from the sponsors. Since we finished 5km, CJ and I had a lot of time to enjoy these perks. Since there were lots of freebies, expect some people to horde the goodies (hi, *****!) so if you are up for the experience, line up and enjoy the post race area.

Baggage was fine. The people in my corral returned my bag safely without taking a lot of time. Overall, 711 race is shaping to be one of the best races of the year. 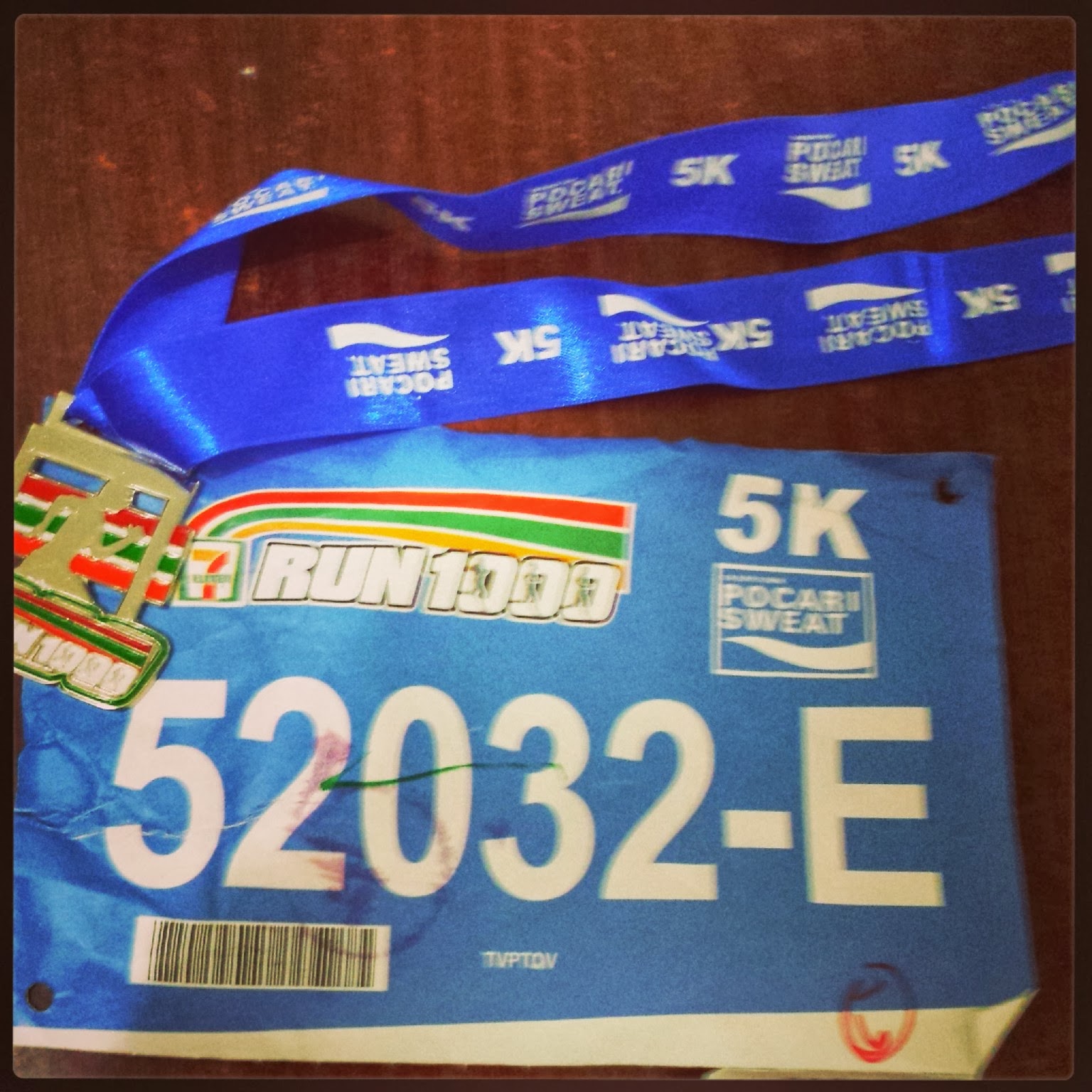