Men's Health Urbanathlon is one of the most awaited races of the year. It is the signature event of the Men's Health magazine. One of the races that carries the most exciting and challenging obstacles in an urban setting. This year, the 2013 event was held on September 29 at the SM Mall of Asia. 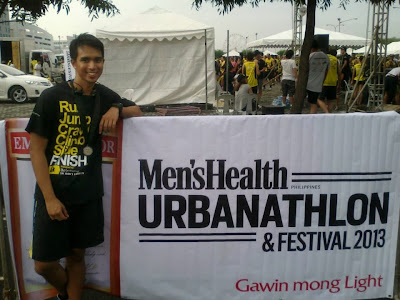 Last year, I missed this annual event since I was assigned onshore. I attempted to join the edition in New York but it was too challenging and it required a group to join so I passed and waited for this year's event. Unfortunately, this year was scheduled on the taper week before the RUPM so I opted for the shortest distance, 5km (which turned out to be a blessing in disguise).

Also, I have been pretty much lazy for the last 2 weeks. My only run was a 6 km maintenance run on the Friday before the race weekend.

On these days, the cold weather would make you choose to sleep longer and skip workouts. It was evident as the first texts/messages I got on the way to the venue was from Rolly and CJ saying they weren't able to wake up to their alarm clocks. I almost did the same but I was itching to do something active as I skipped runs in the last few weeks due to the weather. 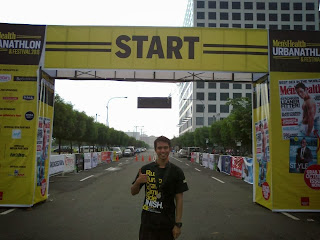 I arrived at the staring line at around 5:30 am only to find out that my wave had just started. Without any warm up, I started running. Excited to be running again, I was happy to run a steady pace. The first obstacle was the network. We were to climb a net up, over and down a truck like structure. Then, we went back to running to the next obstacle, the container van had us jumping and climbing over a muddy van. Climbing up wasn't easy. You had to jump to reach the next level. It was also in this obstacle that my shoes got muddy. :( 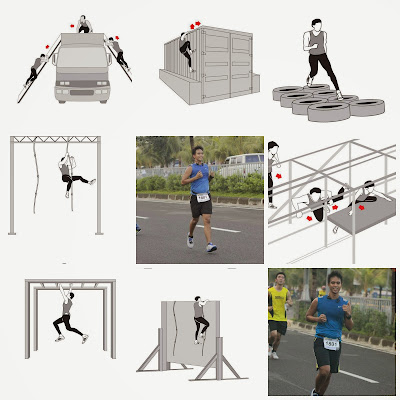 Then, I continued running to the tire obstacle. Last time, I attempted this kind of obstacle I almost fell flat to my face so I took this one tire at a time. Then, there was the tower. I was expecting that the tower wasn't part of the 5km route so I was surprised to find out that it was the next obstacle. The marshals was more lenient to us 5km running I only had to climb up one knot and it was fine. I still have mixed feelings over that 'coz part of me know I could go up all 4 knots at the same time I don't wanna. Then, it was a run towards the scaffolding maze where we had to go through a series of pipes. Then, the monkey bars where I slipped twice. But the marshals didn't had me repeat so yey!

The last mile had us conquering the runner's wall which was okay to get up but difficult to jump down. I think my brain bounced when I jumped down that 8 feet wall. The marshals was quick to assist so I was sure to be safe. Less than 5 kilometers later, I was done. My garmin says I did this year's race at 38 minutes. Then, I was off to get my finisher's stuff. But lo and behold, the last obstacle was a surprise one. The baggage counter which I will expound on later.

I met some of my friends from the PEx Running Club on the activity venue and we celebrated our finish with the booths at the event area. We had breakfast right after claiming our stuff.

I guess one big thing the Men's Health team should do is to perfect their plans before taking in more challenges or even try to get a team who could execute it so they could concentrate on some signature part of the event. The race route was short for all categories especially the 21km category who was short 3 kms. I think they incorporated too much loops and the clueless marshals in that area just failed to correct runners who were already confused. Most of the marshals was helpful especially in the obstacle area but I think they are too lenient for this event. I appreciate it but part of me thinks I could have done more if they were stricter. Hydration was also too little for the amount of participants who joined. 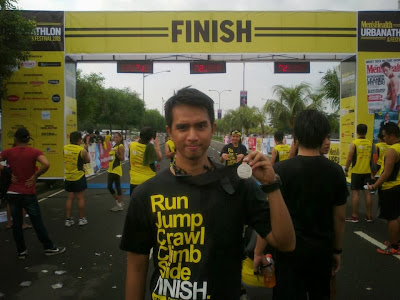 The baggage counter was a disaster. Most participants was complaining that it was the hardest obstacle of the race. The attendants just put the bag over each other without any organization so come the time the participants claimed their bags they didn't know which bag is whose. I was in the front of the line but they could find my bag so I decided to skip the line and wait until the crowd clears. When the people broke the barrier and were claiming their bags without the attendants help, we had to get our bags since they might be stolen. 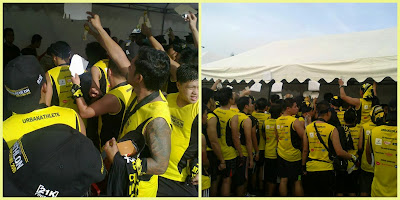 The obstacles was challenging and the queues are not that long due to the waves. Despite some of the problems in the way, I would still join the next edition at 5 km pa din!

Congrats to Men's Health and to all the finishers!

inggit! pero no regrets on not being able to join. kelangan unahin ang certification exam. bawi ako next year! :)