my 2nd Marathon at the Run United Philippine Marathon 2013

Run United Philippine Marathon 2013 is the third and last leg of the Run United Trilogy. It is the running events trilogy with the most number of participants. This conclusion leg had 12,000 runners of varying distances of 10km, 21km and 42km reaching the finish line (3,000 of which are marathon runners). On October 6, 2013 from the BGC area to the SM Mall of Asia, I made my goal (of finishing all 3 legs at the maximum distances - 21km, 32km and 42km) a reality. 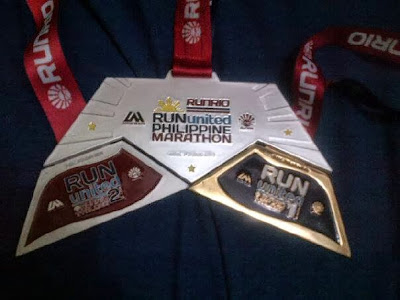 During my training for my first marathon at the Bull Runner Marathon that was held on February this year, I planned not to run any marathons anytime soon. The exhausting but empowering experience at my first marathon left me so-so on my original decision.

On March, I ran the first leg of the trilogy by running 21km at the SM Mall of Asia. I ran it at an easy pace. 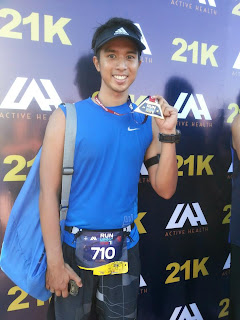 In addition, being able to attend the Runrio awards for the second time as a blogger had me feeling left out as one of the few bloggers who hasn't come up that Runrio stage yet. After much thought, I brought out the Galloway book I bought online and started planning for my next marathon with the goal of finishing the Run United Trilogy. 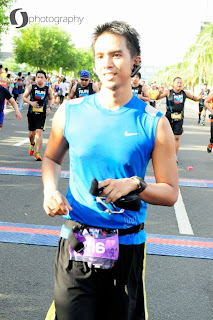 I started training on May with weekday maintenance run and weekend runs of varying distances. I incorporated the run walk method and the magic mile method in my training and small races. On June, I ran the second leg of the trilogy by running 32km. I tested my strategy for the marathon out with a successful outcome since I was able reach my target pace. I didn't train super strict and I allowed myself some time to do extra rest (especially after travelling) but I stuck with my training until 3 days before the race where all I had to do was consume carbs and rest.

A week before RUPM, my boss had me transferred to mid shift to support our clients in Europe. I'm a morning person so this was a challenge to me. I would already be in bed by the time my shift would end. Then, I dunno where I got it but before I left for my carbo loading dinner with friends, I was sick. By the time, I got home I had a fever and I was feeling cold despite the warm weather.

I blame work for the possible infection and for leaving me vulnerable to diseases by weakening my immune system by transferring me to a shift not in tune with my body clock. (Work talaga... Panira na ng social life! Panira pa ng active lifestyle) I can't blame my training or nutrition since I did taper and kept healthy (so work talaga ito!) 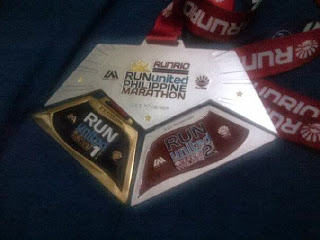 I was bed ridden on Saturday but I was determined to reach that finish line no matter what. I ingested my multivitamins and an additional capgel of Enervon Activ. I also thought of a positive outcome. Since I can't just throw away 5 months of training for nothing.  I changed my goal for a PR to just finish. It was the right decision. I'll expound on that later. I slept the whole morning and lied in my bed for the rest of the day. I slept until 1 am in the hopes of getting a little better.

It was also my first time to run sick. It was a bigger test of will power but I could do it. If I couldn't, I would have just surrendered to the medics. Luckily, it wasn't cold or rainy on that day or else I would have raised the white flag. 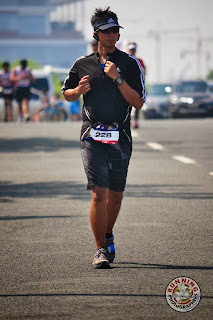 Running the 42km at RUPM

I prepared all the things I needed a night before so I won't leave anything behind. Good thing I wasn't nervous as I was during my first marathon. I accepted defeat on different aspects of my goal but I held with a little hope not letting my acquired weakness in the way. I put on a long sleeve shirt since I was cold but I still wore the singlet I had been planning and training in. I was aiming to take it off sometime during race. At the same time, I was wishing to keep my target pace and my target strategy of doing run walk for 15 miles and magic mile until I can't run that pace or the finish line.

At 1:30 am, I was in transit to BGC. The route map was too small for me to determine the exact location of the starting line so I decided to wing it and check out both Mercato and Honda starting lines. Unfortunately, my taxi driver wasn't as bright as I wanted him to be and I was too weak to be angry at him. An extra PhP 50 and 30 minutes later, I made it to the starting line. I left my baggage in the baggage bus and made my way to the starting line.


In no time, it was gun start and I, together with the 3,000 marathon runners, started running. On mile 1, I was already feeling headache so I slowed my pace. At the same time, I was being carried by everyone's enthusiasm at running the first few miles so I reprogrammed my garmin to do the run-walk strategy. In my training, I was supposed to speed up but I settle to doing a more conservative steady pace. I kept the pace from BGC to the Kalayaan bridge. From there, I remembered to walk the uphill and take advantage of the downhill. Then, it was steady run and walk again until Manila which was a pretty flat surface except for the 2 flyovers. Around the CCP area, we met the 21k runners and I pretty much ran with the same crowd. Mile 15 was around the Luneta area but I opted to keep doing run walk method and changed my strategy to start the magic mile method at 20th mile. We passed by the CCP area and made our way to Macapagal then a peek at the SM MOA finish line at mile 20. My magic mile turned to a steady pace jog but I settled with it. My knees were starting to hurt, too. 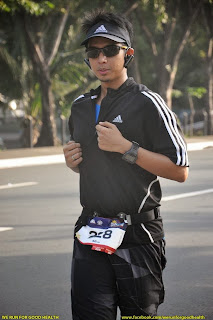 It was almost 5 hours at the 20th kilometer so I started getting enthusiastic of making a new PR. I kept the steady pace to Aseana City but I took more walk breaks and hit the 6 hour mark 2 kilometers away from the finish line so I gave up on the goal and just wanted to finish. By that time, I couldn't master the energy to keep running. I tried to follow people who were running but being at the end of the pack there were only a few people I could follow plus my legs were responding as much as I wanted. I wasn't even sure I wanted it anymore. 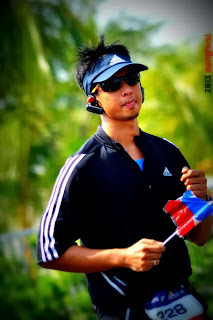 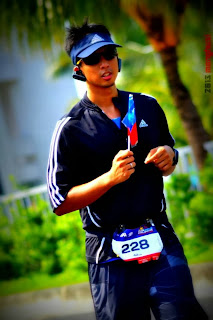 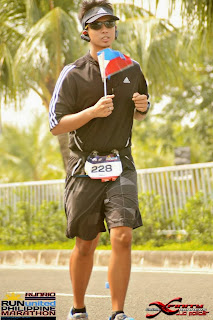 At the last turn, I could see the finish line. It was way over my target time but I still wanted it to be over as soon as possible. I ran and walk as fast as I can and I reached the finish line proud and happy. As expected, Run Rio marshals gave us the big and heavy medal and a surprise red carpet to a professional photographer finish with an announcement from Running Host (with matching blog promotion pa yan!). 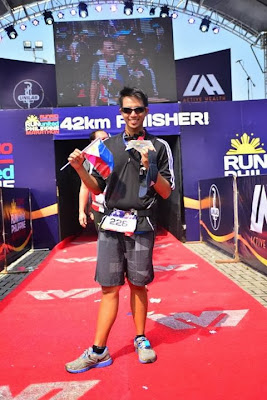 After my successful finish, I claimed my the rest of finisher's paraphernalia and my baggage and rested at a shade near the baggage area. I stretched a little and headed back to the activity area.

I was tired and still sick so I decided to skip the socials and the freebies. I hailed a cab home. Then, I opted to go straight to bed after a bountiful brunch and to sleep all morning.

Run United Trilogy is a signature Run Rio event with cold hydration and enough quantity at 2.5km intervals. Some people like the route but I don't like the Buendia area route as there are always uncontrollable car and vehicle traffic in that area. There were a lot of marshals to guide the runners, especially with the BGC and Manila area. The weather was also cooperative. One thing that was unexpected to all of us was there would be another event in the Aseana City which blocked the marathoner's route. Students were piling up the roads of Aseana so we had to steer clear of their kind. I even saw an elderly man being mocked by stupid kid. (Kiddo, try mo muna tumakbo ng 42km bago mo tawanan ang mga marathoners). It would have been better if marshals were present in that area so they could clear the crowds of whatever event that was.

Still, it was a great event that I would recommend runners to keep joining.

Congrats to all the Finishers! 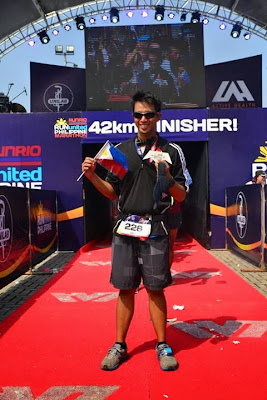