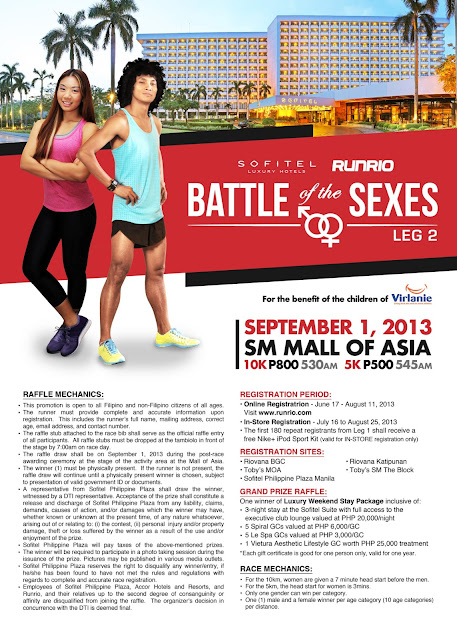 Manila, July 22, 2013 – Sofitel Philippine Plaza announces the launch of the Sofitel-Run Rio Battle of the Sexes Leg 2, a 5 k and 10k  Fun Run to be held on the 1st of September 2013 at the SM MOA Grounds, SM Mall of Asia.  Luxury prizes from Sofitel is at stake during the fun run including a three night stay at the Sofitel suite, access to Club Millésime, the hotel’s exclusive Club lounge, dining at Spiral, beauty treatments from Le Spa and Vietura, the new Aesthetic Lifestyle Institute.  The second run follows the success of its first leg which attracted more than 3,000 runners last March 2013.

RunRio is a series of 10k and 5 K fun runs organized by the Sofitel Philippine Plaza together with RunRio Inc. and headed by the foremost running coach in the country, Coach Rio de la Cruz. The Battle of the Sexes Fun Run’s unique concept of male vs. female is a first in the country with both 10 k and 5k race. Male and female participants will compete with each other in one finish line, one venue, and one distance. Female runners will start the race then the male runners will follow after  3 minutes (5k) and  7 minutes (10k run).

Sofitel Philippine Plaza general manager, Adam Laker says, “We were delighted with the success of our first ever run in collaboration with Coach Rio dela Cruz which attracted more than 3,000 runners.  Over PHP 755,000 have been raised and has been used to purchase a van that was recently handed over to the Virlanie Foundation for their activities for the street children of Manila.  It is Sofitel Philippine Plaza’s advocacy to create a brighter future for the less privileged children of Manila.  Since 2007, the hotel has launched several projects to help raise funds to support the foundation’s benevolent activities in order to reach out to the children and families living in the poorest areas of Metro Manila. 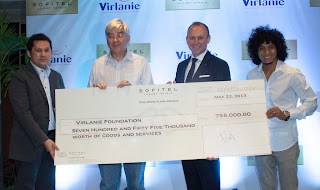 Battle of the Sexes Leg 1 raised P750,000++ for
the children of Virlanie Foundation

Tickets are on sale at Php 500 for the 5K and Php 800 for the 10K, inclusive of the run registration and running kit. Registration sites are at Riovanna BGC and Katipunan and Toby’s Mall of Asia and SM the Block.

For more information on the Run Rio Fun Run, visit www.runrio.com or contact and email 0929 7178164 and runrio.racereg@gmail.com.
Posted by Thirdy Lopez at 8:13 AM