Do you want to run faster, stronger, longer? If you’re a runner looking for ways to enhance your efficiency, speed and overall performance, try looking into your running technique and re-think your shoe choice.

Skechers has gone the extra mile by helping runners transition to more efficient mid-foot strike running rather than heel striking through its GOrun series. Skechers GOrun running shoes features the M-Strike Technology. Inspired by barefoot running, the principles of minimalism encourages runners to run more naturally by positioning the body for an efficient mid-foot strike in order to run faster, stronger, and longer.

Deemed to be the next generation of serious minimal running shoes, GOrun2 boasts of its GOimpulse sensors which are found underneath the soles. These make the wearer more responsive in running in any surface type. The shoe is made of breathable four-way stretch mesh toe panels and custom fit insole for comfort. The added Resalyte midsole absorbs the impact to prevent injuries. 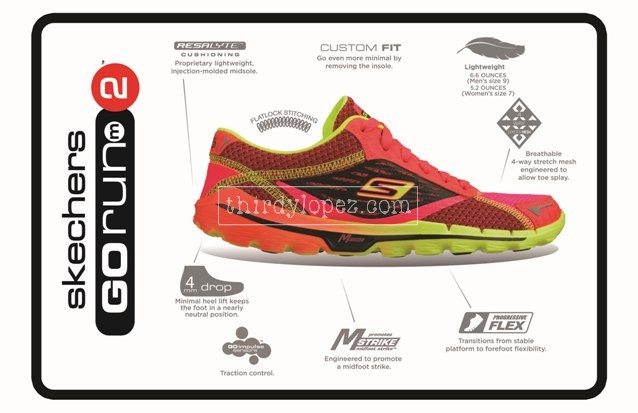 Skechers GOrun2 features a minimal heel lift at 4mm to keep the foot in a nearly neutral position. The best part is its weight. GOrun2 is as lightweight as can be, allowing the wearer to run faster and more efficiently. Moreover, it comes in striking color combinations.


Accolades from the Elites

“Skechers’ new performance shoes change the way I run for the better,” said the number one marathon runner in the . “I’ve been a heel runner my entire life, but I am now wearing Skechers to maximize the efficiency of my foot strike. My shoes are my most essential piece of equipment and right now, Skechers has the footwear I need to succeed,” added Keflezighi.

Filipino top age grouper tri-athlete Martin Lorenzo believes that it is crucial to look for the right lightweight shoe that promotes a mid-foot strike to avoid or lessen injuries and improve on speed and efficiency. He recounted his search for the perfect pair of running shoes to accompany him in his races. The tedious task ended when he found Skechers GOrun 2.

“I bought myself different pairs of shoes and tested each one. What came on top is the Skechers GOrun 2. It is well-designed, lightweight, very comfortable, and well-ventilated for our tropical climate. It exceeded my expectations on every count,” shared Lorenzo, a consistent podium finisher in his age category and a passionate athlete who races in local and international triathlons and marathons.