Rebisco @ 50: The Gold Rush Run is a race organized by Xavier School Batch 88 and Rebisco, who was celebrating 50 years. The event was held last April 7th at BGC.

I only have few races to join this year and this run was not in my list. But when I saw my friend Dok Mark posted something about his 5k run in the treadmill  I urged him to join in fun runs. As my willing victim, I asked him to pick a race that I will accompany him in and he picked this race. It was funny to see Mark stress about his first 5k run as running 5k had become a every other day running distance for me. But we all went through that. I stressed about my first 5k run too but I finished it and I've been running ever since. 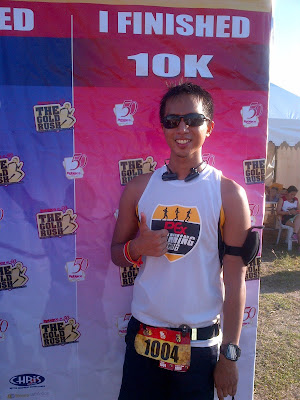 I asked Mark if he wants me to pace with him and he said it will be fine to just meet in the finish line so I joined the 10k race instead.

On race day, I was in one of my "dragging myself to a workout" days so I wasn't really pumped up to run. But it was still miles to run and my friend was waiting there for me so I just went to the BGC anyway. (Di katulad ni shutup na di na bumangon, LOL) I rode a taxi and made my way to the usual race start, 7th avenue near Honda. To my surprise, there was no starting line and it turns out the race assembly was near Mercato. My bad for not reviewing the route map. Almost late, I arrived at the starting line and met my friend Mark. Look who he brought along! May kasama po siyang date kaya naman pala ayaw magpa-pace. 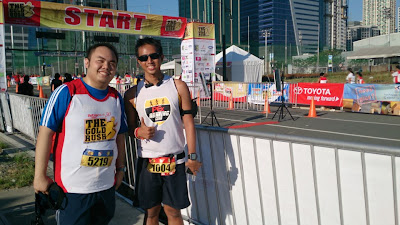 Anyway, he was running 5k so I made my way to the starting line as 10k runners start first. I wasn't really gunning for a PR so I placed myself in the middle of the pack and planned to maintain a 10 minute/mile pace. At gunstart, a celebrity was going to run 3k and another celebrity was just there to cheer for the runners. Sorry, I forgot their names since I don't watch much TV so I can't identify these girls.

I started my first mile at less than 10 minutes/mile and slowed down towards the finish line. The route was just going around BGC. Since one of the race organizers was Leadpack, I found familiar faces volunteering to marshall. I found friends from running divas, team HOB, Ayala Triads and running bloggers Rod and Jet.
In the way, we needed to pass by a fire truck showering the runners with water. I wanted to get my self wet then I remembered I brought my phone so I had to back track and got myself just a little wet. Luckily, my phone didn't die as it was still dry.

I pushed myself to the finish line and clocked at 1:04:40 based on my Garmin. Not a PR but a good run nonetheless.

As I later found out, Mark and his date finished at around 48 mins. I think I was at the race assembly venue before they got to the finish line. We waited on each other to get our finishers' kit and had our picture taken. I forced Mark to have his pictures taken as this is his first official run event. Mark had a great time running and he'll be running 5k again on May and was even asking about joining the Pex Running Club (at first I thought he was kidding but hours later I found a request in our FB group so welcome Mark!) 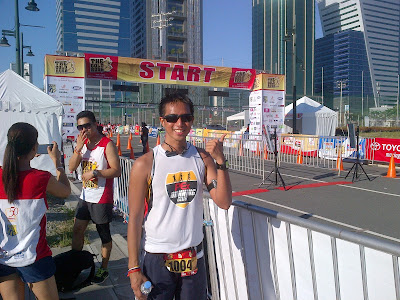 We had breakfast at a nearby fast food and then, I was left to wander where the nearest BGC Bus Stop. (Third wheel blues)

There were a lot of runners who participated in the event. They weren't the usual running crowd but it's nice to see people trying to join these events. Hydration was okay. I bought a hydration belt so I wouldn't take too much time on the hydration but I was able to find an energy drink when my body started looking for sugar.

The loot bag was plentiful. Since I am not a junk food lover, some of them are still stored in my kitchen cabinet. I loved the big and sinful bar of choco mucho. I wasn't able to make use of the sports band giveaway but I saw running diva Ricki and it looks great. It should also be useful in providing an ID in case something happened to a runner.

I also loved how the bib looks like gold in connection to the Gold Rush theme.

Overall, a simple and fun race. It's a successful enough event to celebrate Rebisco's 50 years.