National Geographic Earth Day Run 2013 is an annual run organized to support a earth-friendly non-profit. This year, the event supported WWF and promised each runner 3 trees to be planted for each registered runner. Held last April 28, 2013 at the BGC, the event catered to 12,000 registered participants which meant 36,000 trees will be planted as a result of this event. 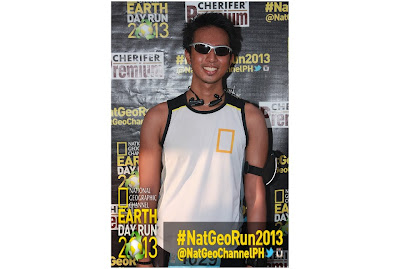 I registered at the Greenbelt Registration Center. I opted to run 10k so I wouldn't be too tired. Registration wasn't smooth, not just for me but for a lot of other runners. And during the registration, the organizers gave us a free water bottle aiming that the race will be trash-free. 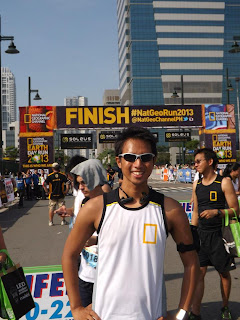 I wasn't running as diligently as I should so I wasn't really aiming to achieve a PR. Also, the participants targeted to 10,000 was extended to 12,000 so I was expecting a lot "traffic".

I came to the venue a few minutes before gun start. I was expecting to be late since the organizers were supposed to make security tighter with the Boston Marathon incident freaking out Pinoy runners. Fortunately, depositing my baggage was smooth and easy. I was running on my own as most of my friends were running 21k or shorter distances. I was expecting hydration to be paper cup-free but it wasn't. I guess with a large number of participants they wanted to prevent dehydration especially to the newbie runners who were too stubborn to bring their own water bottles. 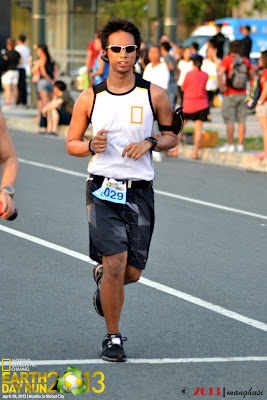 Gun start was on point and in the middle of pack, I ran almost 10k at 11 minutes per mile. On the way, I found dragon boat paddler Marky and paced with swim buddy Christian until the last few kilometers. The route roamed around BGC going to Kalayaan Flyover and a quick turn around in Buendia. Hills really slowed me down. This is an obstacle I need to train in.

Anyway, my garmin said I finished 1:05 with the distance a little less than 10k.

The post-race assembly area was festive and being a short distance runner this time. The space was still free to roam around. I found MJ in one of the photo booths and I got to have my picture taken. This is rare in big races unless you are willing to wait 1-2 hours to do so. 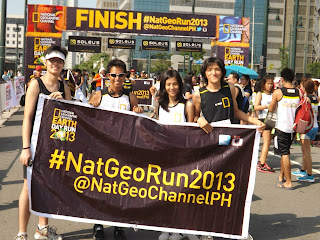 I had to wait out for hours as I realized that I should have claimed my baggage when only a small percentage of the runners had finished and I was also waiting for the other PRC peeps to arrive. I wasted time in an umbrella near the photo booth until there were less people in the baggage claiming area. Then, we finished the race off with token pictures at the finish line and breakfast at Market! Market!.

I wasn't really expecting a lot from this race since some of the people from the running community has decided to pre-judge this event based from last year's performance. Despite that, newbie runners still supported the event. Exceeding the target by 2,000 runners, the organizers now have the responsibility to plant 36,000 trees. That's a really great thing! Newbies get to experience running events while helping out the environment in the process. 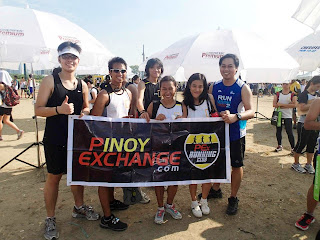 Registration wasn't flawless. Staff had imposed a cut-off at 8pm but they closed registration before that time. They are also misinformed of the procedures and doesn't have the initiative to ask their leads on the correct protocols. Greenbelt was near my office so it wasn't a problem going back and forth but this wasn't the case for some registrants.

Security was great with bomb sniffing dogs everywhere. Our safety was regarded, especially with some runners freaking out because of the Boston Marathon bombing. Baggage staff were unorganized and disrespectful to runners. I got my bag after more than an hour of waiting for the crowd to clear by that time. 10k runners were to claim their own bag in a pile of bags with bouncer waiting to verify your claim. 21k runners have a different problem, though, you could either wait for assistance to find your bag or claim your bag youself but the bouncer will tear your bib in half. I found that disrespectful. Our running bibs are a souvenir of our journey to the finish line. 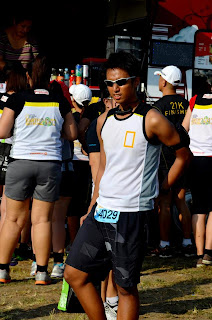 The assembly area was great but you couldn't really enjoy it when 12,000 runners are there. Numerous people were getting lost. But the organizers assisted by having them all meet by the stage area. Hydration was okay but the aim to be a trash free event wasn't successful as they still provided paper cups but most runners had brought their hydration bottles which still lessened the trash.

It was a good race but it still has a lot to improve. Kudos to marketing for bringing more people into running!  Our new PRC member had ran her first race here and I even heard my office mate's sister in law ran her first run event (despite deciding to finish at McDo) .

Back once again and hope to be able to do tis consistently....glad you are still running and blogging....