By the start of the year, I made a list of things that I wanna learn before the year end and one of those goals is to learn Total Immersion Swimming.

I first heard of this swimming technique from Coach Ria Mackay in a talk organized by Multi Sport Philippines. She described the discipline as swimming with fewer strokes and less kick. Swimming is tiring and just doing traditional swimming can be energy draining so I decided to swim more efficiently by learning  to do this technique.

I choose Ria McKay's school for Total Immersion known as Aqualogic Swim School. They have lessons in Makati Shangrila which is a 15 minute walk from my office. It wasn't cheap. A month's instruction costs P7,800++ plus the P500 registration. But like any swim schools they weren't strict on the schedule so I could skip a few classes when I needed to be elsewhere.

My first session was with Coach Mark and I immediately understood why it is more efficient swimming technique. It uses rhythm to make you swim with less effort. On the weekend after my first session, I was able to do 1.5km and I wasn't as tired as I usually would be. I even wanted to make it 2km but the sun was shining too brightly so I just left it as it is.

The succeeding sessions were spent with Coach Izel and she taught with more precision and more attention to the detail for the technique. We start of with drills for the body balance then the strokes then strokes with breathing and then we'll add kicking until I get the technique in how to swim using the total immersion. It was difficult to unlearn things that I always do with traditional swimming like ending strokes in the middle instead of away from the shoulder. As coach would say "Sakit" ko na yan but I could unlearn that with the right practice. As I learned techniques in breathing, I also had to stay extra attentive with the position of my hand during breathing. Lastly, it took me a while to get the 2-beat kick but after numerous tries, I finally got it. I still have a lot to improve on, though. 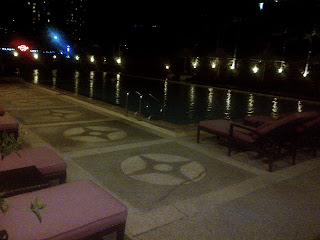 
I finished all 8 sessions but I haven't gotten the right technique yet but I'll get there in time (with practice, of course) for a swim event I'm eyeing on September and November. Learning Total Immersion is worth the price I am less tired after my swim session but my body is still getting used to the technique. Maybe, I'll get faster when I am able to practice the technique in the correct way it should be executed. I'll get there. At least, I understand the concept but my body is not yet used to the movement. As of now, I'm happy with this new knowledge.
Posted by Thirdy Lopez at 5:30 AM

Cool but pricey...haha... I am thinking of enrolling in a swimming lesson for beginners. I do swim but not the proper way and just a few meters and I am tired. lol... I just sent a PM in their website, hope to hear from them soon. Also hoping for a good deal. Lol...

Erraticlakwatsero: it is better to call the number in the website but they do reply to emails.

I suggest you take traditional classes first since it is expensive and I think you could maximize the lessons if you are just learning the technique instead of learning to swim.