On its fourth year, Sky Cable had once again organized the Boracay Skyathon Run 2013 to help save the beach of Boracay. I, together with my PEx Running Club friends, returned to the number 1 beach in Asia and joined this event held last April 13. 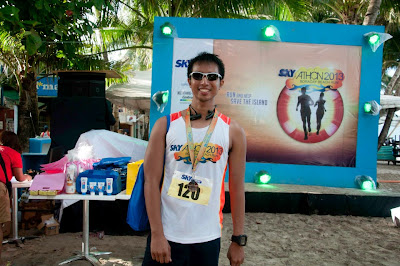 Disclaimer: I don't recommend doing the same thing but the experience was indeed fun.

2012 pa lang! We were already booked flights to Boracay with seat sales from Cebu Pacific and Zest Air. This year, the gang was even bigger with the addition of CJ, Eunice, Dandan, Lee, Rodel and Karl. We were fortunate enough to land to Caticlan with just a few minutes delay. Some of my companions had their flights cancelled and rebooked to Kalibo with hours and hours of delay. 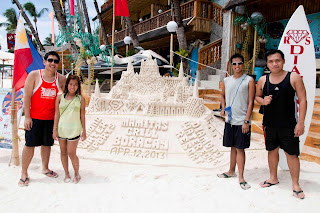 Roaming around the Island with the Boracay newbies

We planned to just roam the White Beach that day so Boracay virgins Karl, Eunice, CJ and Lee could roam around. We walked around. We swam. We had Jonah's fruit shake. Bakayonista mode talaga. 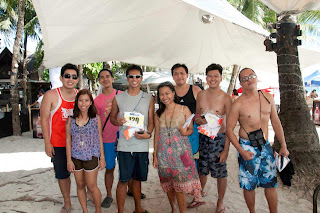 We got our race kits!

At around 1pm, we claimed our race kits and had the others registered for the race. This year's registration was effective with Takbo.ph as the 5k slots were already sold out and the singlet sizes were only small and extra small. A dismay to CJ, Gerard and Dom. (lalalalala) Later in the day, CJ and I visited Noel's first-class hotel and watched Survivor. 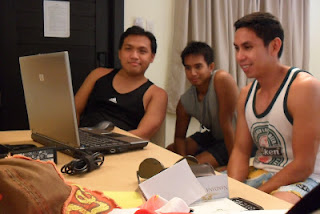 At night, we attended the pre-race party which was unusual for a race to have alcohol before a running event. But as Noel said, "Di ka naman mag-popodium" so bakit kelangan in tiptop shape? (Tapos biglang si Noel pala maaga natulog...) Cath, Dandan, Kay, Gerard, Karl and Eunice joined a newspaper dance like drinking game. Everyone lost their balance at the same time so the host Ramon Bautista made everyone dance to victory. The uncle dance and gorilla dance was born (Thanks, Karl! Readers, ibang kwento na to basta abangan niyo na lang ang launch  ng dance craze na to.). Kay and Gerard won and we came home with 10 bottles of Emperador Deluxe. 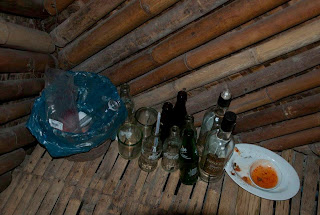 Those who were staying at Friendz had drank a few bottles of alcohol after the pre-race event. It was a fun night. We retired at around 2am when our den mother, Yuri, demanded everyone to sleep.

Still sleepy and with a looming hangover (again, wag pong gayahin), we made our way to the gun start where we saw Noel, Ryan, Jinoe and Queenie. We were chatting near the starting line when rain started to pour. It would have been a pain to run in wet sand. Good thing, the rain stopped just before the gun start. 5k, 10k and 1st of the relay runners started running at the same time. I wasn't feeling well in the first mile (my garmin is set to miles) yet I pushed myself to keep running a race pace. Then, I started feeling a headache from last night's alcohol intake. At the 2nd mile, I saw a runner put on his shades so I did the same. I kept running at race pace but I was on the look out for hydration (parang nasusuka na kasi ako). Since it was rained a few minutes before I opted to get the bottled energy drink. 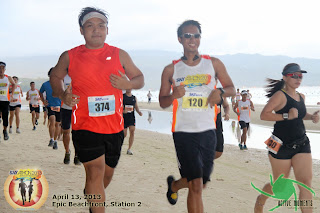 On my way to Station 2, I saw celebrities walking to Station 1 u turn point. AHA, I'm ahead of some of them so kept my race pace. I was still feeling my headache so I concentrated on passing or pacing with some runners. On the way to the Station 3, I opted to pace with a few runners. (Di ko naman kilala basta sinabayan ko sila.) Running at station 3 was the most challenging of the route as you have to course through heavy sad. I remembered last year I had to take my shoes off because of the sand. I didn't do that this year as I opted to stay close to the waters since the surface there is easier to run on. At the last mile and approaching the finish line, I took the last drops of my energy drink and stopped to look for a trash can. At that time, Bodie Cruz (apparently celebrity siya... Sorry di nanunuod ng TV!) had passed me. It was my cue to run to the finish line. I wasn't expecting a fast run as I approached the arc. I was shocked to see the time was 30 mins. I ended up with a 31:07 finish. 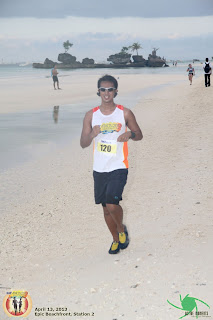 So Boracay! With Willy's Rock at the background

Catching my breath, I claimed my finisher's kit. This year, the process of getting the medals were chaotic. They arranged the medals based on numbers but the labels had our names instead. In panic, the staff had disorganized the medals and it took a while for me to get mine. Ryan was given the wrong medal but it was sorted out minutes later. 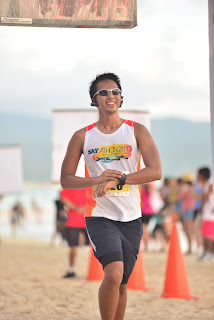 At the post race event, Karl, Eunice, Cath, Lee and Rodel joined a game and my team won. YEY! The prize was a massage from Palassa Spa which I regretted having since my muscles ached the week after. A great run, overall. 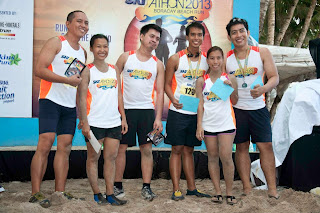 By the way, Kay won the 5k 3rd place for women. Congratulations! We're proud of you!

After the race, we enjoyed the views, the activities, the partying and the experience that Boracay had to offer. Let's not get too much into detail as "What happens in Boracay stays in Boracay". 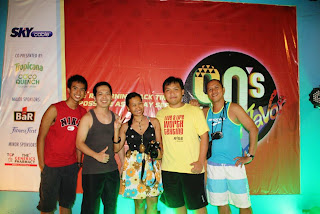 If I compare this year's race to last year's then a lot has improved, the registered participants has grown from less than 200 to almost 400 runners. The singlet size has the same quality but has a smaller size. The choice of size has been limited, though. I got a dirty singlet and I wasn't able to exchange it to a cleaner one due to the limitation of stocks. The pre-race party was in the evening. This follows the Boracay's party feel. 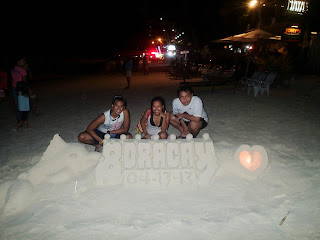 Gelli Victor is still a great host for the race and post-race activities. Sponsor's area is bigger this year. Race claiming is of the same formula so it's still organized. As I mentioned, claiming of finisher's items was a pain. Last year, they did it better. 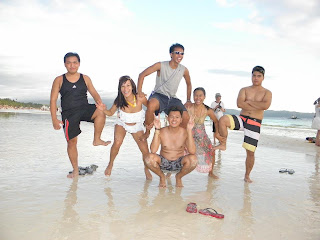 Fun at the White Beach

Last year's venue for the post-race party was more "exclusive". This year, we skipped most of the celebration with the number of people who didn't even ran in the race attended.

A race while nursing a hangover - kaw lang ata may kaya nyan Thirdy! :)

Ayos 'to! :D Beach outing and run in one! Btw, congratulations to your team! :)