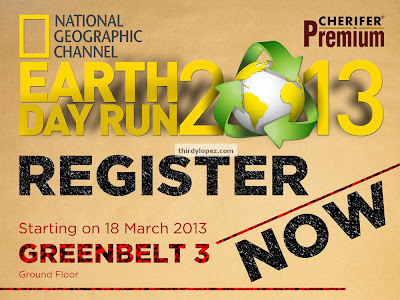 In anticipation of one of the Philippines’ biggest annual running events, National Geographic Channel is cooperating with local law enforcement and local government to beef up security for Earth Day Run 2013 on April 28, 2013 at Bonifacio Global City. The channel has broken Earth Day Run’s previous record of 10,000 participants and is working hard to ensure the safety of the 12,000 runners registered this year.

In order to assure participants a safe and pleasurable running experience, National Geographic Channel is taking the necessary steps to address safety concerns and secure the race route. Hundreds of members of the police force and K9 units will be deployed at the venue, and National Geographic Channel is employing dozens of additional race marshalls along with increasing its medical staff and ambulances on call. They are also putting up more barricades and more water stations to protect the runners and help them stay in top condition during the course of the race.

“Let’s not put our guards down. Let’s be vigilant in protecting our runners. We must let all our runners cross the finish line safely,” said Police Chief Superintendent and District Director Gen. Jose Erwin T. Villacorte from the Southern Police District.

The Nat Geo Earth Day Run is consistently one of the biggest running events in the Philippines, beginning in 2010 with 6,000 runners and gaining the participation of 10,000 runners in each of the last two years. This year, 10,000 more runners, young and old, are expected to participate in the Earth Day Run to show their support for the rehabilitation of the environment and a greener future.

Now on its fourth year, Earth Day Run is giving participants the chance to green the planet by promising to plant three trees in each registered runner’s name.
Posted by Thirdy Lopez at 5:05 PM