My First Official Trail Run at the Salomon Xtrail Run 2013

The Salomon Xtrail Run 2013 is an annual run organized by the top brand for trail running parapernalia, Salomon Philippines. This year, they promised to be the most technical trail run of the season. On March 23 at the Hamilo Coast, Pico de Loro, Nasugbu, Batangas, I joined this event as my first official trail running event. 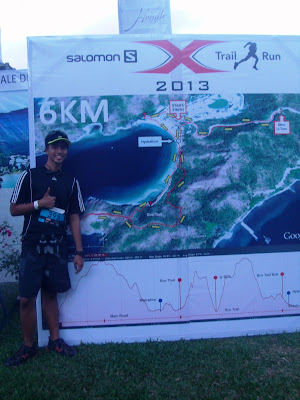 I shunned trail runs because of the possibility of getting myself and my shoes dirty. (Ewww, putik) But last year, I had no choice but to run in the trails of Wilmington, Delaware. So I grown an appreciation for trail running and I even bought myself trail running shoes. The longest I ran on those running trails was 10k. It was difficult and my body was aching all over the following day but the trail made me stronger. I wouldn't leave road races but I opened myself up to joining trail runs. (Ibang usapan yung mud/putik run, magsolo na kayo duon. Cheerer na lang ako!) 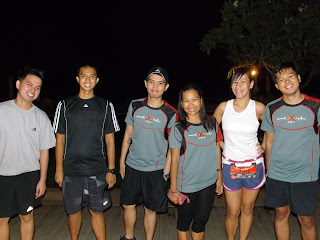 When my friends invited me to join the Salomon XTrail Run, I was easily swayed to registering since I'll be running with them and that should be fun. We even registered together para sunod sunod ang number sa race bib. 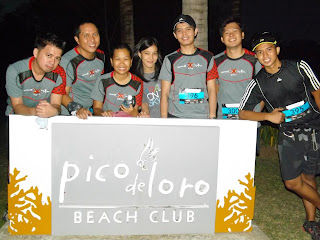 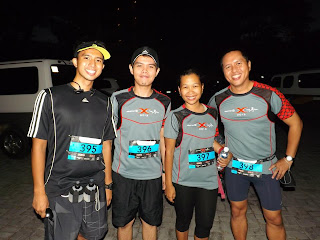 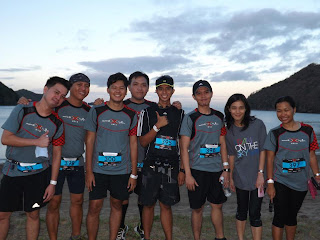 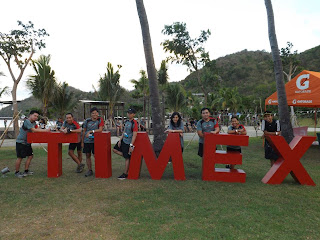 Unfortunately, pre-registration lang pala ang onsite registration so no race kit when we registered. A few days before the race, we saw ads in Salomon's FB page and we claimed our race kits in ROX at sunod sunod naman ang number sa race bibs. (YEY!)

The race venue was a 3 hour drive from Manila and with a gun start at 5am, we left Manila at around 1am. We rented a van good for 10 people and headed to Batangas armed with an Iphone 5 GPS app. I was seated on a seat not suitable for a nap so I chatted with Lee and KC the whole trip. This was my first official trail run and the first running event with very little sleep (nakatulog ako ng 1 hour before heading to our departure point). Since Bata was running 24km, we arrived there before the 5am gun start. We used the time to take some pictures and have a pre-run snack (Buko Pie na prinamis ni MJ 1 year ago). At 5:30am, it was Kay's turn to her 12km gun start. We then took more pictures at the beach since the sun was already up at that time. 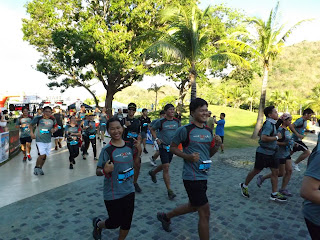 At 6am, we went to the starting line and assumed we'll be running together the whole way. Unang turn pa lang UPHILL agad. This was supposed to be the easy part of the run but race directors chose to start uphill. (Grabe lang!) CJ, Rodel and KC went ahead of us. I paced with Lee and Yuri and Cath was behind us. Good thing I brought my on camera so maka-picture along the way. I goofed off with Lee sa uphill. I tried running backwards. Mas madali pero di safe. Then, we'd walk a little and then, run when the roads became less steep. 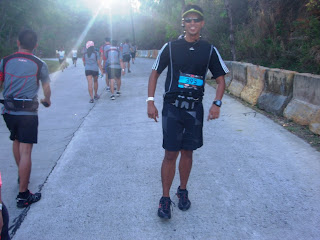 We breezed through the downhill part of the road (Sayang ang gravity!) But we also took a brake to take a picture of the view. Then, we were off to the beach. Running in the sand is challenging so I caught myself letting Lee go ahead a little farther while I took walk breaks and took pictures of the beach. Napagod na din si Lee at nag-picture na kame until heading to the mountain trail. Ang hirap na mag-picture at this point so tinabi ko na yung camera habang nag-struggle umakyat while waiting for our turn. (Pila kasi paakyat ng trail) 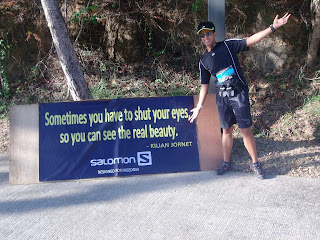 Motivation on the road 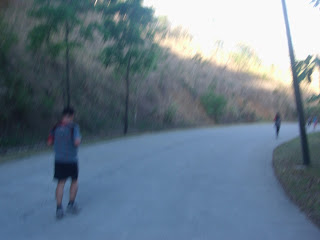 After heading up, the next part of the race was heading down. (Grabe din ito!) Walang tigil na pababa. Ansakit sa legs at pwet! Anyway, we saw Rodel, CJ and KC on their way up and even saw Rejie and Bata who were running 24km. The view was amazing. This is why trail runners keep coming back for more. You get to be closer to nature in this kind of run events. When we arrived at the turn around point, it was another great view. Thanks to Kuya Marshall who was ready to take everyone's photo. 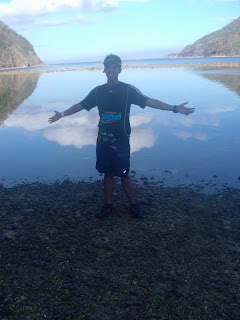 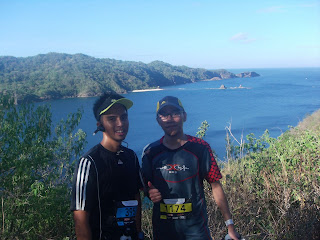 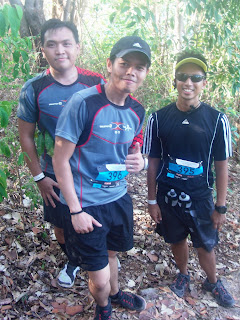 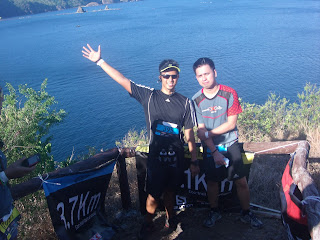 After almost an hour, we were just at the half way point and were about to head back that meant aakyat at baba at aakyat at baba na naman. It was real challenging but we did it anyway. We took breaks at the great looking rock at the highest peak marker and it was back to cursing our way to the beach. 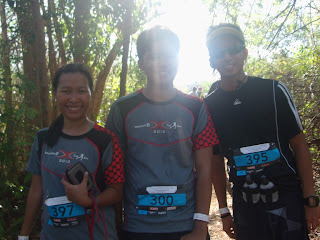 After more than an hour at the uphill road and the mountain trail, we headed to the beach path and pushed to run to the finish line but it was difficult to maintain a pace so we walked some parts until the marker that the finish line is almost there. We tried to keep up a slow running pace until the finish line and officially finished at 1:37. 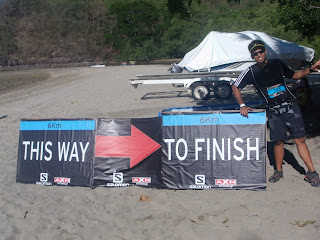 After crossing the finish line, we were provided breakfast with a choice of chicken, pork and fish. We were handed a bottle of water with the choice of gatorade in another booth. We waited a while until Bata finished within the cutoff and then, opted not to try the facilities of Pico de Loro kasi ang init duon. 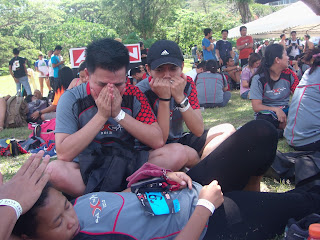 Waiting for Bata to finish

After the race, PRC members who rented the van headed to a nearby resort in Nasugbu. We planned on staying at Maryland Resort but we found one of the locals who talked us into spending the day at the resorts beside Punta Fuego. It was a 15 minute boat ride to the place. We placed our things in the hut we rented and had late lunch with "potluck" baon. Then, we spent the rest of the day swimming, relaxing and cleaning ourselves up at that place. 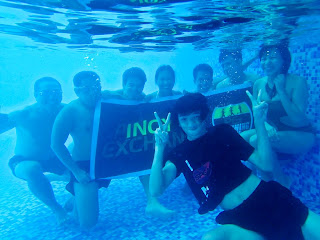 I was a fun day since I got to spent it with my PRC friends.

The race route was challenging. A lot of people weren't able to reach the cut off because of how challenging it was. The view was great. I really felt one with nature (Weeeh!). 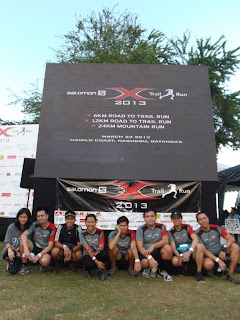 Hydration was one aspect of this race that needed improvement. Most of us were under the impression that there will be a water station up in the mountains but the water stations was only located in the beach near the hike up the trail. Runners had save their water. 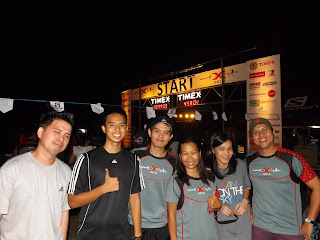 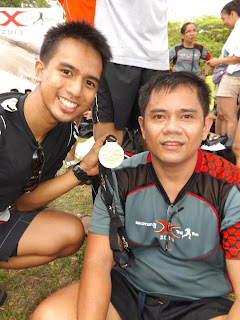 Bata made it to the cutoff

Congratulations to the finishers!