Rehoboth Beach Seashore Marathon is an annual running event organized the Rehoboth Beach Running Club starting on 2009. The race route covers in the Rehoboth Beach roads, nearby neighborhoods and running trails. In 2012, the race was held on December 8. Compared to the other races I was able to participate in, this is a smaller race. As all runners marathoners and half marathoners started in one wave. 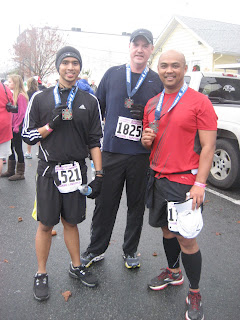 As I previously mentioned, I prioritized on being part of this race since I wanted to run in the Rehoboth beach when I visited it during the Labor Day weekend. When I was able to deposit my allowance money to my US bank account, this was one of my first purchases back in October. I didn't have any special training for this since I was deadset on completing my TBRDM training run so I had maintenance runs on weekdays and long runs in the weekend from the said training to prepare for this race. 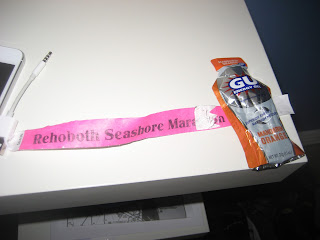 The annoying hand thingie I had to wear all night

My sore legs had already recovered from the Philadelphia Marathon and I planned to do the same strategy as I did in that race. I would run and do galloway until I finished. My uncle booked a hotel on a Friday night. The race day would be on Saturday morning and we'll head back home on Sunday morning. I had to leave work early on that Friday night but we encountered traffic so we arrived in the race packet claiming venue a few minutes before it closed. The race organizers attached the post event pass on my hand so I was forced to sleep with it on my hand.  If I removed it, I can't enter the post race event.

It was a cold morning (but warmer compared to the cold from previous days). We drove to the starting line and parked nearby before making it to the starting line. It really was a smaller race since they didn't have the big race structures. There wasn't even a starting line but line with the disposable timing chip line. I ran for 8 kilometers and did 5-1 galloway until the finish line. The route started in the Rehoboth Beach road then leading to nearby neighborhood leading to a trail for runners. I was expecting the trail be a short detour but apparently it is almost half of the route. I was doing galloway during that trail so I was running with the same batch of people. 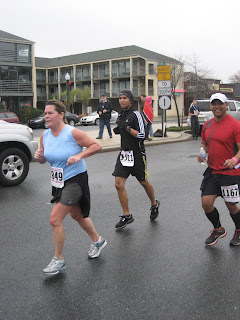 Almost at the finish line

The race was held after a strong rain the day before so we had to pass by some muddy holes. Good thing I wasn't in the head of the race where runners are zooming. So there was no mud splashed to my shoes. 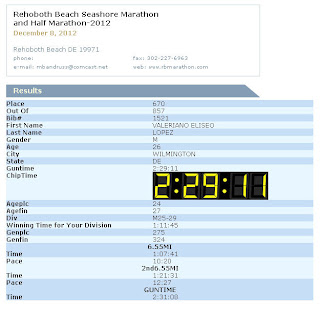 After the race, organizers gave us our medal and led us to the post event area which has a breakfast buffet composed of pasta, salads, burgers, soups, pancakes, oatmeal, juices, coffee and beer. We maximized our stay there since we are Pinoy and we just ran 21k. 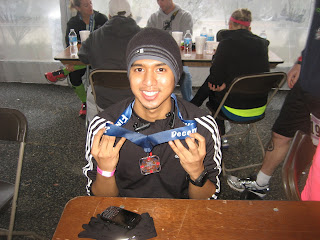 An hour later, we went to the outlets and shopped all day. My feet even gave up on me but I was not done shopping. 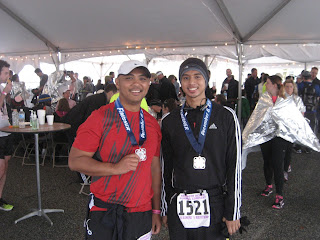 It was all worth it and the highlight of the experience was the leg hurting shopping. 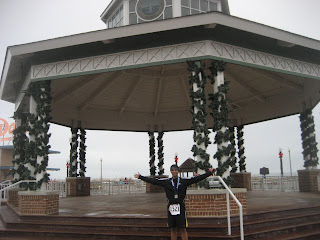 This is where the race started


There weren't marshals on the race route but participants weren't cheaters and were disciplined to follow rules. Hydration was father from each other but this is a common practice in international races. I didn't expect the trails and the muddy road so I had to breeze through it when I was in the muddy roads. The medals have the RBRC logo with a 2012 yarn so it may seem like they could use the same medal in the next year.

galing! wherever you go, you join a race! :)

Talagang I made it a priority to run races during my stay.

Luckily, my uncle is an avid runner din so may kasama ako...