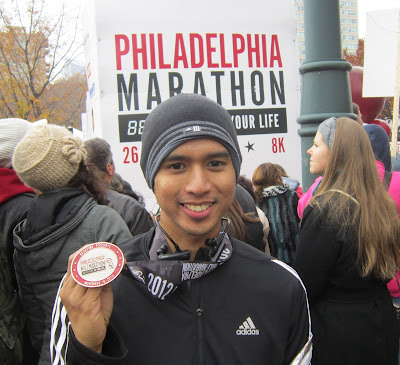 At the Philadelphia Marathon Finish Line

Every third November of the year, Philadelphia hosts the Philadelphia Marathon weekend composed of an 8k Fun Run, a Race Expo and the half marathon and marathon race. This race was first organized in 1994 and has been inviting runners from all over the East Coast US to finish record times in their preferred race distance. The race route features famous landmarks of Philadelphia like the Independence Hall, Benjamin Franklin's Burial Place, The Liberty Bell, The Rocky Statue and urban neighbors like University City and South Philadelphia. For the year 2012, I was fortunate to be part of this event. Though unplanned, I was able to run (and walk) the half marathon distance. It was an even bigger event as they supported a contingent of NY Marathon runners since that event was cancelled due to typhoon Sandy.

Before I came back to the US, I was already decided to skip the Philadelphia Marathon since the slots for the half marathon distance was almost full and I was decided to join the Delaware race on December and race fees were WAAAY more expensive so I have to prioritize on the races to join. I already ran part of Philadelphia so I was willing to cheer my uncle to his marathon finish instead of joining another Philadelphia race. 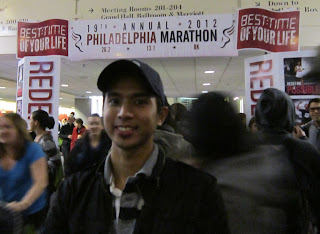 On my weekend back from home, My uncle's friend, Steve, had a shoulder surgery which had halted him from using his slot on the Philadelphia Marathon. My uncle was trying to convince me to take his slot instead and run my first marathon there. But I already made up my mind to run my first marathon in the TBR Dream Marathon on Feb. 2013 and I wasn't in the part of training where I could run 42km so I forego the opportunity. 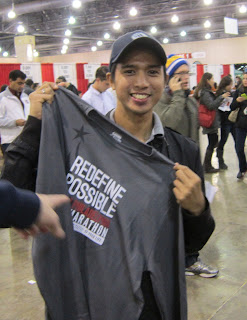 Pretending that this is my shirt

On Race Weekend, Steve hasn't sold his slot yet so he just claimed the race paraphernalia on the race expo. I was scheduled to run an hour and 30 minutes on my training plan so I was planning run while my uncle was doing his race. Fortunately, Steve found a rule that a greater distance bib can be used to run a smaller distance so I decided to run a half marathon using his marathon bib. 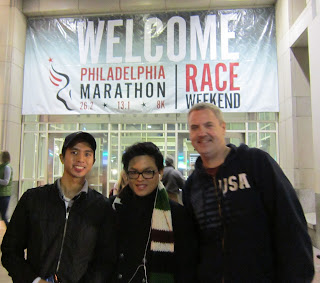 Done with claiming stuff at the Race Expo

On another note, I bought a cool Race belt that said "WTF (Where's the Finish?)" during the Race Expo which I used on the race. (Just Sharing...) 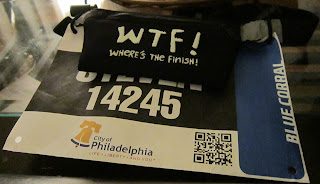 We made our way to the Benjamin Franklin Park early as the gun start was early in the morning. As expected, they were tons of people. But the Philadelphia Marathon crowd was a little smaller than the Rock and Roll Half Marathon but the participants seem to be more serious runners. I joined my uncle on the wave he was in so we could start together. In this race, the marathon and half-marathon start at the same time but they are still arranged based on their estimated finish time in waves. After passing 6 faster finish waves, we made our way to the starting line and started running. On the starting line, we were able to high five Philadelphia Mayor Nutter. 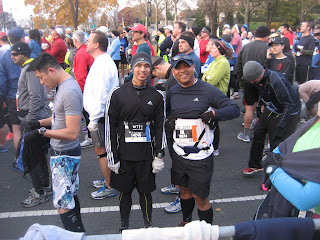 Waiting for our gun start


We ran at our own pace and my uncle is faster so I lost him on the first kilometer. Also, I had to pee so I  looked for a portalet at the third kilometer so I was even slower. But he was running 26 miles and I was running 13 miles so no point comparing. That day was a cool morning so I was wearing my "winter running attire" which composed of gloves, a fleece bonnet and a long sleeve shirt over my shirt and shoes. As planned, I ran 1 hour and 30 minutes and ran 5-1 galloway until the finish. It was a challenge as my training wasn't ready for a half marathon distance and I just pushed myself to finish the distance. Towards the last kilometers, I took longer walk breaks and I was even tweeting as I was walking. The race route was slightly different that my previous Philadelphia Race. 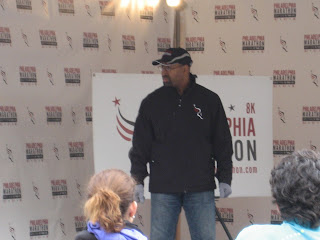 Here are some pictures that I capture on the race: 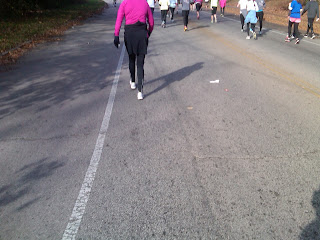 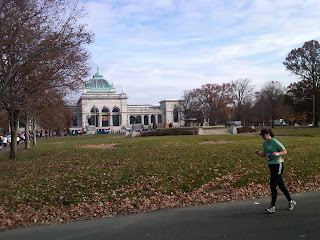 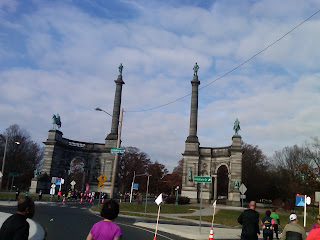 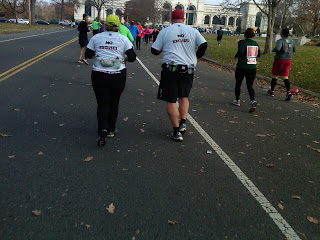 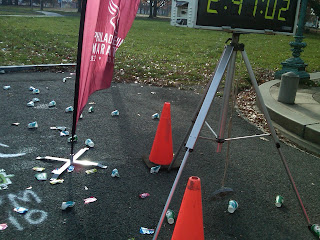 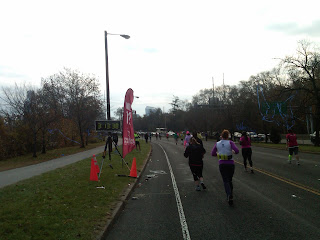 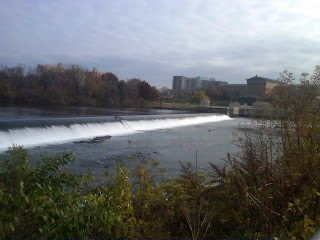 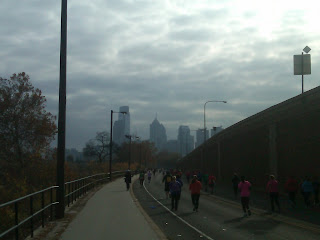 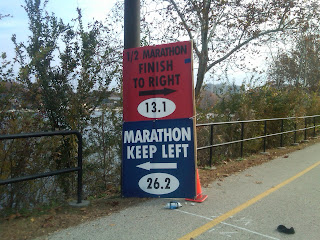 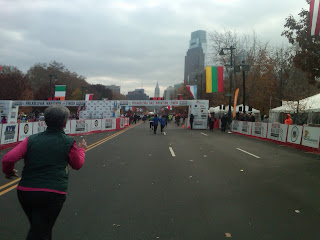 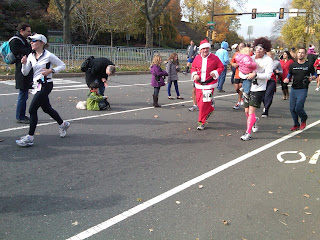 I finished at 2:56:11 based on my garmin. I started at the middle of the pack and finished near the walkers. After my race, the organizers led us to the event area where they gave us a reflective sheet which was used to warm us up, a medal and a bunch of food and refreshments  And of course being Pinoy, I ate more than my share (Nagpakabusog ako!). Food included bananas, apples, protein bars, water, energy drinks, fruit packs and pretzels. There weren't finisher items available in the event area. I guess a runner should already bought their stuff during the expo. There were also amateur bands near the family greeting area.

I took token post race photos with my cousin, Paolo. I wanted to take start and finish line photos but there was just a lot of spectators. My uncle finished his marathon around a 5:30 finish. After a few more photos, we went back to the Parking to have a Thai Lunch. But the parking took way too long to get out of. It took around 2 hours and we were starving when we arrived at a Thai place near my uncle's house. 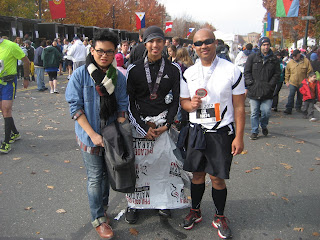 At the Event Area 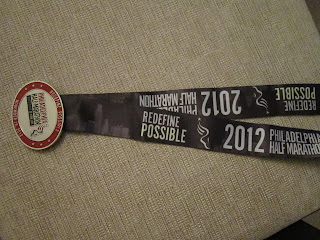 Thanks to Steve for letting me use his bib to run the 13.1 miles of the Philadelphia Marathon 2012.

The race route was scenic indeed. It featured a lot of the Philadelphia monuments. The elevation was also varying since we ran roads, neighborhoods and parks. For one time, it was warm,  then it was cold, then warm again. Hydration is also available and abundant but they were farther to each other than Philippine races. Pinoy races are spoiled with the amount of hydration in races. Race gels at the 8km tasted great. (Remind me to get vanilla flavor in my next race.) The race gels seem too far for 21k runners but we have to consider that the marathoners are the priority in this race. One thing I didn't like is that there were no photographers in the event which was good in one sense because there were no temptation to spend money for photos. Photos in US races are not free. They are legit businesses in US. Each photo cost $15 to $60 and shipping is not yet included. It was a great race overall. The Mayor's participation was different experience. C'mon who can say that the the Philadelphia Mayor gave them a high five. 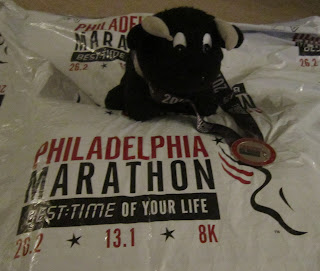 Playing with my medal and reflective sheet