7 Eleven (7-11) Run 800 is the first running event that used the Cavitex Road as a running route. After being postponed twice, the race pushed through last January 20 with the starting line at Aseana City in Paranaque, a few minutes away from SM Mall of Asia. 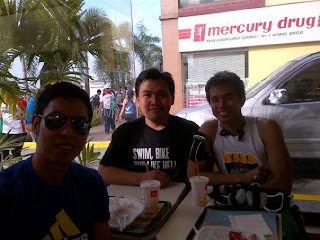 Post Breakfast with CJ and Noel, pretty much the same setting where
I was influenced to join Run 7-11

I didn't plan to join this event. I originally thought that the race will be hours away. Apparently, the race start was in Aseana City which is minutes away from SM Mall of Asia. CJ aka Run Adobo King convinced me to run this race since I'll end up running alone anyway in the weekend for my two hour LSD run so I decided to use the race to run my 2 hour LSD. So two days before the race I decided to run in it.

I woke up early since Aseana City was an unfamiliar territory plus I can't be late since CJ has my bib and he's running 30 minutes earlier. The taxi arrived early and I met CJ near McDo. We found Noel, Deemen Runner, a few minutes later and looked for a place to park his car. I guess there were more cars that arrived than they expected so organizers had to make use of the empty roads as parking. 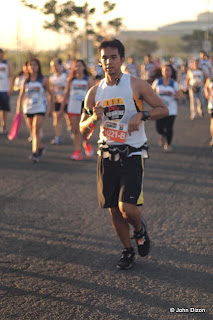 The parking was 10 minutes away from the race start so CJ and Noel who ran 21k was a little late on their gun start. They were asking me to join them but the marshals were strict on letting 16k runners on our gun start. Since I arrived early, I was on the front of the crowd. I was even beside Kenyans who may had won the race. I tried standing beside them so I could get some of their "fast runner" energy but I got negative vibes (or should I say smell) instead. I didn't plan to run fast. I was to maintain 10-12 mins per kilometer so I could prevent injuries. So when the gun start was called, some people pushed me aside. Not really a wise decision to go in front of the 16k crowd.

I was tempted to run fast and go with the crowd but I stayed behind and trained myself to run continuously at a slow pace. Mahirap pala maging mabagal lahat na lang ng tao dinadaanan ka. Anyway, I sticked to  my pace and finished the race without walking. 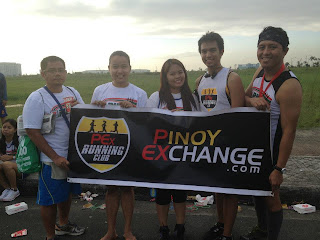 At the post-event area

I even found Rodel who was running 21k towards the end of the route. We ran together until the finish line where he finished at 2:39 and I finished at 2:07 from my Garmin.

On the way to the event area, I accompanied Rodel in getting his 21k finisher's medal. We found Abi, Bata, Kath, Nikki and Roldan too. There was lots of freebies in the event area. We had donuts, energy drinks and ice cream. One of us had too much freebies. We were even teasing her that she was doing her grocery. 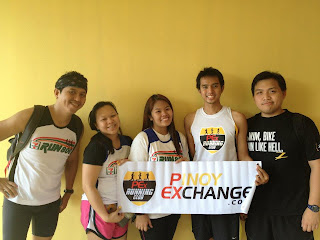 I met CJ and Noel at McDo as they had their breakfast. Later the rest of the PRC peeps joined us. 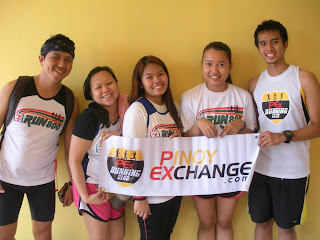 This surely beats doing a 2 hour LSD on my own. Also, we made history for being able to run in Cavitex for the first time.

The race route was a nice change of scenery. 21k runners had the best view when they passed by the actual Cavitex back drop. Hydration was great. We were so spoiled with hydration in every kilometer. Parking caused runners to be late since they didn't expect to get that much runners. But the freebies made the post run event area. They had enough to feed some of us in our post-race breakfast.