On this weekend (September 16, 2012),  I ran and finished the Rock n Roll Half Marathon Philadelphia. My uncles urged me to join this race when I arrived here in the USA more than 2 months ago. They said it was a great way to see Philadelphia and I get to experience how run races are in the US. Hours later, I went to the competitor (registration partner) website and spent pesos on this race. I must say it was a great thing to do. The race was held in a great day, great crowd and great route.

Weeks after I registered for this race, my uncle sent me a copy of a training plan for a half marathon with a target of 2 hours finishing time. I followed the training plan by running for 5km or more every other day and a long run from 10k to 18k on weekends. I usually ran around our neighborhood in Wilmington during weekdays and driving over Alapocas Run Park to do long runs until Brandywine Park. I didn't do it religiously. Consistently, I'd miss a few weekday runs and didn't run for a few weekends but I did do training. I was also doing the Insanity program while training so it might have helped (or not) in conditioning my body for this race. 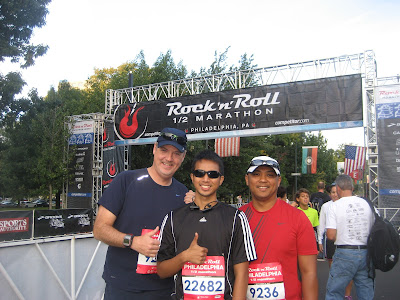 before the start of the race

A day before the race, I was able to attend my first ever race expo. I described the experience in a blog post.

Up early at around 5am (not that early as compared to Philippine races), we drove to Philadelphia and parked a few minutes away from the race gun start. After parking, I could see that this race was gonna be the biggest race I ever joined since everyone who parked in the parking building was going to run in this Philadelphia running race. As we walked closer to the staring line, there was indeed a lot of runners. The environment was festive and the photographers are everywhere. We were at least half an hour early so we had time to have a few bites to eat (which I passed on having since I'm used to running without food) and queue up on toilets. Given that it was a pretty large race, the queue was quite a wait. 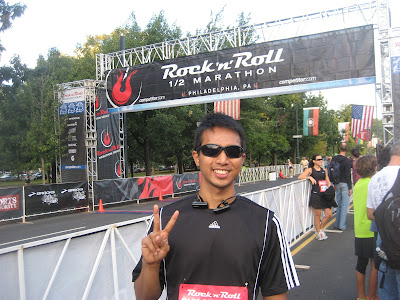 at the starting line

As the starting time was about to begin, I went with my uncles to wave 9 (in which my original wave was wave 22). A few minutes later, our gun start began and I was running the Rock and Roll Half Marathon Philadelphia. The streets were wide and even if there were thousands and thousands of people, I was still able to find a place. The weather was great. The sun was high up but the air was cool and the complimented each other. It was bad for my skin as it attributed to my darker complexion but the experience was worth it. I could really feel how different an experience the race was as I was seeing bands on mile markers and seeing the Philadelphia back drop with large buildings, wide gardens and historical monuments. 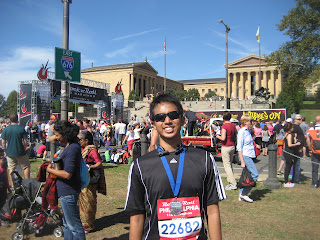 People were passing me by since I was running at an average pace of 10:32/mi while people was doing way faster but I always had people running alongside me since it was that big of a race. 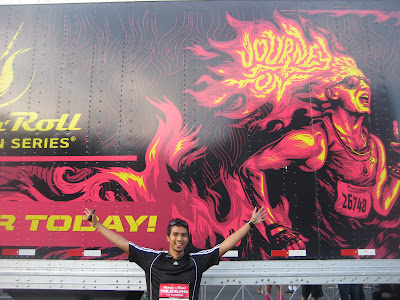 I finished at 2:24:30 which was my new PR for a half marathon race. I guess the training paid off.

The race was a great one. There was enough hydration for water and energy drinks. Half way they gave us energy gels. It would be below the standard of a Philippine race but it was fine if you were the type who was fit enough to run. By the way, it would be a shame to walk on this race since everyone else was running at a fast pace.

I was the "slowest" in our bunch so my uncles had to look for  me in the finish line. They provided spectator meet up places arranged by the letters. It would be a great idea to have this in big races back home so it would be convenient to find each other after races. 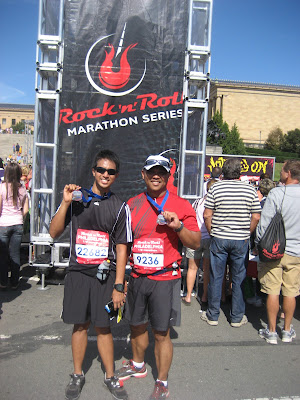 at the finish line

After that long run, we were treated to protein drinks, protein bars, snacks before proceeding to the spectators area. Being Pinoy, I took more than my allotted share but the supply was abundant so it didn't  matter. At the spectator's area, they don't have a loot bag or a finisher's shirt but you could buy your own souvenir shirt and have your medal engraved with a price.

We were treated to a Haley Reinhart performance after the race. 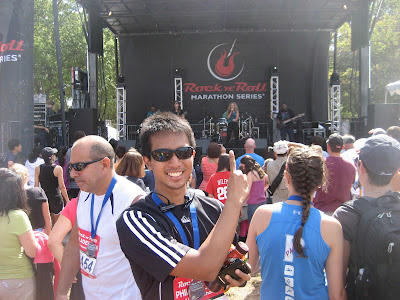 The overall experience was great and I am proud to have added this to my list of accomplishments. I will do this again if I have the chance.

Email ThisBlogThis!Share to TwitterShare to FacebookShare to Pinterest
Labels: 2012, Half Marathon, Philadelphia, Rock and Roll, Rock and Roll Series

I laughed when you said you took more than the allotted share of snacks since you're Pinoy :) Congrats, looks like a fun run! :)

"Being Pinoy, I took more than my allotted share" -> best part of this blog post! LOL! Tagal ko na hinihintay tong blog post na to! Congrats on the PR, Thirdy! Still aim for that sub-2 finish! :)