One of the most anticipated run of the year is the Robinson's Supermarket Buddy Run. And this year, it was held in July 1, 2012 at the Bonifacio Global City. Mostly known to the running community as the fun run with the "best" lootbag ever, usually consisting of grocery items.

Being a unique race where participants should start and finish with their buddies, we didn't want to let this race pass so CJ and I had our friend register us to the 5km race since the singlet looks livelier than the 10k singlet. This race was right after our PRC team building and Run United 2 so we had no real training and lots of relaxed time. 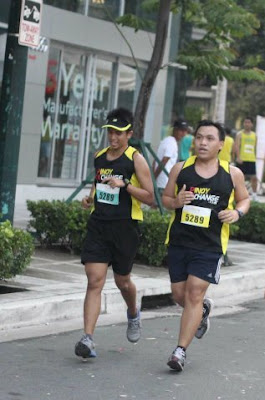 During the race (last stretch amidst the side stitch)

We also decided to sport the PRC singlet on this event to represent the group and for easier spotting for photo in the FB albums. It was sort of weird to look unique as we usually wear the event singlet. CJ and I paced for the whole 5km and was running at average pace of 10:10/km. At the last 2km, I suddenly experienced side stitch and had to slow down. CJ still paced with me and encourage me to keep pushing. We finished 5k at 30:39 based on my watch. 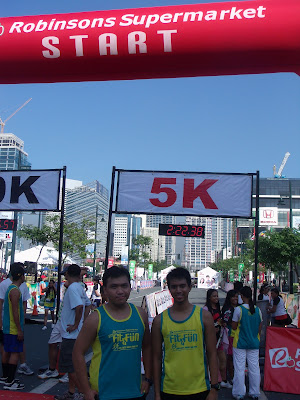 Right after the finish line, the organizers had handed us a heavy bag of grocery items. As expected, the "best" loot bag ever.

After the race, we decided to immediately get our bags since the organizers didn't really think how to keep all the bags in order. After that, we made our way to the sponsors booths. They gave out food items like hotdog, oats, cereals, taho and other things. One of the booths featured UST students practicing physical therapy by stretching out runners. 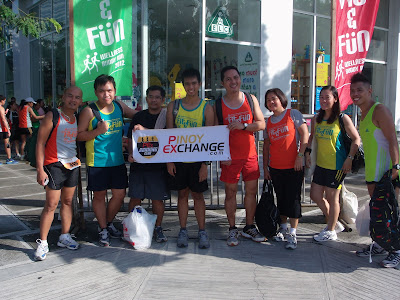 Also, we found the rest of the Pex Running Club fellas and had the token post-race photos. 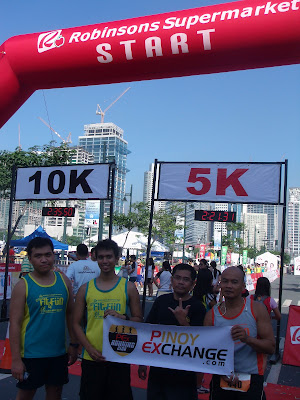 Almost all of the elements of the race played well for a great race day except for two miscalculations. They needed improvement in their baggage management. It took us a long time for the attendant to find CJ's bag since they didn't organize the bag in any order and just dumped everything on the floor. They also needed improvement in the sponsor's area since they laid out too little space for all the runners to enjoy the post-race fiesta. Nakipagpalitan talaga ng pawis para lang makakuha ng food items. But great timing and the race route was laid out fine for a peaceful and smooth sailing race.
Posted by Thirdy Lopez at 10:03 PM