The Toughest Men’s Health Urbanathlon yet happens in October 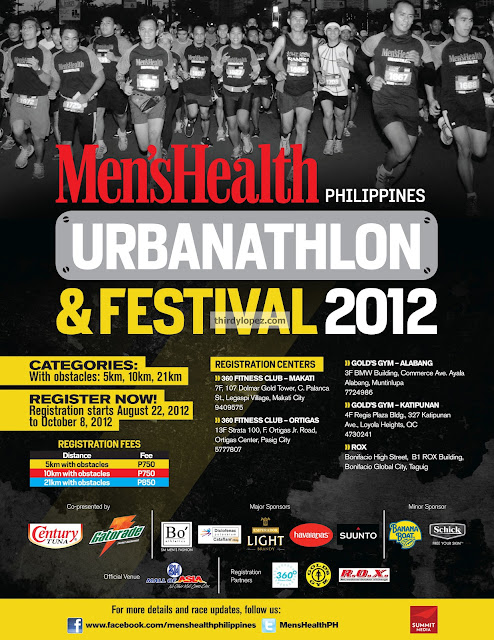 The Philippine edition of Men’s Health, the largest men’s lifestyle magazine, will hold its annual Men’s Health Urbanathlon & Festival event on Sunday, October 14 at SM Mall of Asia from 5:00am – 10:00am. Celebrity host, Rovilson Fernandez, will be at the helm of the event.

On its 6th staging, the country’s original obstacle laden race is expected to be significantly tougher, bigger and more intense this time around. Designed to test the urbanathlete’s fitness level, the event now has a 21km distance aside from the usual 5km and 10km categories.

Registration for the Men’s Health Urbanathlon begins on August 22 and ends October 8, 2012. The registration fee for the race is P750.00 for the 5km and 10km distances and P850.00 for the 21km distance. Registration centers are located at 360° Fitness Club Makati & Ortigas, Gold’s Gym Alabang & Katipunan and at ROX, BGC. At the event, each participant will be given a complete racing kit including their urbanathlon singlet, race bib, drink stub from Gatorade, food stub from Century Tuna. Race finishers will get Finishers medal with Men’s Health lanyard, Finishers certificate, Urbanathlete shirt and Urbanathlon drawstring bag.