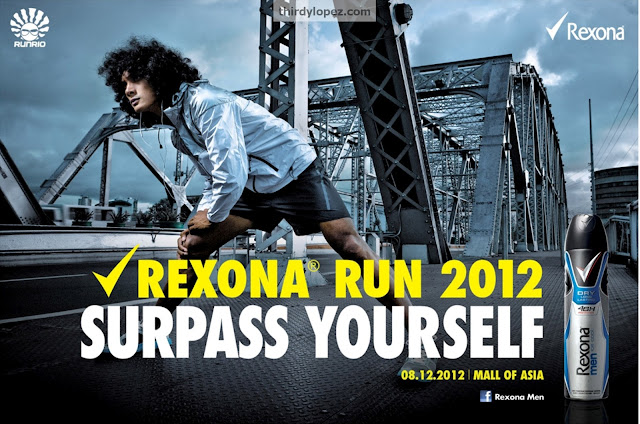 Prepare to push yourself to the limits when Rexona Run 2012 unfolds on
August 12 at the SM Mall of Asia grounds, featuring a new category,
more prizes and exciting features.

Get ready to outrun yourself at the Rexona Run 2012 happening on August 12 at the SM Mall of Asia grounds.  A part of the Runrio Series, this year’s edition is bigger, with a new category, more prizes and exciting features that will bring running to a higher level.

Registration is ongoing until July 29 at Riovana stores in Bonifacio Global City and Katipunan, and Toby’s branches in Trinoma and SM Mall of Asia.  Online registrations are also accepted at www.runrio.com from now until 12 midnight of July 22.

Adding excitement to the event is Rexona’s challenge for runners to beat the “industry standard,” wherein commemorative key chains will be given to finishers who end the race on or before the recommended finishing time.  To qualify, 5K runners must cross the finish line on or before 6:20am, 30 minutes from gun start and all 21K runners need to finish on or before 7:00am, 2 hours after gun start.

To ensure that each participant keeps within their target finishing time, pacers shall be deployed for each race category.

To help runners train and commit to a faster finishing time, Rexona Run 2012 has created the Rexona Run Outrun Yourself App, which can be downloaded for free via the Rexona Men Facebook page.  The app helps runners set a target time for the category to be run courtesy of a running playlist and an occasional voice over as their time check, which they can listen to while training.  During the actual run, the app can also be used to help runners set their pace.

Rexona will also encourage participants to be responsible runners by keeping race routes trash-free by placing trash bins in strategic locations for proper disposal of water bottles, sponges and other trash.  This ensures a cleaner race route now and in succeeding editions of Rexona Run.

Good to see you running and running. I hoope I can do this sport again.

i like to try running in a fun run event. kaso i am already eyeing one fun run even too, that's conflict with the schedule of rexona..