One Run, One Family, One La Salle (Orofols) 3

Last June 10, 2012, the De La Salle Alumni Office had organized a fun run called One Run, One Family, One La Salle (OROFOLS) 3 at the Mall of Asia.

This race served as a way to test our target pace for Run United 2 (RU2). The target for RU2 was 2:30 so that blogger buddy and pacer, CJ, can attain a PR for 21k. Unfortunately, we were winging it and hadn't trained properly to attain this pace.

I met CJ at the starting line since I was late for the assembly line. I found fellow Titan, Mark, and Ayala Triads, Moy. Gun started was earlier than expected. It was 30 seconds earlier based on my watch but it was okay since I wasn't late for the gun start. 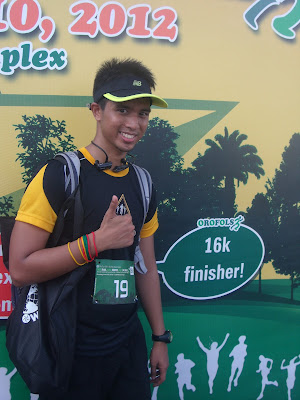 We really didn't have a plan on how to push for 7:00 min/km so as we ran as as we can. At the first kilometer, we did a pace at 5:50 mins/km. We were able to maintain a less than 7 mins/km for the first 4k but we slowed down and walked a little from 5km onwards. The scorching heat slowed us even further. We initially did 4-1 galloway but went even slower due to the heat. The road wasn't closed for the race so it was also annoying to find cars fighting off your position in the race. 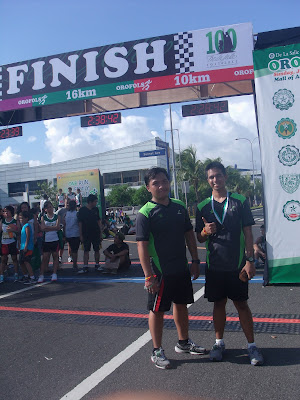 At the finish line with CJ

My Soleus read that the race route was more than 16.5km and the heat at 7:30 am didn't help us to finish strong. The finisher's kit though was worth it. We were expecting a finisher's shirt but we were surprised to see a medal too. Unfortunately, everyone had a medal even the 3k runners so it didn't feel special. The place was buzzing with kids which makes the environment festive.

The race had a great turn out, most of the participants were freshmen students from DLSU schools since their professors probably gave them incentives for joining the run but they crowded the 3k race. The race route was as expected chaotic. The heat didn't help at all. The scheduled gun start was way too late for a great long run so we had to face the sun's heat. 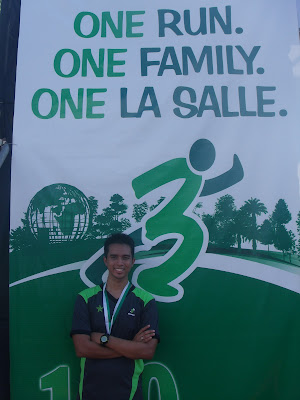 At the Finish line arc

The road wasn't closed so we had to battle cars in the race. The marshals weren't visible as they wore a black shirt with a teeny tiny logo of the event. But the finisher's kit was great with the surprise medal and the finisher's shirt where they considered your size since they allowed you to check out if the shirt fit you. 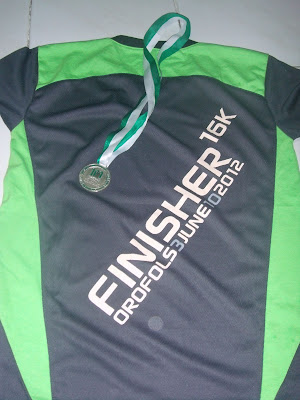 La Salle Runs aren't perfect so in the next La Salle Run you join, don't expect to be 100% satisfied.
Posted by Thirdy Lopez at 10:32 AM