I first found out about the event as I was browsing through my facebook timeline and I instantly shared this to my friends from Pex Swim Team and Team Titans. I joined through the online option where I had to pay through a bank account and email the registration form. My friends also used this option so I was confident that there wouldn't be any problem come race day since after 2 weeks I haven't received a confirmation email. The FB event was also helpful as they had continuous updates and replies to all questions. I asked about my confirmation letter in the FB event I was assured that my registration confirmation was on the way but it didn't come. 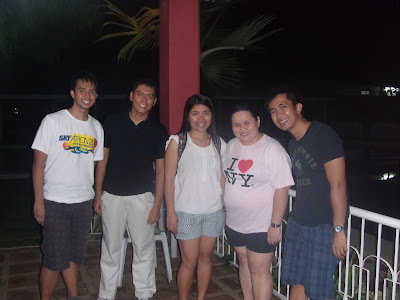 Swim Team after the Dryrun

Honestly, I had zero training for this event so I just planned to wing it. Good thing! My Pex Swim Team decided to do a dryrun for the aquathlon and that was my only serious training for the event. I clocked at around 18mins for 600m and finding out that I needed to practice my turns. We did a short run around Camp Aguinaldo. I didn't bring my GPS watch so we just ran for 15 minutes around the quadrangle. 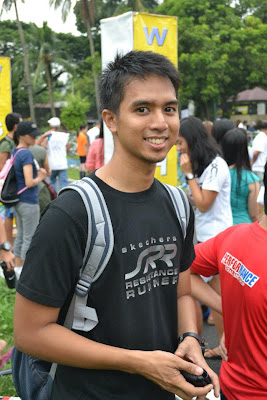 Assembly at the Newbie Triathlon event

The  race was scheduled 2 hours than the usual gun start of races so riding the MRT was a option. We got to the venue at the assigned assembly time but when I got there my name wasn't in the list. Even after the confirmation in the FB event, I didn't have my kit. The organizers gave me an improvised kit but it said triathlon and my swim cap was white when it was supposed too be blue. That was a little disappointing since I made my payment early and made numerous attempt to follow up on my confirmation and I was promised that it was on the way but it never did. 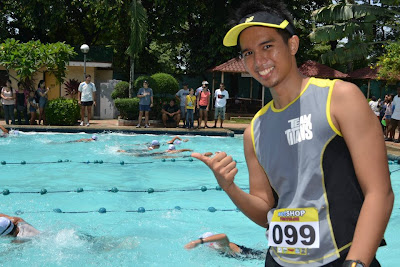 Cheering for the triathletes

Because of that, I didn't have a transition basket. Good thing that Gelo wasn't sick this aquathlon so he let me share his transition box. At around 9:30 am, we made our way to the pool where we started the swim leg of the aquathlon. As expected, turns slowed me down together with being bothered that I just kicked someone and someone kicked me. This was a norm in triathlons though but it doesn't make it less annoying. Anyway, I officially finished my swim at around 20 minutes and made my way to our transition baskets. Noel, Wins and I pretty much finished the swim leg at the same time but since running is their specialty. They pretty much zoomed to the finish line while I maintained a constant pace finishing at around 30 minutes. Since the timing was manual, there were a few errors in my teammates' results. Good thing we ran the course close to each other and we were able to correct this error. 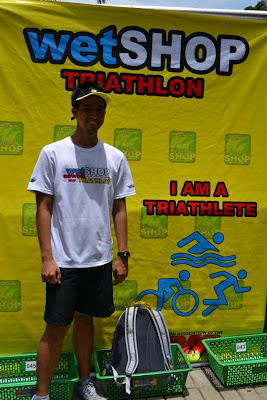 Overall, the race was just OK, with many points of improvement. First of which is to be more organized in the registration. Another is to assign people to jobs so that everything would be on schedule. The race pretty much revolved around their boss so we had to wait for many people before each race started. Hydration was enough. But the distribution of finisher's shirt and medal wasn't done orderly so those who left early weren't able to get their medals. They made amends though by distributing them at a later date. Another thing to consider is using a sound system so announcements could be done orderly. 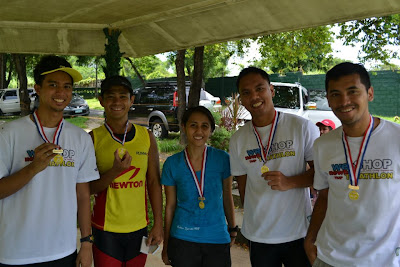 Showing off our finisher's medals

After our aquathlon, triathletes had to do the course at a harsher time where the sun is harmful, and more so for the relay teams. The sun around the bike and run course had big trees but the swim pool was directly under the sun. The schedule of activities together with actually running the event drained most of my energy so I retired to my bed as soon as I was able to get to it.

Accurate Results in my case

Photo Credits to Gelo.
Posted by Thirdy Lopez at 9:46 AM