Merrell Adventure Run is one of the most challenging trail runs in the country and this year's event was held in Timberland Sports and Nature Club on June 2, 2012. 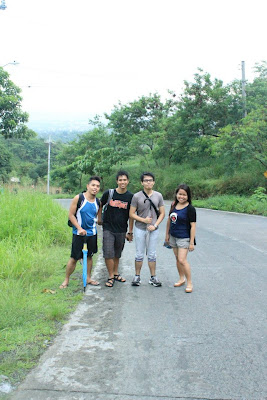 Hiking up to Timberland

Braving the rain to make our way to the finish line

Since we had more than 20 runners in this event, we decided to support our runners by cheering and taking photos at the finish line. I, together with Angie, Noah, KC and Bert, woke up early and made our way to Rizal. The way up to the Timberland was a long uphill hike and we braved the rain to the long walk to reach the finish line.

It took us a while but we were able to cheer everyone of our club members.

Yey for Kay finishing 5th in the 10k women's category!

Yey for Jepoy and MJ for finishing 21k!

Yey for Nino and his wife!

Yey for CJ and Cath!

Yey for Cath and Yani who survived the run despite injuries!

Oh no what happened to the Adobo King? Antagal kasi nina Jomar, Mavic and Abi?

An applause for our finishers, Abi, Jomar and barefoot Mavic!

What a fun day! Thanks to PRC and MAR!

nice blog. me pix lahat ng finishers \o/
thanks for supporting us. *mwah*

Have a great day!

Thanks for the support! Abi pala to! :D