Called Riovana by Rio and his business partners for “runner’s nirvana”, the one-stop shop is all about “the sole of running”. Designed as a runner’s resource and sanctuary, it caters to all running and lifestyle needs and features all the products, services and conveniences that runners need, complete with showers and lockers so runners can freshen up after a run. There’s also a coffee corner, computers, facilities for running clinics set against street smart interiors. Its accents are a manhole, a fire hydrant, brick walls, a two-lane street with a pedestrian lane and a finish line complete with winners’ podium, which is the cashier’s area. 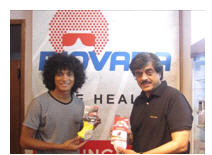 One of the many products sold at Riovana are Thorlos® Socks. The 30-year old, USA-made brand preferred by pro and amateur athletes carries over 35 types of socks for everything from running to hiking to tennis to golf and basketball – all characterized by their customized and scientifically structured pads with the ability to adjust to the needs and movements of each sport. Thorlos®, the originator of the activity-specific sock, also has walking, fitness and dress socks and is the first socks line to be granted the Seal of Acceptance by the American Podriatic Medical Association.

In addition, Thorlos has been worn in the New York and Boston Marathons, two of the most prestigious running events in the world and has been the recipient of Runner’s World (US) Best Gear Award.

“Runners, among all athletes, experience the most pressure on their feet. We carry Thorlos® socks in our store because runners swear by it,” said Coach Rio. “There is a story in the history of triathlon where a runner forgot to put on his shoes and all he had on were his Thorlos socks. He ran the leg and when he reached the finish line, the socks were still the same – no damage at all. That’s how sturdy they are.” 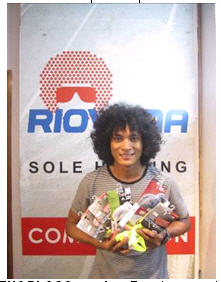 “Socks are as important to runners as running shoes, maybe even more important,” continued Rio. “Good socks must prevent friction, give good cushioning and prevent sweating. Thorlos® does all of these. They have really good cushioning and really protect your toes and the balls of your feet. Foot doctors recommend Thorlos to prevent blisters and to eliminate injuries. Also, your feet don’t sweat in Thorlos®, so you can prevent foot problems like athlete’s foot and fungus, as well. If you ask people who have used Thorlos® for a long time, they’ll say that if it has one disadvantage, it’s that they seem to last forever – won’t sag, won’t lose shape or cushioning.”

“The new styles are very attractive and trendy. Thorlos® will appeal to runners of all ages,” Coach Rio added. “Wearing the right socks is one of the things we are trying to educate runners about. At Riovana we try to provide runners with all the right tools and information to speed them up on their road to running success.” 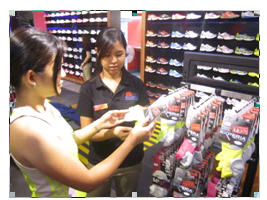 Exclusively distributed by Colerosh, Inc. in the Philippines, Thorlos® socks are available at Riovana stores at BGC, Regis Center-Katipunan, and soon at the SM Mall of Asia. They are also available at Rustan’s, ROX, Planet Sports, Tobys, RUNNR and The Athlete’s Foot.