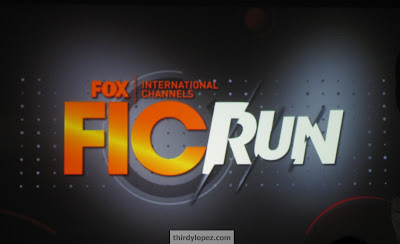 FIC Run is a fun run event that promotes running to couch potatoes of Fox International Channels, Inc. This was held last March 25, 2012 at Bonifacio Global City, Taguig. The fun run event was composed of 4 categories: the 500m costume run (where participants sported their best costume while battling it out to who sprints the fastest), the 3k run (run with the movie stars); the 5k run (run with the fashionistas, models and other celebrities) and the 10k (run for a cause where various non-profit organizations invited a number of runners to run for their own advocacies).

I decided to run 10k in this event. The original plan was to break my PR that was set in the Race for Orphans. But the night before, I had a late night and I was feeling lazy when I woke up to attend the race. I was undecided what to do on the actual race day and my body was still asleep so I had no plans until the 3rd kilometer marker. 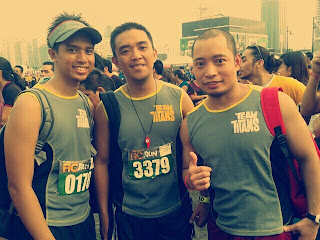 On another note, I decided to run as a Team Titan member so I sported out team singlet and meet other members of the team who I just met on that race. We started the race together but after the start we went on our own pace.

10k runners at the kalayaan stretch

At the beginning of the race, I ran in a steady pace. Not speeding up and not too slow. I was able to keep this pace. I sprinted for a few seconds just to keep my body awake. At the 5k marker, I planned to go at a higher speed but the 5k marker was in the slight hills of the Kalayaan exit so I decided to walk out a few meters since my heart rate was also nearing 190 bpm. From there, I remembered Coach Mherlz saying that the best way to get PR was to do farlek (that's when you vary your speed and effort in a run). In this way, I had overtaken a few people. 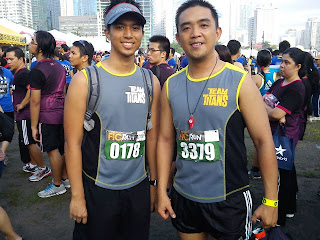 Lined up with Chaley na mabilis

But at the 8km, I started walking and running slowly as I was feeling the fatigue. Fighting the temptation of giving, I decided to attain my original plan but not with a 100% dedication as I wasn't really training for speed and running these past few weeks.

Yet I kept running some people overtook me but I got the lead when I sprinted. In a short minute, I tried to paced with this fast runner but came back to running slowly when someone was blocking my way. At the 9th kilometer, I was near giving up to attaining my goal. Thinking of doing it better the next serious 10k race. I was thinking of training this April for my next race in May. 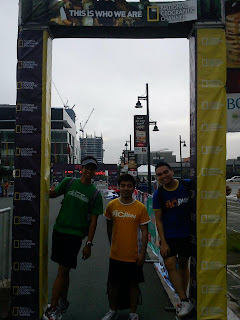 At the Nat geo Arch with Jaime and JC

Then this guy from Hands on Manila gave me a piece of chocolate. I ate it but spit it out since it was drying my mouth. And it might look weird in the photos if there was some taking a picture at the finish line. Anyway, I welcomed that gesture and tried to push myself to another sprint. Then we could see the assembly and then the finish line was there. I tried to run as fast as I can but I could only do a slow run to the finish. A few meters to the finish line I was the 1:01 marker passing and as I arrived in the finished line I missed my goal by almost 2 minutes. 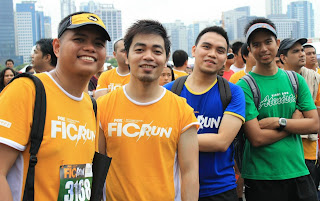 With Dom, Jaime and JC

But I was still happy with the result since I was running faster that I used to do a few months ago.

Happy with my results

I said a few hi's and hello's to some members of the Team Titans before I came looking for JC (who was running 3k after a 2 year hiatus to joining fun runs) and members of the Pex Running Club, Dom, Jaime and Bert. We took token photos around the venue and watched the post race festivities. 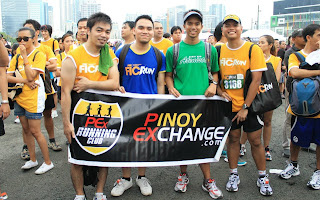 Post-race with the Pex Running Club

We stayed near the stage and Jaime showed us how he could douggie when he volunteered to participate in a "teach me how to douggie" contest. He didn't win though since lil Batman did the douggie way cooler.

Jaime teaching how to douggie

Overall, the race was great. The weather was fine since it didn't rain during the run event itself. The 10k route presented some new turns which stopped me from going fast since it has a lot of turn. This was a welcome change since it gave me the opportunity to catch my breath. I paid particular notice to the hydration stations that had an ample amount of powerade and the drinks was just the right temperature to drink.

Nicole bastardizing the winners' names in an
effort to seem "cool"

However, I was particularly bummed with the hosts, Nicole and Cliff. Nicole who mispronounced a lot of names in an effort to speak in an accent. I found that unnecessary since we are Filipinos and we would understand Filipino names in our accent. Trying to sound like you are from another county is stupid. Not only did you murder people's names, you look stupid doing that.

But I found Cliff to the worst host for any event ever. If you are an events coordinator, don't even think of putting him in the list of possible hosts. Each participant was entitled to be picked fairly in the raffle draw. But he only drew from the raffle box once and decided on his own who will win based on who got his attention the best. In this way, the opportunity to win fairly is lost and became totally reliant on Cliff's bias. I hope nobody hires Cliff to host another event where a raffle is to be drawn. I noticed that the stage manager had warned Cliff to draw a stub from the box but he brushes his instructions off by saying, "Okay, I'll draw once but after that I'll do it my way". My friend says he is famous but since I don't watch TV I have no idea who he is. All I know is he is a host who has an attitude problem. 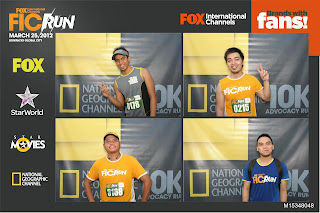 Despite the unprofessional hosts, the race was still a great race. All hydration stations was prepared with cold powerade and water. The usual quality you get from a Run Rio race, worth the price.
Posted by Thirdy Lopez at 9:04 AM