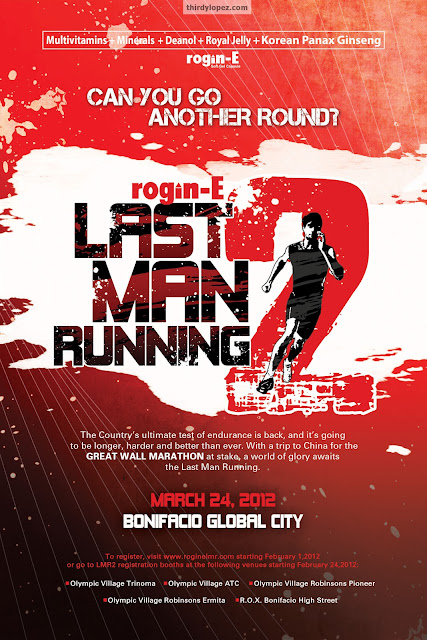 It's back and here are the mechanics:

3.    To register for any of these races, entrants may register online at www.roginelmr.com, or visit Last Man Running 2 registration booths at the following venues:

4.    Walk-in participants are also welcome to register on the day of the event, provided they register at least one hour before gun start of their chosen race category.

5.    Participants must fill out the registration form which covers a waiver of liability and pay the corresponding race fee :
Registration is inclusive of a singlet, timing chip, race bib and meal stub (meal can be claimed at the breakfast banchetto).

1.    These categories will have separate race courses, several convergent points with LMR, particularly near the finishing stretch. Furthermore, these two races will end at the finish arch.
2.    Runners can stop at the 5k/10k mark, but they can also take on the challenge of a further 2k or 4k.
3.    The top male and female finishers per race will receive cash prizes as follows:
5+2k Race- P5,000.00 each
10+4K Race – P10,000 each


FOR LMR
1.    Rogin- E’s Last Man Running will be capped at about 7 hours. One lap is approximately 10km.
2.    Those who wish to register for LMR must submit (in addition to the other requirements) proof of participation in a full marathon (42.195km or longer) within 6 months prior to LMR, OR a medical certificate from a physician indicating participant’s fitness to participate in such a competition.
3.    Participants must check in 30 minutes before gun start. Those who fail to check in will be disqualified.
4.    All LMR participants will be given two race bibs with identical numbers. These must be pinned at the front and back of the runner’s singlet.
5.    The male and female runners who sustain the nominated pace throughout the marathon and run the furthest distance will be declared as the Last Man and Woman Running.
6.    In case there are no more runners during the 7th hour, the male and female runners who stopped running last will be declared as the LMR and LWR. Runners should sustain the nominated pace throughout the race to be qualified.
7.    There will be markers every 100m along the perimeter of the route to help runners determine the distance they’ve ran.
8.    All LMR participants will be handed colored strings for every hour they successfully complete.
9.    ALL LMR participants must maintain the nominated pace:

10.    LMR runners must maintain the nominated pace per hour, as guided by the Rogin- E pacers. Runners who fail to maintain the minimum pace will be swept off the course by roving or stationed race marshals.

11.    At no time during the run are LMR runners allowed to stop, except for the following cases: lavatory break, to hyrdrate at hydration stations, to eat at carboloading stations, sponge bath, or to fix running gear. They MUST rejoin the RUNNING GROUP and maintain the current nominated pace. Any other reason for stopping will subject the LMR contender to disqualification.

12.    LMR Runners may withdraw from the race at any time during the 7-hour period. Upon withdrawal, all colored strings given during his/her participation in the run will be collected by the nearest race marshal. Likewise, all runners who were swept off by race marshals must surrender their strings.

13.    The organizers of LMR and its appointed race officials reserve the right to declare any LMR contender unfit to continue with the run upon recommendation of the race medical team.

15.    At exactly 7 hours after gun start, all race marshals will simultaneously blow their whistles to signal the end of the endurance race. All participants of LMR who are still in competition will be assisted right away by the most proximate race marshal. His/her race bib number and exact location (from the nearest distance marker) will then be recorded and subsequently submitted to the chief race judge to determine LMR and LWR winners.

16.    The Last Man Running will be awarded a trip to Beijing, China and entry to the Great Wall Marathon worth P150,000. The Last Woman Running will receive a cash award of P20,000. 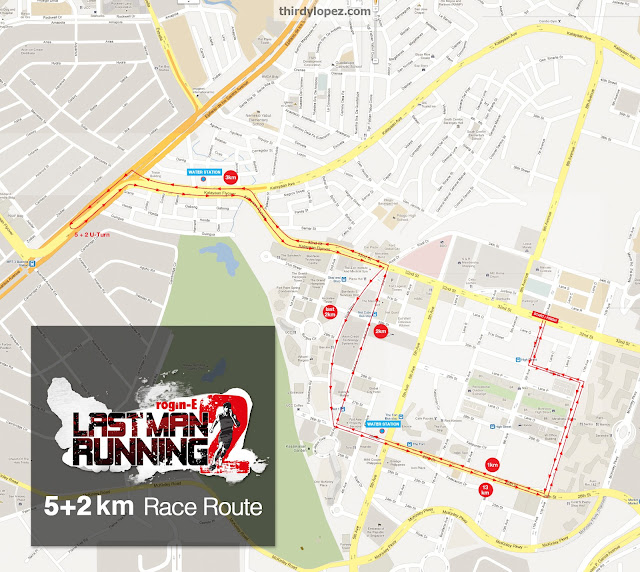 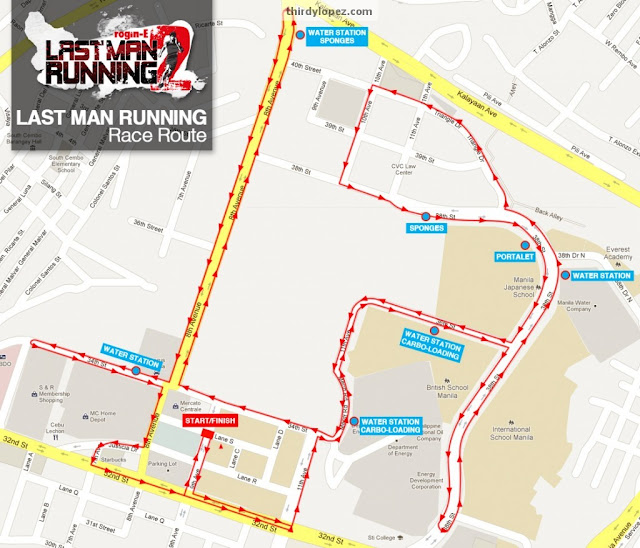 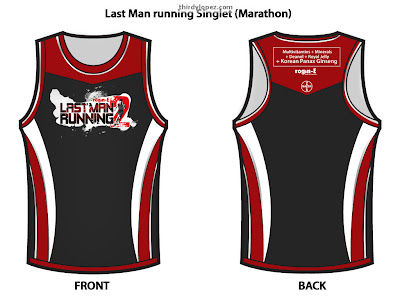 Only those who can submit proof of having joined a marathon within the last 6 months will be allowed to join LMR.  You may also submit a medical certificate stating that you are physically fit to join the 7 hour run. The official registration form also includes a waiver that must be signed.

No. There is a nominated pace that must be followed.  Runners are only allowed to break the pace in the following instances:
•    when they need to take a lavatory break
•    to tie their shoelaces or fix their running outfit
•    to hydrate at water stations
•    to eat at carboloading stations
•    to sponge bath

•    Can I go faster than the nominated pace?

For the first 6 hours, there is a required nominated pace that each runner must follow. At the 7th hour, remaining qualified runners determine their own pace. The first male and female to reach the finish line then will be declared the winners.

•    What if I fail to maintain the pace or stop to walk for reasons other than those allowed?

If you have not maintained the nominated pace, you can still continue to run for the duration of the run (2:00- 9:00am) but will no longer be qualified to be a winner. To signify this, a race marshal will remove one of the 2 race bibs given you. Also, you will not be able to get your official time for the entire duration of your run.

•    If I am not able to maintain the nominated pace, can I still get a medal?

Yes. All LMR runners will get a medal for taking the challenge.

Instead of doing the usual 5k and 10k runs, Rogin- E would like to challenge runners to go beyond their limit by running an extra 2k or 4k.

Last Man Running 2 is brought to you by Rogin- E. Rogin- E has a unique combination of Ginseng for endurance, Deanol for Mental Potency, and Royal Jelly for vitality.