The Ateneo Aquathlon is an annual event organized by FAST Swim Team in their off season. It is one of the few aquathlons in the metro so my team (PEx Swim Team) and I didn't let the chance to participate in a swim (and run) event.

Honestly, I made plans to spend the whole of February to train for this event. However, run events came and I had to prioritize them. I tried to veer away from running long distances, though, so I would get any injuries. Also since this event required swimming, I had to log meters in the pool, which I couldn't do if I'm running an event in the morning. 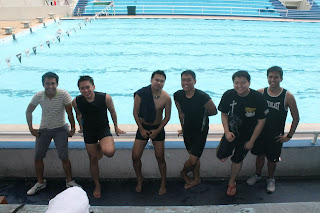 I dedicated my first week of February weekend to running Condura Skyway Marathon. The next weekend I did our monthly wall climbing sessions with Lee and ran the Race for the Orphans event so I skipped my swim training again.

Fortunately, I was able to go back to the pool on the third weekend Saturday which I was able to do 1k as advised by a friend who already did an aquathlon. But since I was also doing other physical activities, I had to rest the next day as I was too weak. 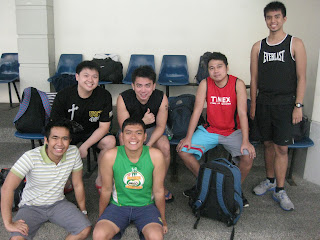 The week before the actual event, I gave up my Runew racekit to Cath (Pex Running Club team mate) who did 10k there while my team (PEx Swim Team) and I planned to do a dry run of swimming 600m and running 5k but since everyone else was late. We arrived in Rizal Sports by 11am and the pool closes by 11:30am. We rescheduled the dry run to the afternoon at MASA (Makati Aqua Sports Arena) as I am afraid of direct sunlight. At 4pm, we timed our 600m swim and I clocked at 20 minutes. We were supposed to run right after running but we wanted to run in BHS (Bonifacio High Street) so we took a short ride where we ran 5 loops in BHS. 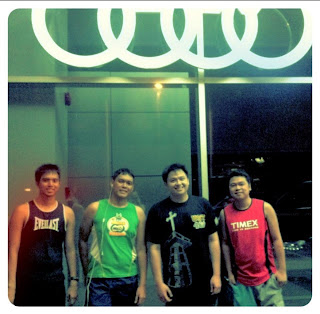 After 5 loops in BHS

It was a fine training but too challenging so we just made it a goal to finish our first aquathlon.

As usual on race day, I had to get up extra early so I won't be late and since the venue would be all the way to Ateneo I had to give ample time for commute and my teammate Ae is an age group earlier than my gun start so I traveled extra early, too. 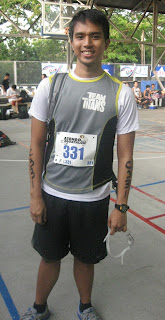 We arrived in Ateneo earlier than our check in time. It was great to see former classmate and now triathlete, Ron Fontanillas, who was teasing me on being on the 26-29 age group (Matanda na daw!). Gelo, who was sick and cannot participate in the event, also went to cheer Ae and me. I also met fellow Titans, Noel, Ian and Bob who were early for their check in times, too. 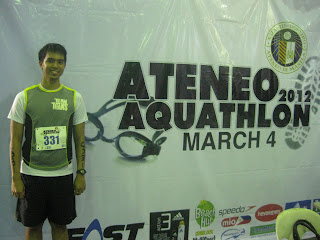 On the Stage before our races began

At around 6:30am, Ae's age group was about to start so I went with Gelo to the spectator area to cheer him, as well Ian who's in the same age group, until their first round of 200m swim. But since my category was also about to start, I ran to the assembly area and prepared for my turn to swim. I checked in my stuff and prepared my things and prepped my watch. 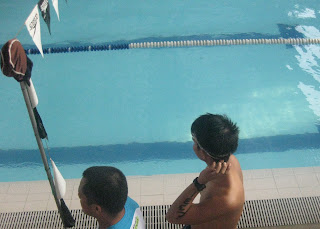 At 7am, I began swimming in our age group. I found gym instructor, Erik who was also in my age group. I was at the last wave and I didn't want to sprint so I could save energy for the run. I tried to not stop except for changing lanes and I was able to do that. I have to learn efficient ways to turn and to dive, though since I wasted a lot of time at doing turning and jumping to the the 1st lane. 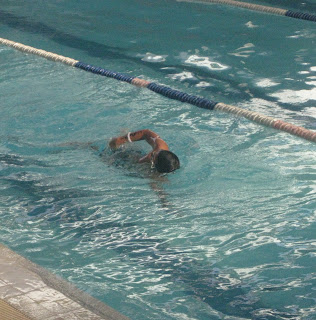 My transition was fine. I didn't take a lot of time even if I wore socks. Next time though, I should wear a visor since my hair looked weird in all of my pictures. 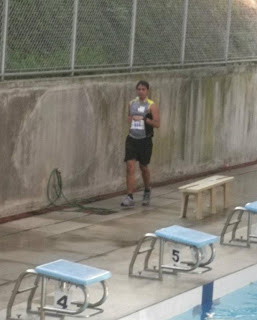 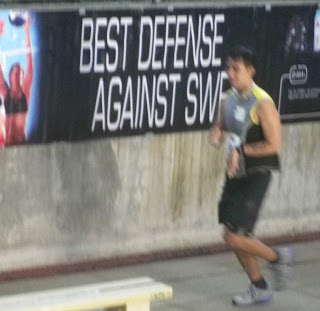 In running, I decided to wear my Team Titans singlet to represent (!!!) as of most of our teammates were supporting Run United 1. I planned to speed up in running but I just ran on a steady pace for 5k so at the time I reached the Finish Line I wasn't exhausted yet. I forgot to time everything (sa kaba!) so I would be dependent on the official time of the organizers. I guessed I finished at 50 minutes, wherein I felt I could have done better but I was trying not to be burned out at any part of the event so I took it slow, steady and sure. At least I already set a Personal Record and my next aquathlon should be another PR, aiming at a better finish. 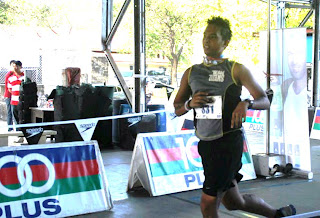 To the Finish Line 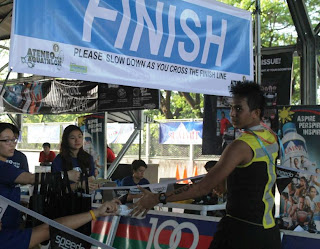 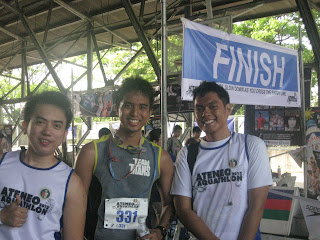 Swim Team after my Finish

There were 2 hydration stations in the 5k route and one after the 600m swim. The route wasn't cleared of cars so runners had to run at the side walk and run extra careful to avoid the cars but that's forgiveable with the number of registered participants. 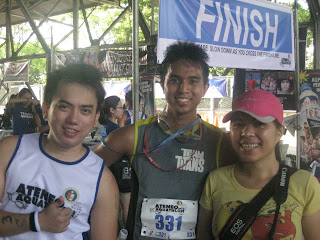 Spectators were also allowed to cheer their friends which made it extra special as teammates, Gelo and Myra, were there to take our pictures and cheer us on. I was also able to cheer for and cheer with Team Titans since we ran different age groups and categories. 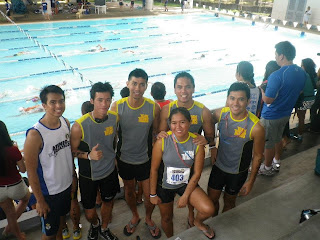 Team Titan Aquathletes minus Bob,
who was prepping for the Lite category

There were a few mishaps with the race results for some age groups. Hopefully they would have my results error free. Shower areas were also closed which was an inconvenience to participants who wanted to clean up before going home.

Overall. it was a fun race and would definitely keep this event on my calendar next year. Also, I hope more people from my teams also join us too.

Image Credits to Myra, Bob and Ian.
Posted by Thirdy Lopez at 10:39 AM

I want to try this!