Last Monday was a pretty stressful day at work. So I am extremely thankful that I was able to cap it off with a class of Fly Yoga. It's been a while since my last Fly Yoga class and I was excited to do all kinds of poses with the hammock once again.

The class started at 7:40pm which gave me a lot of leeway to finish all my tasks for the day. Teacher Isla was teaching that class so I was in familiar territory. I was the only boy in the room as the class was all girls (may be a good thing, may be not... hmmmm...)

Anyway, the class started with teacher Isla talking about Fly Yoga and the poses will be doing.  That night, we did a variety of poses from standing to aerial poses.

We warmed up on the floor with Sun Salutations.

A pose in Sun Salutations as exhibited in the Yoga Launch

Then, we used the hammock to do leg raises.

Leg raises as exhibited in the Yoga Launch

Then, we did hip circles. I thought I didn't know what that was until the rest of class did it.

Hip Circles as exhibited in the Yoga Launch

Then, we did downward facing dog and its variations with the fabric. 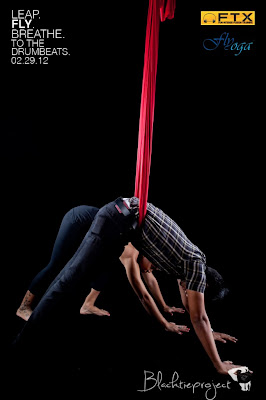 After which, we did the scorpion pose. It was so cool that I was able to do this pose since I wasn't even able to raise both my feet in the yoga launch photo booth.

Scorpion Pose as exhibited by Isla's posse in the Yoga Launch

Towards the class ending, Isla said we'll do aerial poses. At first I was hesitant of doing it but I was able to do them which was great. I needed to incorporate more control though, which is something I could improve on.

Transition to an aerial pose as exhibited in the Yoga Launch

Before the last pose, Isla dared us to try a shoulder stand which I was also able to do. COOL!

Shoulder Stand as exhibited in the Yoga Launch

To cap off the evening, we did the corpse pose which was used to get our bodies back to a relaxed disposition.

How corpse pose would look as exhibited in the Yoga Launch

That was a great class of Fly Yoga from FTX. I will probably be back for another session next month (due to schedule conflicts). If you want to try a fly yoga class, check http://www.gymftx.com for more details.

Photo Credits to:  Black Tie Project
Posted by Thirdy Lopez at 5:38 AM

Sana may Ortigas location to. :)