Run United 1 on March 4 offers a number of firsts 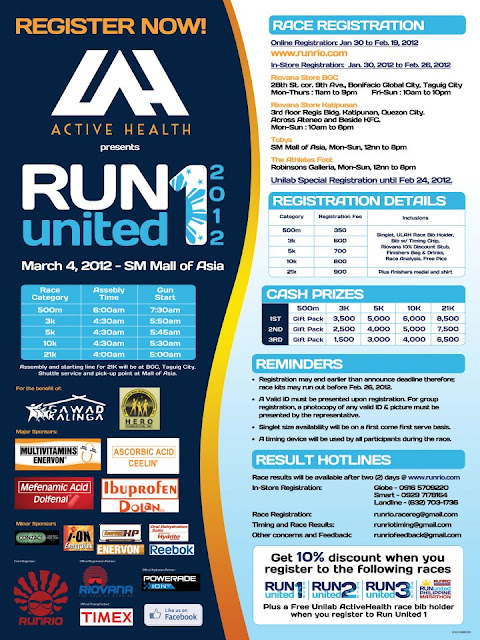 The 2012 Unilab ActiveHealth calendar is off to a raring start, as the registration for its first event this year—Run United 1 on March 4—picks up pace. On its sixth offing, Run United 1 continues to reinvent itself. It is set to once again offer runners a number of firsts.

“This is our first hurrah this year and we very pleased with the enthusiastic response so far from the running community. Registration, both online and in selected stores, is rapidly picking up. We are looking forward to another active year,” said Alex Panlilio, Head of Unilab Active Health. Run United 1 will still feature five race categories: Ceelin 500m dash for kids, 3k, 5K, Enervon 10K, and Enervon HP 21K.

Starting this year, the RunRio Trilogy/Run United Series of races will have different registration or pre-race giveaways. For Run United 1, it will be a race belt or bib holder. Even the medals for 21K finishers are made more special. It will be a collectible medal, thus those who will participate all of the three Run United races during the year, can put together all their finisher medals and form a big Run United medal.

“The joint Run United medals will serve as a true testament of the runners’ commitment to an active and healthy lifestyle. It is a good souvenir of all their 2012 Run United races combined,” said Lester Castillo, brand manager of Active Health.

Besides the new medals, half marathoners will have their gun start at Bonifacio Global City (BGC) in Taguig and finish off at SM Mall of Asia in Pasay City.

“We are very excited about the Run United races this year because we have so much in store for the runners. We are introducing a number of new features to give them even better quality runs because that is what Run United is all about,” said Rio dela Cruz of RunRio Inc.

Children also get to have their own singlet, too. After all, Run United prides itself for having the first to introduce a 500-meter dash in its races. “We really like to get the children get started in running young. So besides the other unique giveaways for them, the singlet is another come-on for them,” cited Dela Cruz.

Interested runners can register at these stores: Riovana at Bonifacio Global City and Katipunan, Quezon City; Toby’s at SM Mall of Asia, Pasay City; and The Athlete’s Foot at Robinson’s Galleria, Ortigas. For online registration, check details at www.runrio.com. Registration is until February 26, but race kits may run out before then, so the organizers urge everyone to register early to secure slots.


Run United is for the benefit of Gawad Kalusugan (the health program of Gawad Kalinga) and Hero Foundation. “Run United is part of Unilab’s advocacy through Unilab Active Health to promote an active lifestyle among Filipino families. Each event has been carefully designed and scheduled with the help of the race organizers and experts to allow each participant to sustain their active lifestyles throughout the year. We would like to thank all those who continue to support the Active Health programs” said Alex Panlilio, Head of Unilab Active Health.

The following are the other events of Unilab Active Health lined up for this year: The Bull Runner Dream Marathon, March 18; Tri United 1, April 14-15; Tri United 2, June 30-July 1; Tri United 3, November 10-11 as well as running and triathlon clinics all year round.

For more inquiries on Run United and Active Health, check out these websites: www.unilabactivehealth.com andwww.runrio.com as well as their respective fan pages on Facebook and Twitter.
Posted by Thirdy Lopez at 2:17 PM

Sobrang passion mo na talaga to no? Really happy for you friend. :)