Condura Skyway Marathon 2012: Run for Mangroves is one of the premiere running event of the country. It started in 2008 as a fun run for runners by runners, supporting an environmental cause. For this year, the running event would be held for the Mangrove Forest in Zamboanga de Sibugay. I posted thoughts before the race in a previous post. This one is all about the actual Condura Skyway Marathon experience.

I slept pretty late for a Condura Runner residing in the Metro since I had a lot of chores. So I set the alarm at 2:30am since Lee and the rest of the group agreed to meet at 3AM. By some weird reason though, I wasn't able to wake up with the alarm. But I got up through Gee Ar's missed call. Since I got everything ready before I slept. All I had to do was fix the bed and change into my running attire and I got to Ayala MRT by 3:40am. I was still asleep as the taxi dropped me off at Ayala MRT but my running friends were understanding so they didn't bitched at the half-asleep Condura runner (me, that much). Funny though that since I woke up late we saw Mia and rode the bus she boarded from Cubao. 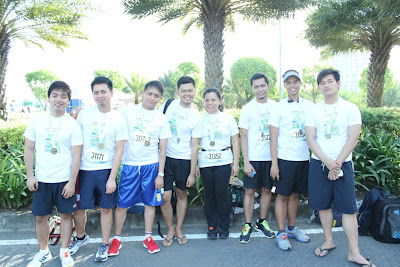 10k runners after the race from Gee Ar

The bus trip to Alabang didn't take too long so apparently Alabang is not so far anyway. Lee was our designated tour guide so he guided us towards the Condura Skyway Marathon 2012 Assembly Area. We arrived at 4am-ish and got ready while waiting for Yuri and Lenon.

At around 5am (which was the announced scheduled gun start), we proceeded to the assembly area where 6 waves of 10k with 500 runners each was getting ready. As we were walking to our place in the starting lime, Mia asked why do the organizers have to make this event so extravagant instead of giving more to the cause. My answer was "kasi maraming reklamador na runners" (runners have a lot of complaints). And true to that answer, Yuri was ranting about not having a projector for the warm up since we were waiting in the Wave C line and cannot see the stage and the girl who lead the warm-up didn't describe her warm-up well. She cheered but didn't describe what she was doing. It was a funny warm up routine as everyone was doing their own thing and the runners behind would be copying the person in front of them. 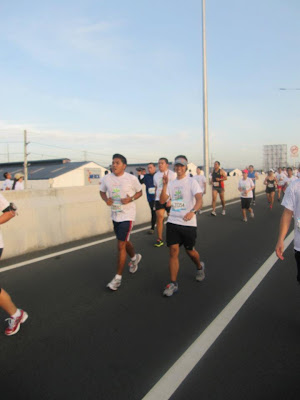 After 45 minutes, we got to the actual starting line and we were gunned to start heading to the skyway. I decided to set a PR (personal) in this race and would run in my own pace so I would be leaving the first time 10k runners (Lee, Mia, Yuri) in their own pace. I would be following the same strategy as in Timex Run 2012. Run slow in 5k and run fast in 5k.

So I did just that, did slower running for the first 5k but aiming to get away from the walking lines. But as expected, instead of doing 5k race pace, I did 5k Farlek (Walking, slow running, sprinting). I got to see some Titans (Team Titan Runners) from various distances.

One personality that I encountered during the later part of the race was this guy who brought his runner dog to run with him. that was so amusing to see him running with his pet owner.

There weren't a lot of photographers in the finish line for 10k runners (and I'm guessing this goes for 5k and 3k, too) so I'm guessing I don't have any photos in the road. This race was unique as those who ran the longest got to spent the most time in the assembly area as opposed to usual races where they don't really get to go in that area since they would be packing up.

Anyway after crossing the finish line, there were a lot of runners but no instructions as to where to go. I remember takbo.ph where marshals and other race employees gave out the medals as you crossed the finish line and I got none of that from the organizers of Condura Skyway Marathon 2012. I had to follow the crowd and line up at a booth where they gave out papers with a packed medal. I found that cold and unwelcoming but I didn't mind it that much since I had just broken my PR. 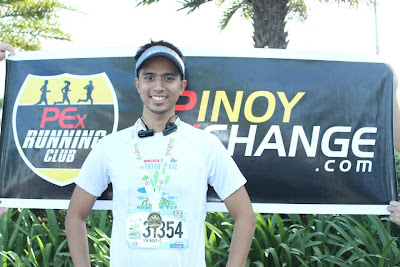 I wanted to go with my PEx Running Club so I went looking for them after I got my medal. I failed to make an appearance with Team Titans so they thought I wasn't there. (Anyway, Titans I conquered the Sky way,  too. See you all in the next race!)

I wasn't attentive that day as I failed to wake up as planned and missed meeting some of the Team Titan runners. It escaped my mind that we'd agreed to meet in the Baggage Area (DUH for me). Gee Ar, Kevin and I were waiting for them in the way to the assembly area for almost 30 minutes. It turns out they were waiting for us in the baggage area.

So we did a couple of group shots and had breakfast at Army Navy/Yellow Cab. Since most of us are tired, we headed straight home after breakfast.

It was a fun morning. It was a great experience.

My official time turned out to be:

Check out your results in the Condura Skyway Marathon 2012 Results Page.

There were 13,000 runners who conquered the skyway. Each runner supported 3 mangrove trees so all of us planted 39,000 mangrove trees. We made a difference in this planet.


Congratulations, all finishers of the Condura Skyway Marathon 2012!
Posted by Thirdy Lopez at 10:22 PM

I hope there would be more fun runs to support environmental causes. Congratulations! :)

Congratulations on finishing your run! I actually had a few friends run in this particular one. One of these days I'll probably try joining one to see just how far I can take it :D

Oh... I saw you there! You have company taking picture with Pinoy Exchange banner. I was sitting there.

@Marco: Next time... Say hello! PEX Runnning Club is not company based. It is a running group formed through pinoyexchange.com. Do check out that site.

Wow! This running is really your passion na. Good for you. Congrats!

Congrats! :D Wish I can try running. I really need to burn a lot of calories.. hahaha.. XD