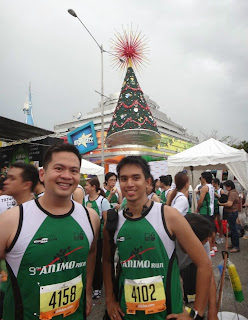 with Emon who ran his first 10k in this run
I originally planned this run to be my first 10k but another fund raising run came and I was enlisted in 10k category and I decided to take the challenge so this became my 2nd 10k run. I wasn't really expecting a superbly organized run since only students organized this run but the failure to plan and coordinate logistics of the race cannot be excused. I was only planning to run with my DLSU Alumni Friends but some Pex Runners decided to join too, which was a welcome addition to this run's experience. 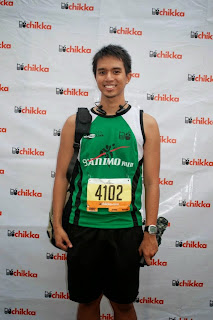 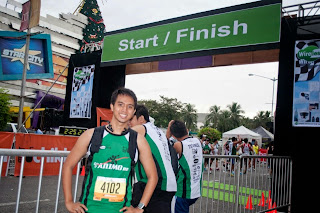 Token start/finish line photo
What was wrong with this? 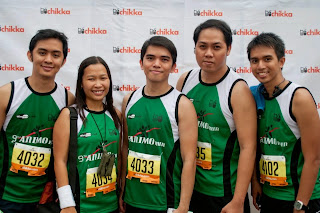 Group Picture with PEx Runners
It was a fun experience nonetheless as I was able to run with DLSU alumni friends and Pex running Club members. I would, however, think twice before joining this again.

Credits to Emon and Cath for the photos.
Posted by Thirdy Lopez at 3:52 PM

Hey kuya Thirdy, so sad that the Animo Run didn't turn out to be good. A friend of mine is one of the organizers and there were so many problems daw with the planning and on-the-day execution of the plans. Naging 1 to 2-man job ang organizing and implementation so I'd like to apologize na rin in behalf of him and his club. Hopefully they'll be able to improve this year's Animo Run :)

Oh, will take note of that if my club organizes another fun run. :D

@sumi: I just hope they learn from this especially since runners are paying big amounts to join events...