Adidas King of the Road is a championship race that was held in various places in Asia like Simgapore, Malaysia, Indonesia and Thailand. the Philippine leg was the culminating race where other Asians had qualified to join.

After my un-eventful performance in AXN runs Philippines, I made it a goal to finish 5k in less than 30 minutes. My training goes like this: 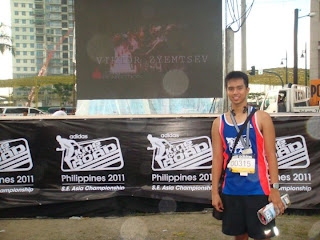 I pretty much followed this training plan but I rested 2 days before the race. This run also required its participants to register and pay online. So we had to go to a pre-event event to claim all the race kits. It turns out that the singlet is too big and you can't change it to the size that fits you. You had to buy another one for P500. I didn't have extra budget to buy one so I didn't get one even if my singlet was too big for me. 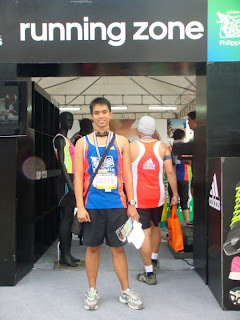 In the Running Zone

When I woke up, I started meditating by saying "I will be finishing 5k in less than 30 minutes" over and over again as advised by Coach Ani de Leon from a Multisport 101 event. I hailed a cab extra early as I was expecting a lot of people since this was a big running event. And just in time since the baggage counter was hard to find and was included in the 2nd wave of 5k. I ran with Dom and her sister since Gee Ar was included in wave 1. Part of the obstacle in running this trying to pass the crowds who block the roads. I did speed up so I would be able to get in front of the pack. The training paid off and I finished at around 28 minutes and achieved my 5k Personal Record (PR).

All finishers was able to receive a very thick medal which as Gee Ar says can be used as a weapon against villains. We had a messenger style loot bag with freebies from all the sponsors. I got to see swimming buddy Christian there who was also getting addicted with Running. 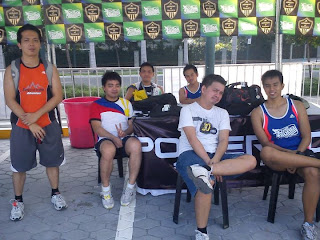 Everywhere the venue, running teams' presence was very much felt and so many runners joined this run that it was a great venue to meet other PEx runners by having breakfast in Market! Market! 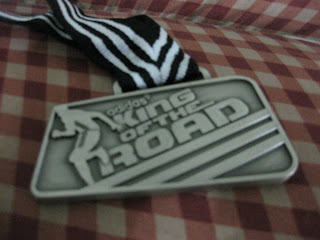 I would believe that Adidas KOTR 2011 is the best race of the year. It was really organized and worth every peso. I just hope that next year they would support a charity.
Posted by Thirdy Lopez at 6:09 PM

wrong caption i guess for the picture with CJ. LOL.