MH Urbanathlon is the only run with obstacles in the Philippines so I didn't pass by the chance to join it. I planned to train for this one but I wasn't able to so I just winged it.

I ran with fellow urbanathlon newbies, Dom, Lee and JR. It was a fast paced run where we had to stop to do obstacles then do more face paced runs.

Obstacles and the Race

The first of which was the UP and Down Obstacle where we had to go up a block.

Up and Down Obstacle started with going up a block

Then, we had to crawl down a net.

Urbanathletes crawling down a net

Then we went up and down a platform.

MH urbanathletes walking on a platform

Lastly, we had to jump over a hurdle. Then, went back to fast-paced running.

MH urbanathletes jumping over a hurdle.
The next obstacle was the Scaffolding Race. We had to go up and down, testing our flexibility.

The Scaffolding Obstacle
After more running, we jumped over hurdles near the British School of Manila.

The fourth Obstacle was the Monkey Bars presented by Century Tuna. I feared this one the most but the marshals helped me crossed this obstacle so it wasn't that difficult after all.

A SM Model leading the pack in the monkey bars.
After more running, the last obstacle was the wall where we had to climb up a wall and climb back down before sprinting to the finish line.

That's me climbing up the wall

Overall, it was great experience I would want to to again. According to people who ran the race last year, this year's urbanathlon was a great improvement. I will run this race again next year! 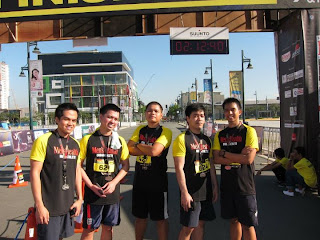 After the race, we met the other Pex Running Club members, Noah, Nollie and Cath to have breakfast with the runners who ran Unilab Run 3 and we had lunch at Gerry's (PRC's favorite hangout). 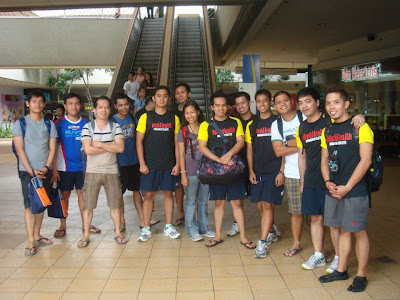 I love the medal's lanyard that I decided to use it in work everyday but I got 2 copies of November to January issues. 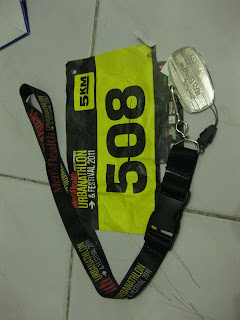