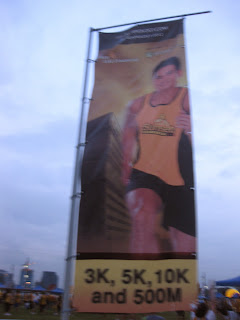 This is the first time I ran a race for free. I was just browsing through my facebook notifications when I found one of my friends had posted his information in the Timex Sports Philippines FB Page. So, I went to that page and discovered that they are holding a promo for free kits to Milo Finals and Sunset SunPiology Run. I posted my information as well and 2 days after they announced me as one of the winners of the free kits for Sunset SunPiology Run.

Since I was only running 3k (but my first 3k in an actual race), I decided to do other things. In the morning, I did house chores. Then after lunch, I went to ABAP for my boxing session with Coach Mitch. The race day was on December 10 and it was already the start of the Christmas season. So when I arrived at ABAP, the advanced students was already prepping for a Christmas salu-salo which I was surprised to run into. It was really awkward to just watch them eat so the advanced members invited me to eat with them. I had a hefty serving even if I already had lunch since the buko pie and the cookies was really heavy for the tummy. It was great to get to know some of them, especially I will be joining them once I get used to the basics of boxing. But this blew my schedule out of plans since I had to start my lesson at 2pm instead of the usual 1pm schedule which left me little rest time to prepare for the race.

As I arrived back at the condo, I just grabbed things I needed and headed out to hail a cab to the Fort for the race. I was almost tempted to blow the race off but it was only 3k so it won't hurt me that much. The venue of the race was at Mercato Central which I had never gone too. I arrived in the venue just at the time the 10k runners started running. As I was trailing to the registration area I even saw Team Leader Drew of ANR Ortigas running at a relaxed pace. Since I had won the race kit, I had to find the Timex people first before running my first 3k race. 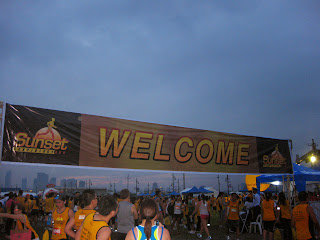 Lucky for me, I was able to get the race kit, leave my stuff in the baggage area and make my way to the front of the line (feeling elite runner lang) in time for the gun start of the 3k. My strategy for this run was to run as fast as I can since the distance was only 3k. Unfortunately, the weight of the Christmas Salu-salo from ABAP weighed me down and I was forcing myself to finish 3k instead of sprinting. I continued running despite of the difficulty and finished at 18 to 19 minutes. 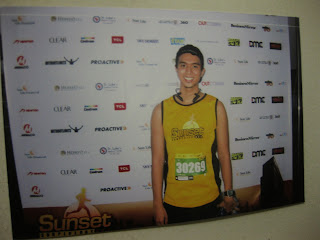 The only proof I was at SunPiology

This was also the first race that I ran alone so the post race stuff was pretty boring. I got my photo from Canon and headed to the booths for free flyers and left before the program started. I even missed seeing Piolo Pascual finished 10k sub-60. I tried contacting TL Drew but I later found out he left the race early too. 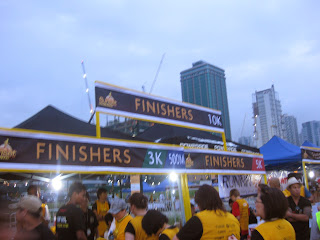 Get the lootbag full of flyers!!

Overall, it was still a nice experience but I would rarely be participating in afternoon fun runs.
Posted by Thirdy Lopez at 4:51 PM