After experiencing my first fun run in May 2011, I was hooked. I decided to join at least 1 fun run event every month.

And for the month of June, my running buddies (Gelo, KC and JR) came into a consensus to join the Slimmerun 2011. It was originally schedule on the end of June but a big typhoon came to the country at that time so it was postponed to the 2nd week of July. 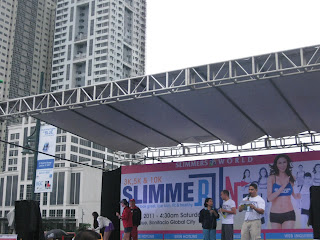 So July comes but the rains are still rampant in the Metro but the run was on still on the GO according to tweets and fb posts so I prepped early in the morning at 5am and asked where KC is (since he was my cab pool buddy) and he was sound asleep. When he finally picked up, he declared the run cancelled and went back to sleep. But I wanted to go despite the rain so I called JR, who was supposed to have his first 5k experience in this fun run event, but he too didn't want to run in the rain. So my last resort to running with a friend was Gelo who wasn't picking so I decided to skip the run too. I changed into my sleeping clothes and was about to shut my eyes when I received a call from Gelo. He was already in the venue and was looking for us. I decided to go and changed into my running attire.

I hurriedly got into a taxi and made my way to BGC. Since I wasn't familiar with the place, as it was also my first time to run in BGC. I dropped off Market! Market! and jogged my way to the starting line. I came just in time as the 10k runner were prepping to start running. I checked my things in and made our way to the starting line but the 5k gun start was already fired so we just caught up with the other runners. 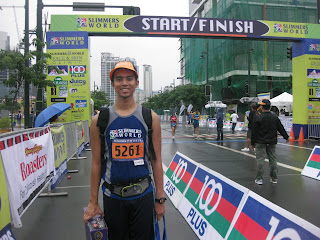 This was my best run so far. It was my first time to run 5k nonstop and the first time I broke my PR and set a new one.

By the end of 5k, I was exhausted so I learned I needed to learn a new skill getting good pictures from amateur photographers in fun runs. It was a fun experience despite the rain and the small puddles of water that wet my shoes.

To cap off the morning, the loot bag was the greatest loot bag ever, it included a box of premium cold cuts from purefoods, tons of giveaways and short lines to eat all you can sandwiches and cold cuts. We spent most of our time in repeatedly getting bottles of diet juices and giveaways and in a long line to a photobooth. 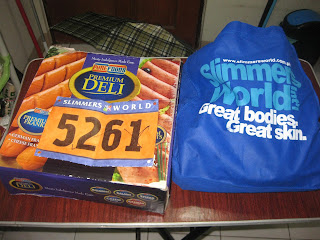 Slimmerun 2011 is the best fun run so far basing on sponsors and the amount of people who joined. I didn't regret the decision of running in the rain.
Posted by Thirdy Lopez at 9:51 AM

will you join the run for pasig river?

@Kay: May drive kang ganyan... It's just for other things...