Run to Build, my first 5k

This may be overdue but like what they say, "Better late than never".

So in this overdue blog post, I shall be telling you about my first 5k experience. 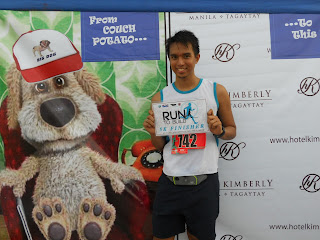 
For quite sometime, I made a goal to join a fun run. I tried to join a friend in a fun run where he ran 5k but I was way too late to join since the registration venue was moved to a farther place.

So later on, another friend told me that he could join me when I wanted to be part of a 5k race. Then, I looked up a race and informed that friend to join this race. My other friend also decided to joined us and we were set to run this 5k race. 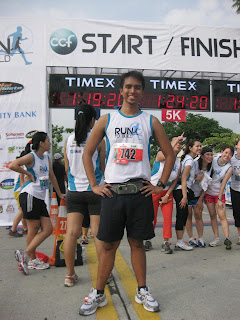 To get ready, I ran every other morning for two weeks. I miss a few days, though.

I got up early since my friend and I agreed to meet before 5am. Then, we got there a lot earlier before gun start. It was a good decision since the race attendant apparently gave me a bib for 10k so I got that change.

My first 5k was great. I ran as continually as possible. I only walked for less than 7 minutes.

I was thrilled to get a good time finish, get the loot bag, take Facebook pictures and get more freebies. The usual fun run event things.

From then, I was hooked to running and joining fun run events.
Posted by Thirdy Lopez at 4:24 PM