I was instantly curious of this opportunity so I introduced myself as a blogger and I found that PEX is inviting bloggers to an exclusive Pizza Hut event featuring their latest endorser, Binibining Pilipinas - Universe Shamcey Supsup.

Excited with the information, I heckled my way into this event and I got an invite the day after.

The event was scheduled on 6pm. Since I leave the office before 7pm, I had to find a way to be there earlier so I watched less TV that day and arrived at the office at 9am. This successful attempt lead me to be able to leave the office at 6pm. However, being in a hurry lead me to forget to send an email to my boss so I was worrying about that during my walk to the event venue. 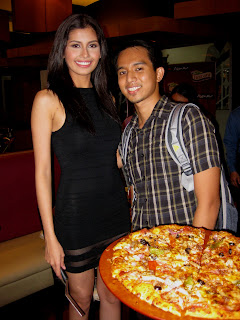 As I arrived, a lot of bloggers were already there swarming around Shamcey. Lucky enough, admin Nakura and my buddy Jean was there to help me get a token picture and get seated with the rest of the PEX bloggers. Aside from having to be acknowledge as an actual blogger by PEX, I got to meet people from my blogroll, Madmader who was also there with madfather; SweetKay (better known as TS to most of the PEX clubs) and jessica_wabbit (foodie whose blog introduced me to Hawker 101).

To tell you honestly, I didn't really remember a lot about the Tuscani pizza as I was enjoying the company of PEX bloggers and the rest of the PEX team. I was also baffled by how respectable Jean, my friend who I know to do crazy dancing and apparently host for the night (at least when he's sober), was. 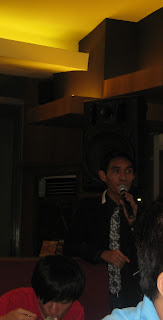 Jean behaving as a respectable member of society
But I do remember how flavorful the All Meat Tuscani Pizza was. I do recommend this for a pizza treat to your friends and family. 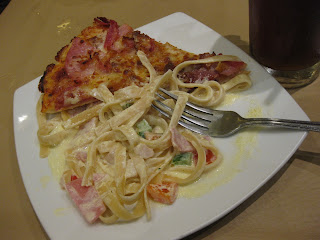 But since Pizza Hut gave bloggers gifts for attending, I owe them a review of the Tuscani Pizza, which I will be talking about as soon as I find time to go on a Tuscani Pizza food trip.

Capping off this entry, I would like to extend my gratitude to Pinoyexchange, the PEX Bloggers club and Pizza Hut for giving us a wonderful night. 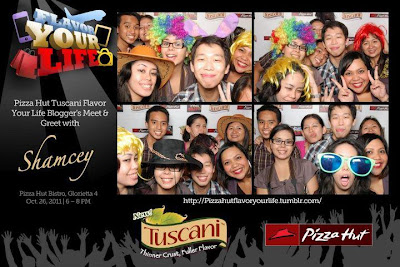 It was nice meeting you! Hope we could hang out with the rest of the bloggers as soon as possible! And oh the Supremo Pizza is awesome! :D hehe.

Sana may next time.

@22mau and SweetKay: Thanks for visiting!