I was reading a blog post, a Men's Health article or other Men's Exercise magazine when I got the idea to blog about my favorite sports. On the top of the list is no other than swimming.

How I learned swimming?

I learned to swim late 2008 with Bert Lozada Swim School (PCA branch) under the instruction of Coach Danny. I wanted to learn to swim the longest time and having a bigger salary than my previous work, allowed me to actually enroll in a swim school. The first link in google when you search manila swim schools is Bert Lozada Swim School which I believe is the biggest swim school in the Philippines. For 10 sessions from November 2008 to February 2009, I learned the free style aka front crawl, backstroke, breast stroke and the butterfly.

For the rest of 2009, I only practiced swimming in the small pool in our condo but I only did it rarely. Just when I felt like I wanted to swim. I think we went on pool trips. At those days, I swam and practiced my strokes.

Last year, I decided to live a healthier lifestyle and I enrolled in Gold's Gym Intercon. Membership in that gym included free use of the hotel pool which had a kid's end at 3 feet and a non-diving adult's end at 9 feet. The gym was near my office so 3 times a week I would go to the gym and in the days in between I would go swimming at the hotel pool. Towards the beginning of 2010, I decided to accompany an online friend at a pool in Makati. The pool was an olympic sized pool called Makati Aquatic Sports Arena. I fell in love with the 50 meter pool. At first, it was extremely tiring to go from one end to another but after a few more practice sessions with more online friends from pinoyexchange. I was able to do 100m laps and I was even able to do a 150m lap at the peak of my swimming addiction. On a practice session, I would be able to do 800m even to 2km during my swimming addiction peak. Unfortunately when it started to rain around June 2010, it became difficult to organize these practice session with my swimming buddies. So I almost regularly, just swam on my own. The was a time towards the middle of the year when we tried to attempt to  make the group swim meetings regular and we did it in the morning but my complexion turned darker because of too much sun and I decided to change my swim schedule to afternoon and my swim buddies started becoming busy again. Due to other schedule conflicts, I wasn't able to swim regularly too but I try to go to MASA for a swim when I could. 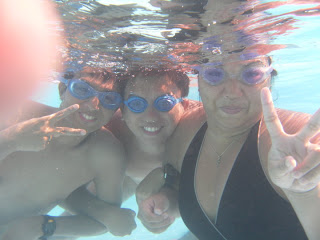 Swimming with Ae and Izzy

I continued to swim not as regularly as I like so at one point, I was only able to swim 500m and I was dead tired. Also this year, I met Kuya Herman in Pex who taught me how to dive and do tumble turns of which I haven't mastered yet. On March, I came to decide that I wanna try doing an aquathlon but the dates of the event and the date of our departure for out KL-SG trip was the same so I had to let go of that event. I was actually ready to give it a whirl. I even had my friend, KC (addicted runner then) to be the runner for a relay but I had to cancel since we were leaving for a vacation trip. 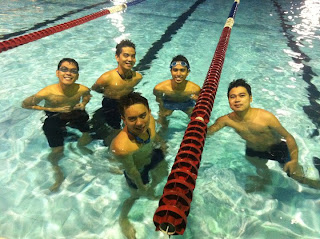 Swim Practice with the rest of the team

Anyway, I continued to swim as regularly as I could but I couldn't do 5 hour practice sessions anymore since I became afraid of having a darker complexion from the intense sun in the morning. Also, swimming with my swimming buddies came less oftern since they started to become all kinds of busy.

However, it doesn't mean I like swimming less. I will be going back to regular swimming by October 1 or 2. I have to start training for the Ateneo Aquathlon next year. Plus, I want to see my swimming buddies and catch up on what's going on with everybody.