As I previously posted, I have been looking forward to the Manila International Book Fair 2011, held on September 14 to 18,2011 at the Mall of Asia Convention Center. And I went to this event last Saturday, September 17, 2011.

Here is how it went:

I woke up at around 10am after late night or should I say morning. With 3 hours of sleep, I prepared and went to Mall of Asia. On my way to Buendia, I remembered that I should have brought the free ticket from OMFLit. But since entrance to the book fair is only P20. I opted not to waste P16 just to get the print-out. So at around 10:30am, I was walking to the Conference Center. Instead of being mesmerized by the amount of books and the deals they can be purchased, I went to the book fair methodically, starting from left to right.

In the far left I encountered, Crossover books which are all P100. Luckily, I was able to get 2 John Maxwell books and one CD. I got all the Maxwell titles except the one in Conversation Tagalog since I wouldn't be able to enjoy such a book in that kind of presentation. Not that I am against Tagalog, I just absorb concepts better in John Maxwell's original language.

Anyway, I continued to walk from left to right when I found the Summit Media booth. I love this booth. I had loots from this booth from 2008. The first thing I did was renew my Men's Health subscription. Since I have been becoming an avid runner, I also decided to get a Runner's World subscription. The booth is giving out 4 free back issues and a MH gym bag for any 1 year subscription. Since I got 2 1-year subscriptions, I got 8 back issues and 2 gym bags. Each gym bag had free Nivea products. So no need to get lotion and shaving cream for the next few months. I also got a Summit Magazine's current issue so I got one more back issue. 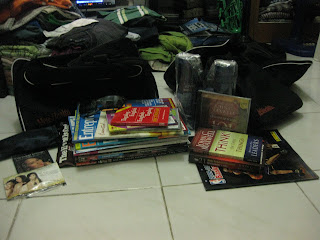 I continued to stroll around the booths for more deal when I got a call from my friend who also went to the book fair. We later went out to lunch after I got a recipe book for grilling and 3 Jughead comic books at P30/each with had a tagalog dictionary which I had no use for.

As I left the convention center, I felt good to have gotten good deals and sleepy for needing more hours to sleep.

I, then went to lunch with my friend and checked out the sale in Penshoppe and other stores in Mall of Asia before heading home. It was difficult to check out sale items when you are carrying two bags full of book fair loot.

But not so difficult that I got sunglasses at Soda for P100.
Posted by Thirdy Lopez at 1:01 PM

You were already home when I arrived. :)

I've never been in a book fair before even though I love books. The prices were really low, indeed. Too much loot! Hahaha!